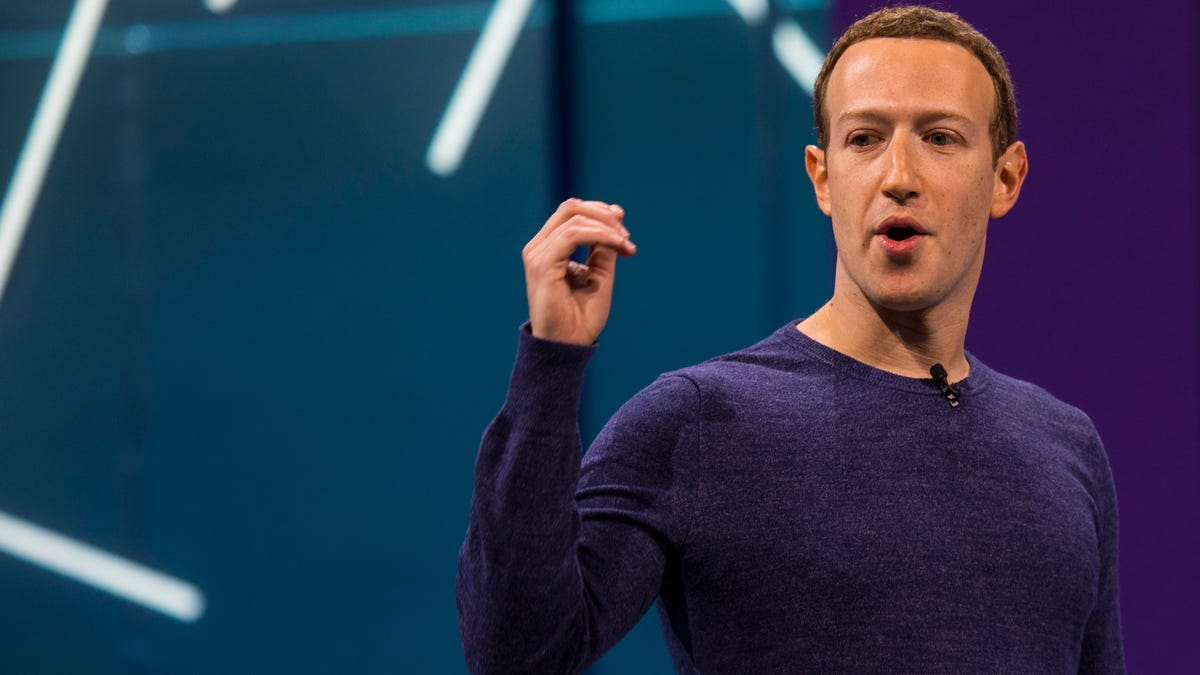 Mark Zuckerberg is ready to “go to the mat” and fight for Facebook if Sen. Elizabeth Warren becomes president. The Facebook CEO said he doesn’t want to be in a fight with the government. But if Warren, a 2020 Democratic candidate, is elected, he expects to mount a legal challenge over any breakup effort. And he expects to win.

That’s just one tidbit from audio of internal Facebook meetings obtained by The Verge and published Tuesday. During two meetings, which reportedly took place in July, Zuckerberg spoke with employees about a wide range of issues, including the company’s Libra cryptocurrency, protecting content moderators and the rise of competitors like TikTok.

Warren has been calling for the breakup of tech giants like Facebook, Amazon, Google and Apple because, she says, they have too much power over the economy, society and democracy. Facebook isn’t just a single social network anymore. the company also owns photo-sharing app Instagram, messaging app WhatsApp and continues to explore VR through Oculus. But Zuckerberg reportedly told employees that splitting up the company won’t solve any issues.

“You have someone like Elizabeth Warren who thinks that the right answer is to break up the companies … I mean, if she gets elected president, then I would bet that we will have a legal challenge, and I would bet that we will win the legal challenge. And does that still suck for us? Yeah,” said Zuckerberg, according to a transcript posted by The Verge. “But look, at the end of the day, if someone’s going to try to threaten something that existential, you go to the mat and you fight.”

Facebook co-founder: Time to break up the social network

“What would really ‘suck’ is if we don’t fix a corrupt system that lets giant companies like Facebook engage in illegal anticompetitive practices, stomp on consumer privacy rights, and repeatedly fumble their responsibility to protect our democracy,” Warren tweeted Tuesday.

What would really “suck” is if we don’t fix a corrupt system that lets giant companies like Facebook engage in illegal anticompetitive practices, stomp on consumer privacy rights, and repeatedly fumble their responsibility to protect our democracy. https://t.co/rI0v55KKAi

Throughout the meetings, Zuckerberg appears to take a more aggressive tone than he has in public, including at congressional hearings. Facebook has been mired in controversy over privacy concerns and election meddling and is facing multiple antitrust investigations. Zuckerberg and other Facebook executives have publicly said they’ll do whatever it takes to fix the social network. During the July meetings, Zuckerberg seemed to downplay criticism, telling employees that it should be expected.

“When the issues came up last year around Cambridge Analytica, I did hearings in the US. I did hearings in the EU. It just doesn’t really make sense for me to go to hearings in every single country that wants to have me show up and, frankly, doesn’t have jurisdiction to demand that,” Zuckerberg said, according to the transcript. “But people are going to use the position of the company and me to criticize us. I think that that’s, to some degree, that’s like a normal thing that we just need to deal with and expect that that’s going to happen.”

Zuckerberg confirmed in a Facebook post on Tuesday that the transcript published by The Verge was from a question-and-answer session he had with employees.

“The transcript from one of my Q&As a few months ago just got published online,” he wrote. “And even though it was meant to be internal rather than public, now that it’s out there, you can check it out if you’re interested in seeing an unfiltered version of what I’m thinking and telling employees on a bunch of topics like social responsibility, breaking up tech companies, Libra, neural computing interfaces, and doing the right thing over the long term.”

In an interview with the Today show that aired Wednesday, Instagram CEO Adam Mosseri said he generally agrees with the comments Zuckerberg made during the meetings, adding that the company’s large size can help it tackle issues like hate speech and election interference on social media.

“It makes sense to us that people would be anxious about our scale,” Mosseri said. “But there’s a few things that it’s really good for. If you want to prevent interference in elections, if you want to reduce the spread of hate speech on the platforms, we benefit massively from working together closely.”

“Generally, I really do agree and stand by the comments that we don’t think it’s a good idea to break us up,” @mosseri says when asked about Mark Zuckerberg’s remarks about any attempt by the government to break up Facebook pic.twitter.com/uOHQW4iHHq

During the meetings, Zuckerberg also made a dig at Twitter and tried to brush aside concern about the rising popularity of social video app TikTok, saying the company is working on its own products to get ahead of the short-form trend.

“It’s starting to do well in the US, especially with young folks,” Zuckerberg said of TikTok, according to the transcript. “We have a product called Lasso that’s a standalone app that we’re working on … We’re trying to first see if we can get it to work in countries where TikTok is not already big before we go and compete with TikTok in countries where they are big.”

In addition, Zuckerberg offered some advice on talking with friends or family who might have a negative opinion of the social network, adding that employees can be ambassadors for the company because they know the “heart” of Facebook.

“I just find that sitting down and talking to people and having them know that you care about the problems and acknowledge that there are issues and that you’re working through them … I think it just makes a big difference,” he said.