On the coastline of Gibraltar, blue metal floaters attached to a former World War II ammunition jetty bob up and down, turning the gentle rise and fall of waves into renewable energy. The floaters were invented by Eco Wave Power, a company that seeks to transform human-made structures like piers and breakwaters into sources of clean energy. 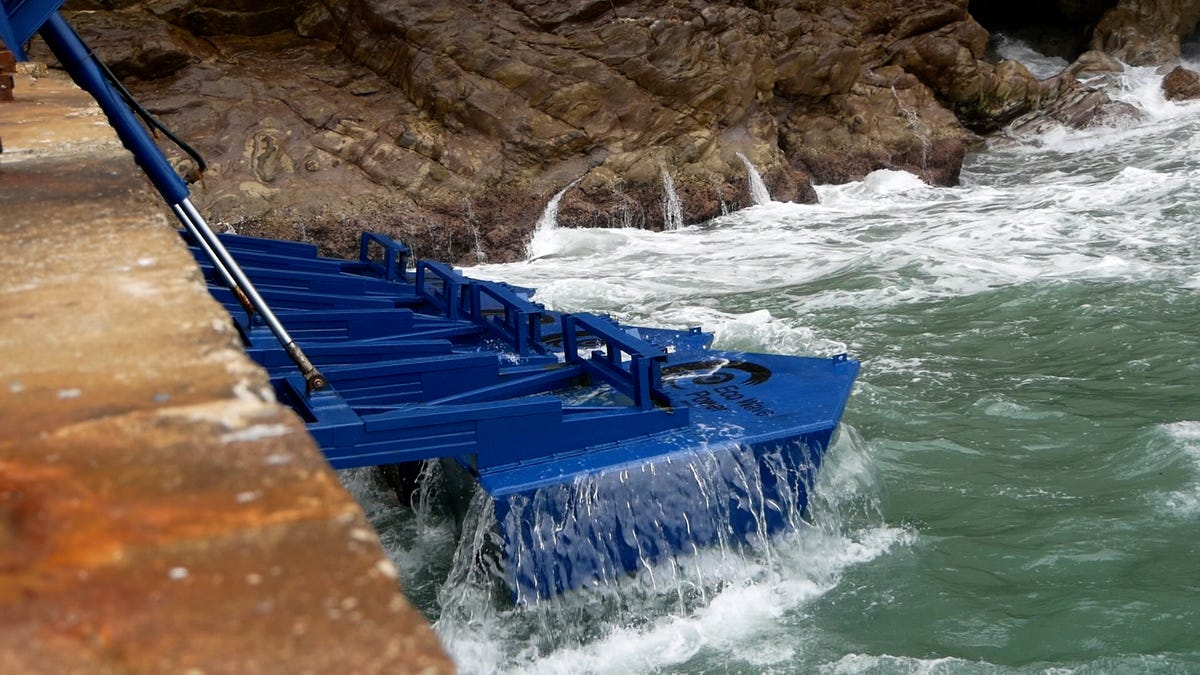 Blue floaters from Eco Wave Power turn the rise and fall of waves into electrical energy.

Each batch of these floaters, per the development team, is carefully designed to suit the specific wave conditions where they’re installed. For instance, smaller waves call for a larger number of small floaters, so they’re easier to move up and down, but larger waves can handle larger floaters – thus, less of them are necessary.

Here’s how they work.

The movement of the floaters creates fluid pressure inside accumulators, which are land-based and built into big blue shipping containers. That fluid pressure, created by the rising waves, turns a hydraulic motor. In turn, that activates a generator, which then sends electricity to the power grid via an inverter. 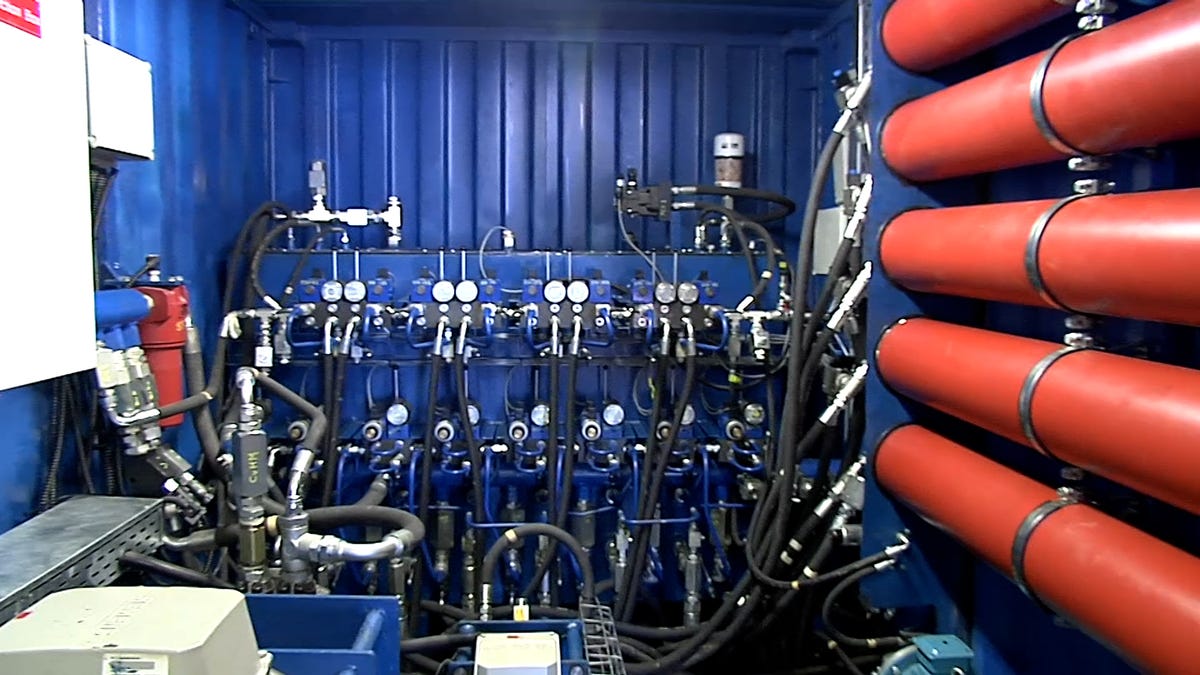 Inside one of Eco Wave Power’s land-based containers, where the hydraulic pressure created by the floaters is turned into electrical energy for the grid.

During a storm, when waves get too high, the unit autonomously locks into an upright position to protect itself, and then lowers back into the water once the bad weather has passed.

Eco Wave Power claims its entire system, from floater to grid, is about 50% efficient, meaning about 50 percent of the incoming wave energy is successfully converted to electricity. For context, that figure is greater than the 15% to 20% efficiency of most solar panels, the 20% to 40% efficiency of most wind turbines and the 33% efficiency of the average coal power plant. 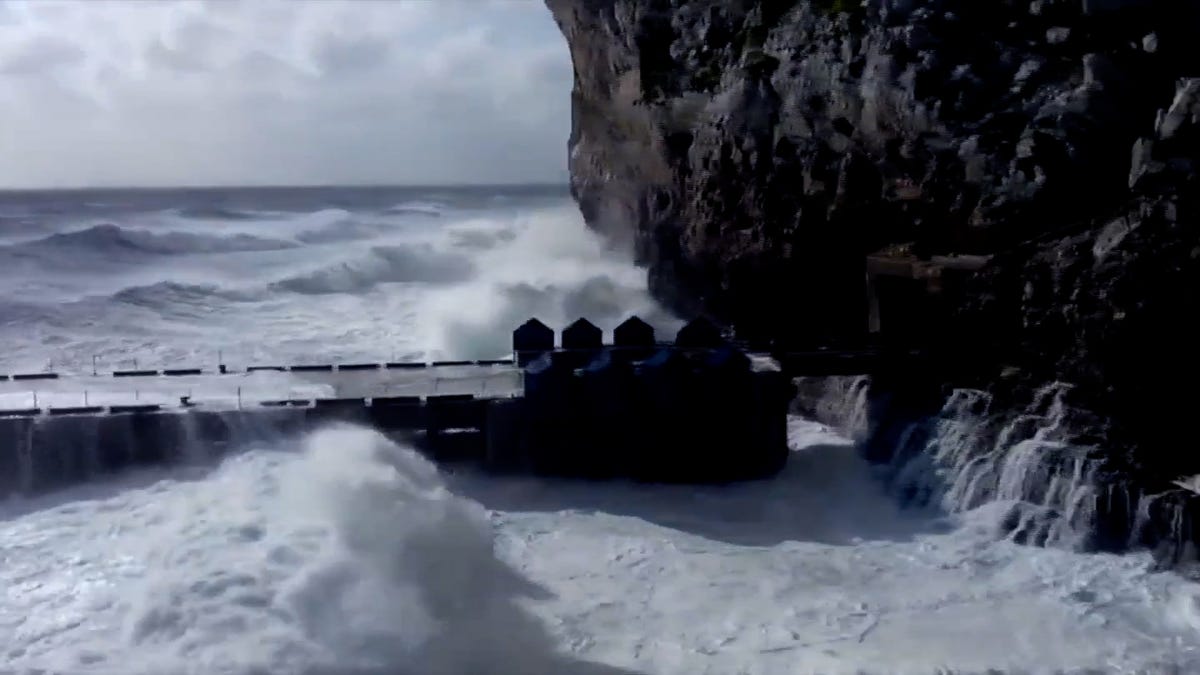 Floaters lock upright during a storm.

So far, the company is regularly providing grid power in a handful of locations – with more on the way. Its first grid-connected station was opened in Gibraltar in 2016, and the company is currently finishing a second one at Jaffa Port in Tel Aviv, Israel. A third in Los Angeles is expected to be up and running in early 2023.

The amount of energy produced per floater is dependent on the wave conditions in a given area. Inna Braverman, co-founder and CEO of Eco Wave Power, said that each of the company’s floaters in Jaffa can generate up to 10 kWh, which is enough energy for about 10 households.

Braverman said the company has conducted a number of environmental surveys that have found no negative impact on the environment, and the fluid that creates the hydraulic pressure within the system is biodegradable.

To see these floaters in action, check out the video.