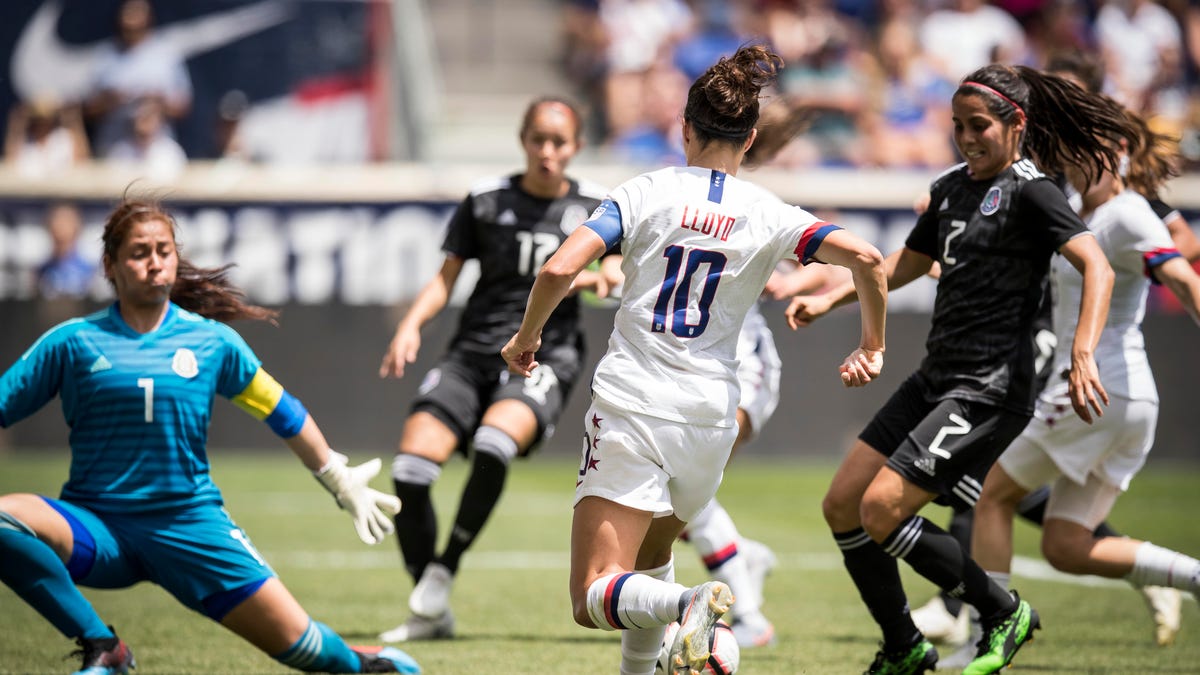 HARRISON, NJ – MAY 26: Captain Carli Lloyd #10 of United States drives to the goal during the International Friendly match the U.S. Women’s National Team and Mexico as part of the Send Off Series prior to the FIFA Women’s World Cup at Red Bull Arena on May 26 2019 in Harrison, NJ, USA. The United States Women’s National team won the match with a score of 3 to 0. (Photo by Ira L. Black/Corbis via Getty Images)
Ira L. Black / Corbis via Getty Images

In the leadup to the eighth ever Women’s World Cup, there’s been a lot of hype surrounding women’s football. Record crowds and ticket sales have set the stage. Even Hermione Granger’s on the hype train. 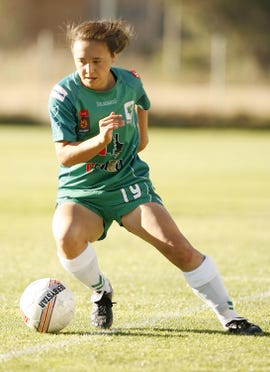 Look! It’s innocent young me kicking a football 10 years ago.

I’m really happy I get to reference Harry Potter. I’m also really happy women’s football has plowed through years of toxicity to get to where it is now. I feel for the players, because I’m not just a budding young journalist. I’m a women’s footballer. My “This is Anfield” plaque beams off the wall in my cluttered childhood bedroom. The early morning practices, the disappointments, the wrecked ankles — I understand what those players have been through. In a way, their success is my dream come true.

I was the only girl in the local under 8’s football team. I dreamed of playing for Liverpool in the English Premier League, and was naively unaware a women’s version existed. The first girl playing with Harry Kewell and Steven Gerrard! Bend It Like — *shudder* — Bisset.

The cool experiences kept on coming. I played for Canberra United in the W-League, the premier women’s football competition in Australia. Four seasons in, we won. We qualified for the World Club Championship and played top teams in Japan. I scored one of my two goals ever for Canberra United.

It got even cooler, literally. My Czech coach used her contacts to secure my first contract with a team overseas. Where did I go? As far away from Australia as possible. Finland! I spent three of my eight and a half months there acclimatizing to sub-zero temperatures, midday darkness, sleet and exotic white flakes of what bilingual locals call “snow.”

Then summer unfurled. I traveled to Paris and Barcelona for the first time, my team won the equivalent of the FA Cup, I continued experiencing Finnish life with the loveliest host family — “Hi, Martta!” — and I tasted salmon soup. That soup alone made the trip.

In other words, as football careers go, I did OK!

Here’s the bit where I go through all the not-so-great stuff about being a “pro” footballer. I keep putting “pro” in quotations because the money I did make largely came in the form of allowances or the now-minimum W-League wage of AU$10,000 ($7,000, £5,500).

Playing women’s football was not a career when I was growing up.

Back to me running around those dew-encrusted fields in Canberra’s winter. One backroad away from the stark LEDs lighting up the mist — my dad. Reading a newspaper in our car under the cover of darkness. His reading material of choice had to last him 90 minutes before he drove me back home, where I’d be greeted with the healthy meal my mum had spent her post-work evening cooking. As my ravenous, unthankful self scoffed it down, I naively ignored another thing: how hard football would be without my parents’ assistance. 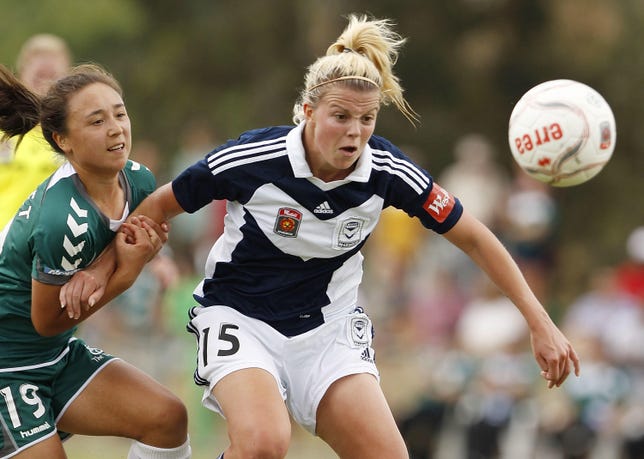 Wow, who knew I was such a dirty player.

Skip forward to graduation. “We know you want to be a pro footballer,” my parents said, “but you need a degree just in case.” It didn’t take me long to realize I’d made a huge mistake by taking French, Chinese and English. In between fruitless, bleary-eyed study sessions I attempted to excel like normal on the football pitch. But my form slipped as my mind chewed on a smorgasbord of new complications. Somewhere in that cloud of anxiety, my passion for football drained.

It was the season after I returned from Finland, having won the W-League and completed my studies. At that point, I was confident. I was the seasoned footballer who’d played abroad. Jari Litmanen? That was a new name I’d learned. But I realized something: I wasn’t the only one who’d had a culturally lucrative stint overseas. Our left back had just returned from Sweden. Our center back from Norway.

In short, I wasn’t the shoe-in for a starting spot I thought I’d be. I suffered a lot that season. I trained like everyone else, five or six times a week, almost bursting with the strain of doing my best. At that point, I didn’t have a job. Outside football I was what’s known as a lady of leisure. Football was all I had.

And it was my worst season yet. I barely played. Still, afterward, I continued to milk my Canberra United reputation. Time to head overseas again, to the Czech Republic, a place of goulash, spirits and fields lumpier than those in Canberra. I rolled my ankle multiple times. I could barely finish the last game of the season.

I’d gone from renewing my hope in sport to returning home with a centimeter and a half of cartilage hanging off my talus bone. That’s the lower part of your ankle joint.

It’s not pleasant, tearing cartilage. I began the next season in Canberra, running through the pain. But I knew I was done. I needed to make a decision, one that most footballers — women and men — face in their careers. Do I get surgery?

My coach suggested yes, and I took that advice. After a very expensive arthroscope, I said hello to crutches and a boot and a year out of the game. During that time, I studied editing and publishing and started looking for work as a copy editor, an occupation previously unknown to me until I harassed my dad to help me find a job. I applied outside Canberra, and moved to Sydney. My time at CNET began. 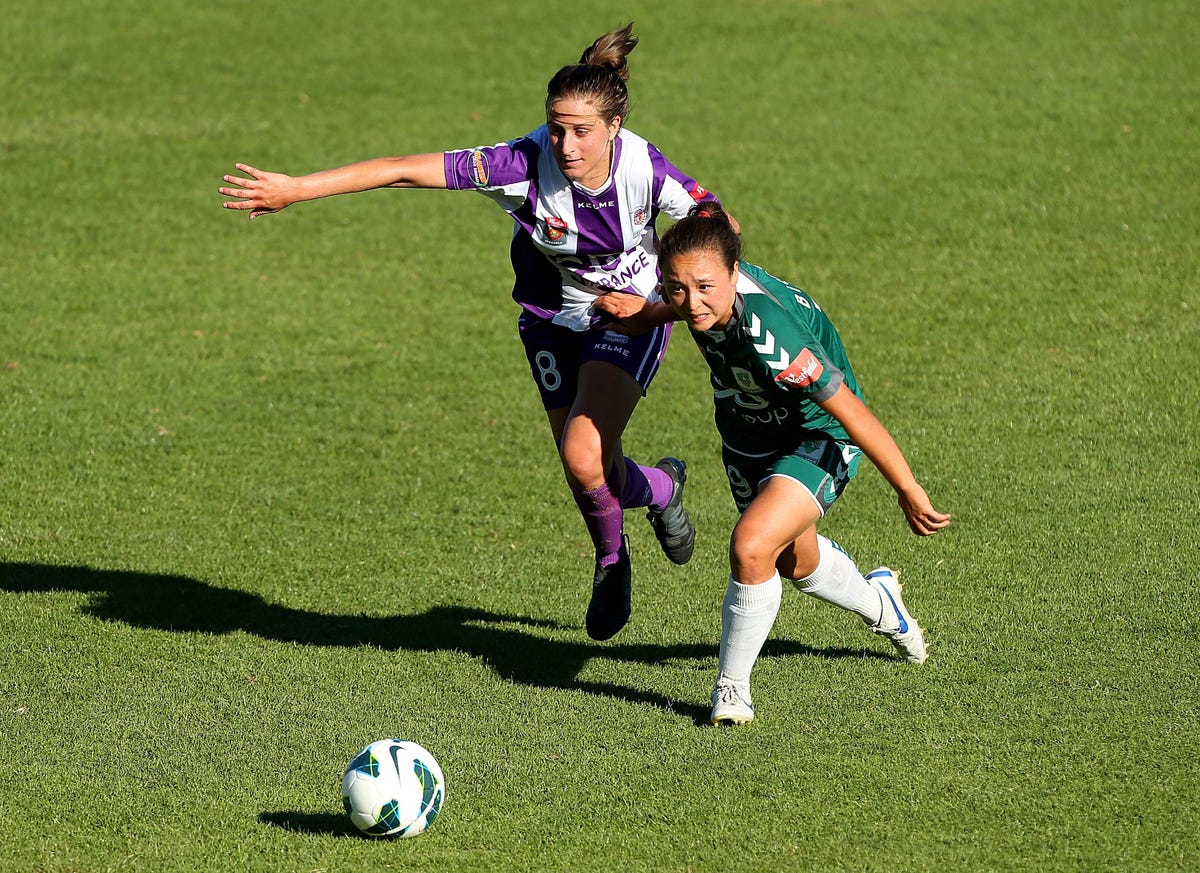 Look at the pain on that face.

But, surprisingly, my football career didn’t end. My phone threw a blip of light into the subway gloom. “Western Sydney are looking for players,” my old Canberra teammate wrote in a text. “Can I give your number to the coach?”

My immediate reaction wasn’t excitement. It was pain. I wasn’t grateful for a new chance to play at a high level, I was stuck on bitter memories of past failures. Regardless, I handed over my number.

Then I discovered training (and trials) were at 6:30 a.m. One hour away from where I lived. Luckily, I’m crazy: I agreed to go ahead with it.

In the early morning darkness, I found the field, didn’t say a word to anyone — and did OK! I ran around as much as I could, stuck my passes and tackled so well I was signed as a defender. I’d never played anywhere farther back than midfield. 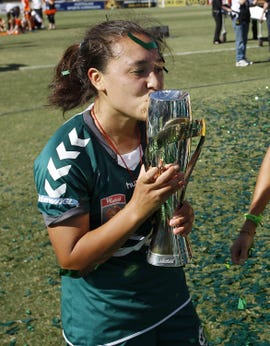 Regular training satisfied my exercise craving, and somewhere along the way I started having fun. I wasn’t focused on making the first team. I weirdly preferred training over the insane games. How insane? Imagine being plonked on a treadmill in the middle of the Australian summer, the voice of your boundlessly angry coach yelling at you to keep running or you’re benched … wait, you’ll take me off? That sounds ideal!

I also became really good at driving long distances every morning, and being super tired at work. I barely had time to eat breakfast and went to bed in a state of mental and physical exhaustion.

It wasn’t sustainable. If it had gone on any longer than four months, the bags under my eyes would be even darker. But that season satisfied a question. Could I play at that level again? Yes. Yes, I could.

When I see the success women’s football has found in the lead-up to the Women’s World Cup, I pause. It takes me a second to realize I’m no longer bitter or in pain when I think of women’s football. I’m happy, genuinely. I’m hoping this article helps with getting those players even the tiniest bit of extra exposure. More people than ever are going to watch the next Women’s World Cup, and one day, we might see equal pay — at the national team level at least.

One thing is clear to me: Those women deserve it.