Women Are Earth’s Biggest Allies. It’s Time to Let Them Heal the Planet 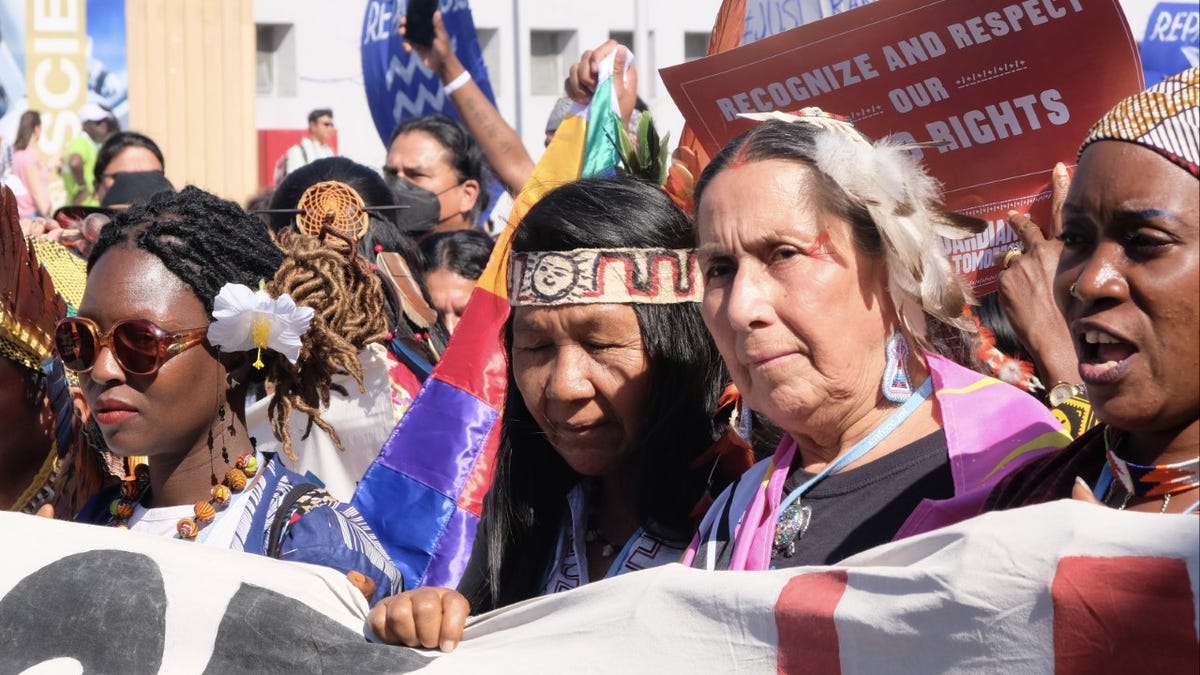 There was nothing to make the “family photo” featuring the heads of state visiting the COP27 climate summit held in Egypt last month especially remarkable. It was hardly obvious fodder for a viral internet moment.

And yet the picture gained considerable attention on the internet based on the only notable thing about it: being overwhelmingly male.

If you only saw this viral photo, you might assume women had been excluded from COP27 entirely. “At this point, maybe we should ask women for help,” tweeted climate scientist David Ho alongside the image. He’s not wrong.

The UN acknowledged the damaging effect of the overrepresentation of men in negotiations, as did the COP27 presidency, as did many men and the majority of women at the conference. And yet consistently women are still underrepresented at the highest levels of leadership.

While the lack of women in high-ranking positions is not solely a climate problem, it’s a problem that hurts our ability to solve the climate crisis. Speaking at COP27, UN Women Executive Director Sima Bahous said women’s leadership is essential to get the world back on track to achieving its sustainable development goals.

“This basic truth is demonstrated time and again,” she said. “Countries with more women in leadership, in the labor force, in peacemaking and more do better.”

Increasingly, we’re all feeling the effects of the climate crisis through more frequent and intense weather events, but women – and especially those from vulnerable countries at the intersection of multiple inequalities – feel them worse than men. A report released by the UNFCCC at the Bonn Climate Conference this June detailed the ways in which climate-related events can result in more gender-based violence. Often this is due to migration putting women and children at risk, and poverty forcing girls to marry early or drop out of school.

Women in many parts of the world also have very few rights over land, in spite of being the ones with most knowledge of local ecosystems, and doing the most to protect those ecosystems. “We all know women are stewards of our planet, be it on peace or climate change, while also often being on the frontline of climate impacts,” Inger Andersen, executive director of the United Nations Environment Programme, said in an email.

With an entire day dedicated to gender at the climate talks, there was no shortage of recognition at COP27 that women are feeling more of the pain from the climate crisis or that they lack a voice. But the solutions put forward rarely lead to any shift in power dynamics.

At last year’s COP26, young women accused the summit of youthwashing after inviting them to speak in front of world leaders, but excluding them entirely from negotiations. A similar pattern has emerged this year. Young women have been invited to address world leaders and negotiators, but are absent when it comes to decision making. The constant toll of being wheeled out to urge the people in charge to do their jobs properly has become grating for some.

At the grassroots level, women show leadership by using their knowledge and experience of working the land, fetching water, cooking and heating homes to develop solutions. But that leadership doesn’t scale up. At higher levels, this knowledge is often treated as yet another thing to be taken from them, rather than a reason to put them in positions of power.

Where are the women?

This year at COP27, there was no lack of smart, wise women. They demonstrated their leadership within their communities, on panels, in protests and among their peers. But they remain underrepresented in negotiations.

According to official UN figures, 40% of registered COP participants this year were female, although when it comes to party delegates – those brought along by countries to be part of their official team – that figure drops to 33%. This means women are more likely to have observer status, coming to the talks with NGOs or other third parties but remaining outside the rooms where decisions are made.

“We need to see many more women in leadership,” said Andersen. She echoed the words of UN Secretary General Antonio Guterres, who has said that male-dominated teams lead to a male-dominated culture. 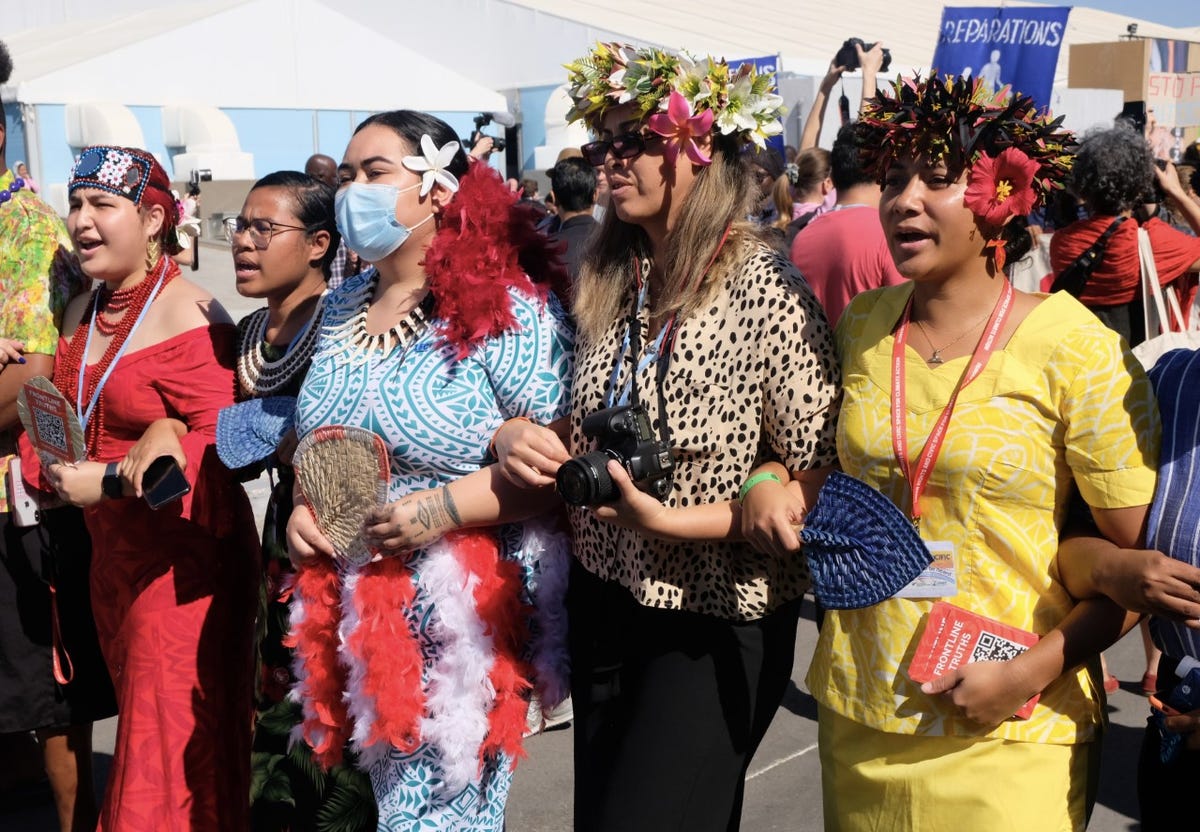 Women came together at COP27 to demand gender-just climate solutions.

“I for one am tired of male-dominated solutions,” she said. Putting women at the heart of environmental decision making is “critical,” she added.

At the top level of COP leadership, there is actually one less woman than last year at COP26 in Glasgow. Patricia Espinosa stepped down as head of the UNFCCC organizing body between summits, and was replaced by a man. Even last year when she looked at the family photo and saw herself in it, she was struck by the lack of women, she said in an interview at the beginning of this year’s summit.

“Look, this is not the picture of what the world should look like in the 21st century,” she said. “And there is such clear evidence that not including women at that level is not good for societies, for the world, for economic and social development, for peace, for stability.”

For many women, including those who have been working on climate issues for many years, it’s not obvious how people secure a seat at the table. “Are we even in the queue?” said Beverly Wright, who founded the Deep South Center for Environmental Justice at Dillard University back in 1992. As an African American woman, she sees this struggle taking place at every level.

In light of the recent overturning of Roe v. Wade in the US, Wright is concerned that “a breakdown of norms” may even be forcing women backward, and she’s not alone. During a panel discussion in the second week of COP27 at the Climate Justice Pavilion, Eufemia Campos Cullamat, a former member of the Philippines’ House of Representatives, described how it was becoming increasingly difficult for women to play a role in fighting the climate crisis due to attacks on Indigenous women and their associations.

Espinosa, meanwhile, was part of the Mexican national delegation that negotiated the Beijing Declaration – a UN resolution regarding women’s equality – back in 1995. She wonders whether today it would have been approved.

“We are looking at backsliding on women’s rights and gender equality in some places, and that is very concerning,” she said. “We should really defend what has been a big, big, big fight for women.”

Everywhere at COP27 outside of the negotiating room, the value of women’s leadership is clear. Women, and Indigenous women in particular, are doing much of the work to protect the environment, while getting their hands dirty with solutions.

“We should probably talk more about women as solution providers, as really a group in society that solves issues on an everyday basis on different fronts at different levels,” said Espinosa.

Rodríguez is a perfect example of this. She has been involved in beach cleaning, mangrove planting and coral restoration projects since the age of 10, after losing her home on the island of Providencia to a hurricane. Later, in 2018, she was part of a group of 25 young people who sued the Colombian government to stop deforestation in the Amazon rainforest and won.

Women working in climate often have little choice but to default to being the agitators and activists. It’s left to them to hold male leadership to account for their failings, and in doing so improve the planet for everyone.

At the opening event of the US Center (the country’s national pavilion) during the first week of COP27, it was only after John Kerry, John Podesta and Michael Bloomberg had left the stage that women were invited to speak. While the men talked up the Biden administration’s work to improve US climate policy, it was left to 20-year-old climate activist Sophia Kianni to call out the fact that a few days after COP26, Biden launched auctions for more than 80 million acres for oil and gas extraction off the coast of Mexico.

Several women I spoke to at COP27 felt that women played a more protective and proactive role than men when taking climate action. “In Indigenous communities, we always talk about how the Earth is female, and how the healing of the Earth comes from mothering, from nurturing,” said Rodríguez. “That’s the way I feel and I think about the healing process we need to go through with our planet right now. She needs nurturing.”