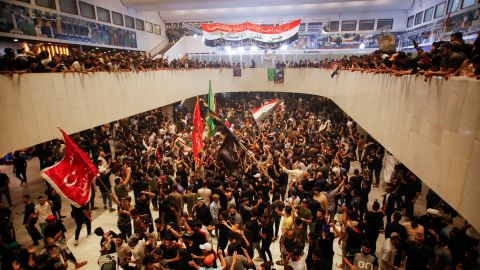 Supporters of populist leader Moqtada al-Sadr gather during a sit-in at Iraq’s parliament in Baghdad on July 31.

Editor’s Note: A version of this story first appeared in CNN’s Meanwhile in the Middle East newsletter, a three-times-a-week look inside the region’s biggest stories. Sign up here.

Iraq is in the midst of its worst and longest political crisis in years. At the center of this overheating conflict stands Iraqi political kingmaker Moqtada al-Sadr and a rival bloc of parties with strong ties to neighboring Iran.

While Sadr’s supporters are rallying against the nomination of a new prime minister, these protests also represent a deep political rift festering between Iraq’s rival Shiite blocs and the influential hand that analysts say Iran is playing from afar.

“Iran will be a party in this conflict,” said Ihsan Al-Shammari, a politics professor at Baghdad University and head of the Iraqi Centre for Political Thought.

“And Sadr is aware that Iran could be what pushes the Coordination Framework to try to inflate its influence in the political scene in Iraq,” he added.

Supporters of cleric Muqtada al-Sadr wave flags in Iraq’s parliament, inside Baghdad’s high-security Green Zone, as they protest against a rival bloc’s nomination for prime minister, on July 30, 2022.

A Shiite bloc that is aligned with Iran and opposed to Sadr, the Coordination Framework includes politicians with ties to Tehran, including former prime minister Nouri al-Maliki. It also includes paramilitary groups that are heavily armed by Iran.

The latest turmoil follows nine months of political deadlock, bickering and accusations that have hindered the formation of a government after Sadr emerged as the biggest winner in October’s parliamentary election.

Sadr’s win threatened to sideline the Iran-aligned Shiite blocs that have dominated Iraqi politics for decades.

In what was described as a ‘tectonic shift’ in Iraqi politics, Sadr in June asked his political bloc to resign from parliament after failing to cooperate with opposing blocs. The move showed Sadr’s true power: his ability to mobilize supporters on the streets in large numbers and with great force.

In a potentially escalatory move, the Coordination Framework on Sunday called for protesters to also take to the streets on Monday.

“Iraq’s political system is on the brink of irreparable collapse and the country is headed toward a civil war between Sadr and his Iran-aligned rivals,” said Ranj Alaaldin, nonresident fellow in the Foreign Policy program at the Brookings Institution, a think tank in Washington, DC.

While some experts say that the current political stalemate is deeply entrenched in the level of influence Iran has over its neighbor, others do not believe Iran drives the conflict.

“I think the motives for this conflict are primarily internal and not the divisions about Iran,” said Mohammed Shummary, chairman of Sumeria Foundation in Baghdad.

“There are transformations taking place within Iraqi politics and rising ambitions from different parties who wish to consolidate power,” Shummary said, adding that accusations of links with Iran have become a tool – primarily used by non-Iran-aligned blocs – to discredit their rivals.

While Sadr has for years positioned himself against both Iran and the United States, the popular cleric has not always held a consistent position toward Tehran.

Once a fugitive from US forces that sought to arrest him in Iraq, Sadr was believed to have been hiding in Iran from 2007. He returned to Iraq in 2011 after striking a deal with the Iraqi government in power at the time.

Iraq's most powerful politician has just caused a 'tectonic shift'

When protesters first stormed parliament on Wednesday, they were denouncing the nomination of Mohammed Shiya al-Sudani for prime minister – a figure put forth by the Coordination Framework and who many see as an ally of Iran-aligned Maliki.

But the real problems go far beyond al-Sudani’s nomination, says Al-Shammari, who added that discontent is primarily centered around what is perceived as Iran-aligned Shiite blocs’ attempts to isolate Sadr and exclude him from politics.

In a statement on Twitter, Sadr called on politicians to listen to protesters’ demands, saying there is now a “golden opportunity to end corruption and injustice.”

Sadr warned if the protesters’ demands are not met, then he is not to blame for the chaos that follows.

“The current revolution is Sadrist,” he wrote on Twitter. “If you miss this opportunity, do not blame me.”

Despite efforts to cool off the tensions, Alaaldin believes that it will be difficult to see Sadr retreating “unless he is given the government he initially wanted.”

“This remains the longest political deadlock [in Iraq] since 2003,” said Al-Shammari, adding that even if it is resolved, it is unlikely to be the last crisis to face the oil-rich country.

“The political system faces great paralysis,” he said, warning that “reaching a moment of collision would indicate that this rift has reached unprecedented levels.”

The first grain ship departing the Black Sea port of Odesa since the early days of the Ukraine war will carry Ukrainian corn to Lebanon, Turkish Defense Minister Hulusi Akar said on Monday.

At least 69 people were killed after flooding and landslides damaged cities across Iran, the Iranian Red Crescent said in a tweet on Friday.

Iran’s deputy foreign minister Ali Bagheri Kani said Sunday that Tehran had responded to an EU proposal to revitalize the 2015 nuclear deal amid reports of Iran’s speedy progress in its nuclear program.

Thousands of protesters rallied in the Sudanese capital Khartoum on Sunday calling for an end to military rule, following a CNN investigation that exposed Russia’s plundering of gold in the African nation.

Clashes erupted after hundreds of demonstrators attempted to head to the Republican Palace – Sudan’s presidential offices – but were met by police, who responded by firing tear gas at the protesters.

The protests come after a CNN investigation, based on multiple interviews with high-level Sudanese and US officials and troves of documents reviewed by CNN, painted a picture of an elaborate years-long Russian scheme to extract Sudan’s riches in a bid to fortify Russia against increasingly robust Western sanctions and buttress Moscow’s war effort in Ukraine.

The evidence uncovered by CNN also suggests that Russia has colluded with Sudan’s military leadership, enabling billions of dollars in gold to bypass the Sudanese state and depriving the poverty-stricken nation of hundreds of millions in state revenue.

The investigation was shared widely in Sudan and caused public outcry. Hours after the report was broadcast, posts began circulating on WhatsApp and other social media platforms used by pro-democracy activists. 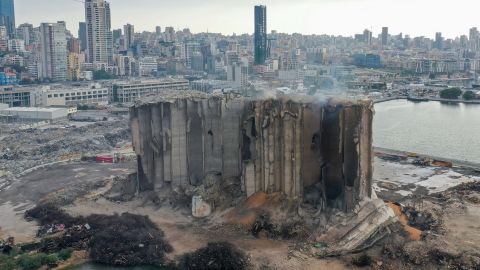 An aerial picture shows the heavily damaged grain silos at the port of the Lebanese capital Beirut, on July 31.

Four days before the second anniversary of the deadly Beirut blast on August 4, the city’s port was trending on Lebanese social media for a different reason.

Two wheat silos in the port collapsed on Sunday. The structures, which withstood the effects of the huge explosion in 2020, have been smoldering and burning for weeks, filling parts of Lebanon’s capital with the smell of smoke.

The flames were caused by rising temperatures in the country.

According to state media, the part that collapsed was the most fragile since the blast and was expected to fall.

This was confirmed by Ali Hamye, Lebanon’s minister of Public Works and Transport, who told Al Jadeed TV that the two silos collapsed, and other silos are also expected to fall apart.

The 2020 explosion took the lives of more than 200 people and injured over 6,500 others. The shockwaves tore through the city, flipping cars, shattering glass and causing some homes to crumble.

The explosion was caused by 2,750 metric tons of ammonium nitrate, a highly explosive material, stored in the port without preventative measures, according to then Prime Minister Hassan Diab.

Lebanon’s economic woes have been no stranger to headlines, but its rate of decline has been exponential in the last two years. Its inflation rate stood at 210% in June, with currency rates changing drastically by the day. 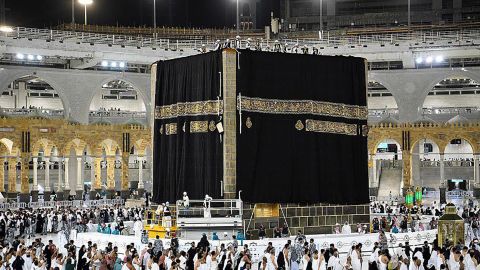 Laborers drape a new kiswa, the protective cloth made of black silk and gold thread, around the Kaaba, in the holy city of Mecca, Saudi Arabia, on July 30.