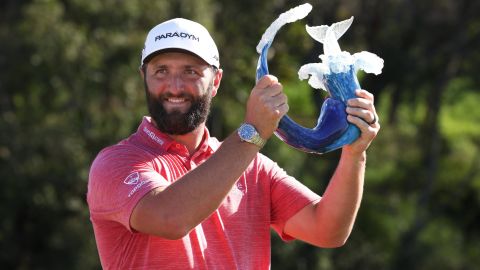 Jon Rahm produced an incredible final round to overcome a seven-shot deficit.

Spanish golfer Jon Rahm won his third PGA Tour title in six starts with a stunning comeback to overturn a seven-shot deficit at the Tournament of Champions in Hawaii.

The world No. 5 even bogeyed Sunday’s first hole but went on a remarkable run to finish the final round with a 10-under-par 63.

Georgia realtor receives invitation to play the Masters by mistake

Morikawa went into Sunday’s final round with a six-shot lead over the chasing pack, but three bogeys on the back nine gave him a one-under-par 72 and allowed Rahm to claw back the deficit.

“I needed to play good and he needed to make a couple mistakes,” Rahm said, per the BBC.

“If you told me at the beginning of the round after that bogey I was going to do what I did, I don’t know if I would have believed you.”

It was the eighth PGA Tour win of Rahm’s career and the 28-year-old will go down as the winner of the Tour’s first “designated” event with an elevated purse, introduced in a bid to compete with LIV Golf’s rise.

It is the first of 17 events this season – including the four majors – that will have the designated event tag, with a total purse of $15 million and Rahm earning $2.7 million for his victory.

Most of the remaining designated tournaments will have total purses of at least $20 million, with the PLAYERS Championship boasting an eye-watering $25 million purse.

While Sunday proved to be a day of delight for Rahm, Morikawa was left disappointed and frustrated with his final round performance, despite scooping up $1.5 million for his second-place finish.

“You work so hard and you give yourself these opportunities,” 2021 Open winner Morikawa said, per the BBC.

“I just made three poor swings, really, at the wrong times. It’s never a good time to put a poor swing on it, but sometimes, it works out and these never worked out.

“I don’t know what I’m going to learn from this week, but it just didn’t seem like it was that far off. It really wasn’t. Yeah, it sucks.”