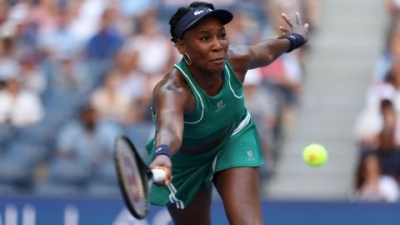 Venus Williams stretches to make a shot during a US Open women’s singles match Tuesday.

A day after her sister Serena advanced to the second round of the singles play at US Open tennis tournament, Venus Williams was not as fortunate, losing in straight sets to Alison Van Uytvanck of Belgium.

Appearing in an Open-era record 23rd US Open, Williams lost her first-round match 6-1, 7-6 (5) at Arthur Ashe Stadium in New York.

NEW YORK, NEW YORK – AUGUST 29: Serena Williams of the United States celebrates after defeating Danka Kovinic of Montenegro during the Women’s Singles First Round on Day One of the 2022 US Open at USTA Billie Jean King National Tennis Center on August 29, 2022 in the Flushing neighborhood of the Queens borough of New York City. (Photo by Al Bello/Getty Images)

Opinion: For Serena Williams, it ain't over yet

She and Serena will play their first doubles match either Wednesday or Thursday. It will be the first time the sisters, who have won 14 Grand Slams as partners, have played together in a tournament since 2018.

Tuesday’s contest was just the fourth match this year for Venus Williams.

“It was definitely the longest time I have been away from tennis and been without a racquet in my hand,” she said referring to her yearlong gap between competitive matches that ended earlier this month. “So it was a completely new experience for me, getting a racquet back in my hand and trying to acclimate as quick as possible to be ready for the US Open, which was not easy.

“Definitely, like, playing lots of great points but it’s just, in the end, it’s just rust. There is nothing you can do about that except for, you know, not be rusty at some point.”

The 42-year-old was the oldest player in this year’s draw and it was her 91st time in a Grand Slam main draw – also a tennis record.

Williams was also asked about her sister moving away from the sport and whether Serena has needed her support. “I don’t know exactly. I think she’s had some time to process it, and she’s doing it the way she wants to. That’s what matters most, is to do things on her own terms,” she said.

Williams didn’t divulge her own plans for her long-term tennis future.

“Right now I’m just focused on the doubles,” she said, adding with a smile that it was Serena’s idea. “She’s the boss, so I do whatever she tells me to do.”

Van Uytvanck, ranked 43rd in the world, will meet Clara Burel of France in the second round. In their only previous match, Van Uytvanck won at the 2021 Australian Open.