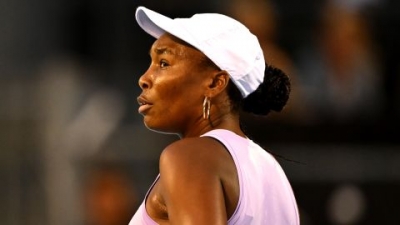 Venus Williams got off to a winning start at the ASB Classic against Katie Volynets.

Venus Williams won her first tour-level singles match in a year and a half on Monday, defeating fellow American Katie Volynets 7-6(4) 6-2 in the opening round of the ASB Classic in Auckland, New Zealand.

The 42-year-old Williams, who won the ASB Classic in 2015 and gained a wild card entry for this year’s tournament, came back from a break down in the first set against Volynets to set up a meeting with China’s Lin Zhu in the next round.

In a close first set, Volynets was serving to take an early lead in the match at 5-4, but Williams hit back by breaking her opponent to love before going on to take the tie break.

She then raced into a 5-0 lead in the second set and had the match wrapped up three games later – her first singles victory since defeating Romania’s Mihaela Buzărnescu at Wimbledon in 2021.

“This is one of my favorite places to come, I was so excited that I made it here … I’m happy to get a win today against a great opponent,” Williams, a former world No. 1 and seven-time grand slam champion, said in her on-court interview.

Last month, it was announced that Williams, who made her professional debut back in 1994, had received a wild card for the main draw of the upcoming Australian Open, which begins on January 16.