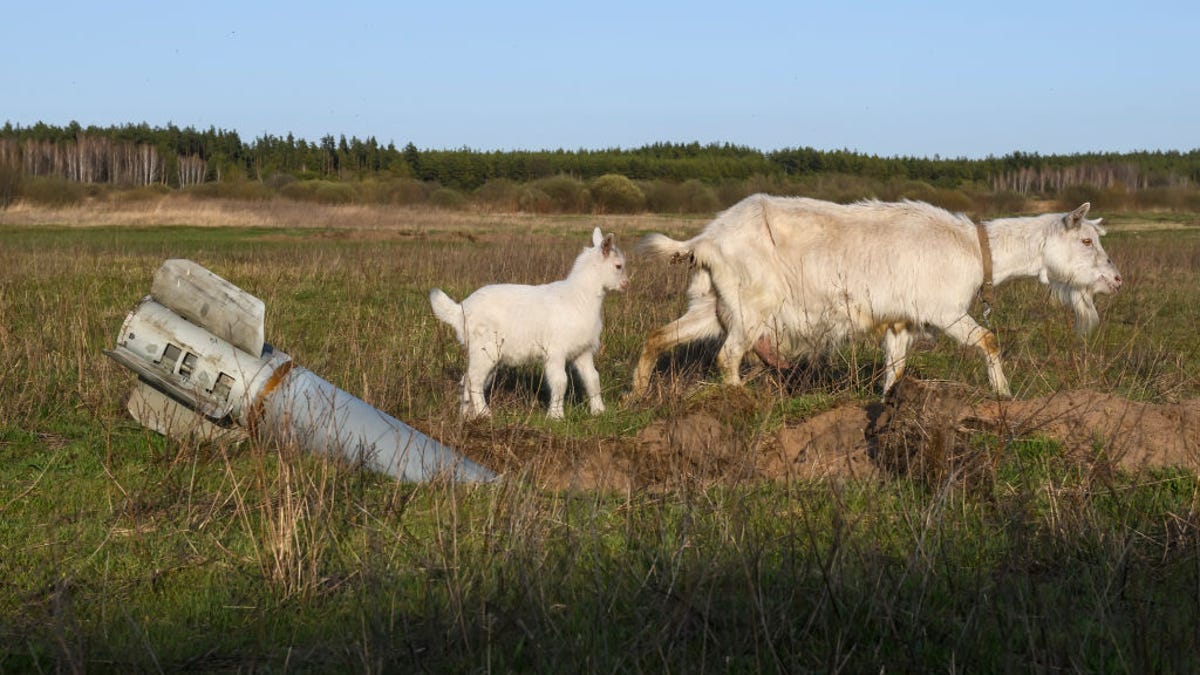 Next door in the Australian pavilion, chipper baristas serve the best flat whites in town, while across the way at the Brazil booth, splashes of yellow, blue and green mingle hypnotically across digital displays. But at Ukraine’s pavilion, all is dark and somber.

This is the first year that Ukraine has had its own country pavilion at the UN’s climate summit, COP27, which is taking place in Sharm el-Sheikh, Egypt, this week. The space functions as a visual metaphor for the current state of the country, with gray slanting walls, a tree trunk studded with bullets, and a tall cylindrical space featuring samples of damaged soil from all over Ukraine — a tomb for the country’s lost and damaged biodiversity.

Over the past two weeks, tears have been shed here, including those of Ukraine’s Minister of Environmental Protection and Natural Resources, Ruslan Strilets, as he welcomed a crowd of reporters into the small space on Monday evening. “This pavilion is a place of unity for all friends of Ukraine,” he said, a single tear sliding down his cheek.

He seemed taken aback by the turnout, with at least 50 people crowding into the small booth, but there’s been no shortage of solidarity for Ukraine at this summit. Russia’s war has not only caused death and devastation within the country, it’s also sparked a global energy crisis that’s caused the cost of living to shoot up all over the world.

Likewise, the destruction of nature in Ukraine — or anywhere else for that matter — is a problem for all of us. As Strilets put it: “The environment has no border.” Nature is one of our most powerful allies in the battle to minimize the worst effects of the climate crisis. It sucks out of the atmosphere all of the carbon we’ve pumped into it over the years, helping to provide some relief to our rapidly warming world. Destruction of biodiversity and natural habitats sets the collective race back, and in Ukraine, the devastation has been extensive.

“The environment is always the victim of conflict,” said Inger Andersen, head of the United Nations Environment Programme, who’s been involved in analyzing the environmental damage of several wars. “Conflict leaves a toxic legacy that is carried by generations,” she added, while speaking at the launch event of Ukraine’s global platform for assessing environmental damage caused by military action.

At the launch, Strilets presented a summary of what has happened in his country. Russia’s war in Ukraine is still ongoing, but in the past eight months since Russia invaded, the conflict has already caused 2,239 recorded cases of environmental damage and placed a fifth of Ukraine’s protected areas under threat. 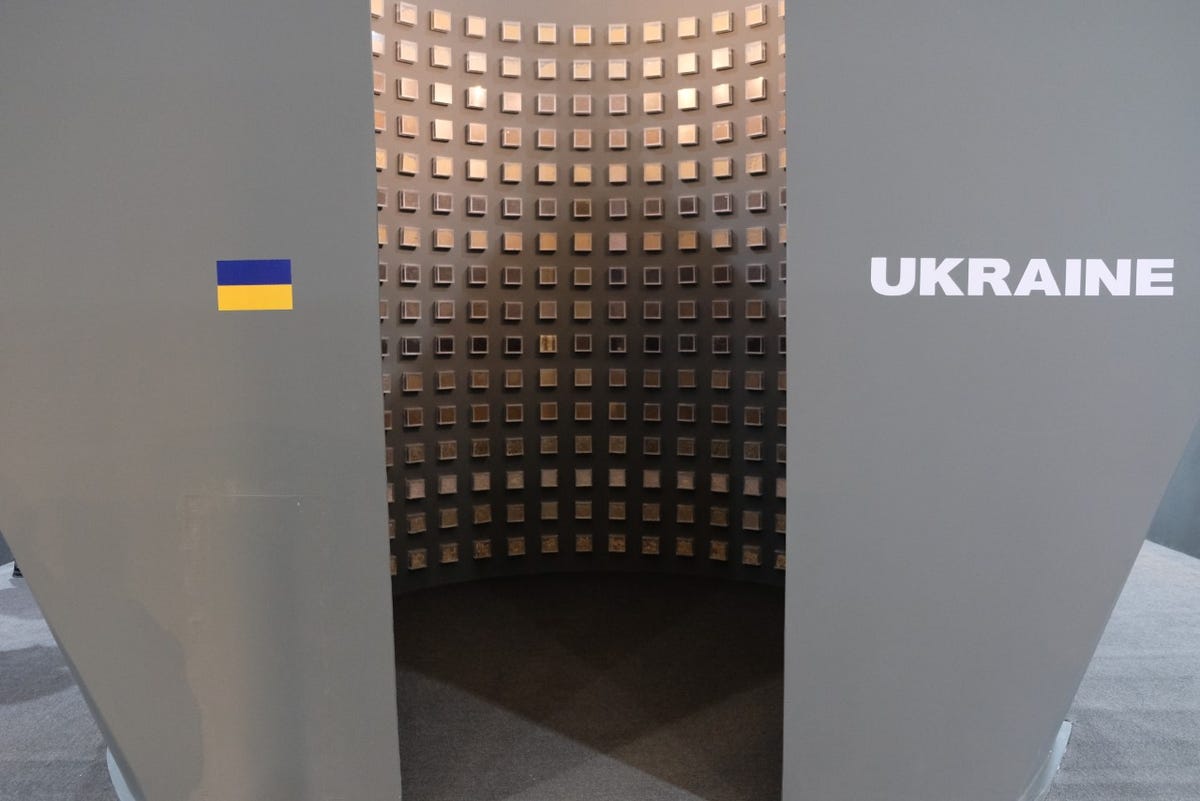 Soil samples from Ukraine displayed at the country’s COP27 pavilion.

Forests in the country have been especially hard hit, as they’ve been heavily occupied by the Russian military and see the heaviest fighting, with many suffering fires. Around 450,000 hectares of forest lie within occupied or hostile zones, with 63 separate forestries under occupation. “The Russians have turned our natural resources into military bases,” said Strilets.

When it comes to biodiversity, around 600 animal species are under threat, and 750 species of plants and fungi, according to government calculations. Since the end of February there have been 120 cases of dolphins being killed in the Ukrainian part of the Black Sea.

This year, Ukraine is on track to exceed its 2021 emissions due to the pollution caused by the Russian military. While the rest of the world is discussing weaning itself off fossil fuels, Ukraine is once again forced to discuss the fight against pollution, Strilets said.

A brighter, greener future for Ukraine

It wasn’t supposed to be this way. Before Russia’s invasion, Ukraine was preparing to formally apply for EU membership, and as part of this preparation, it was planning to align itself fully with EU green directives. But the war has thrown its plans for a green transition way off course.

Now, with his eyes fixed on the future, Strilets foresees a “unique opportunity” to rebuild Ukraine as a green country that generates and subsists on renewable energy. Featured at the Ukrainian Pavilion at COP27 were several exhibits detailing how the country will become a green leader. A printed message from Ukrainian President Volodymyr Zelenskyy read: “Ukraine can, and I am certain will, become a green energy hub for Europe.”

Models of wind turbines were accompanied by a caption explaining the country’s plan to generate 30GW annually of renewable energy by 2030 (it already produces 13GW per year) and export 15 of those gigawatts to Europe. It’s about more than just rebuilding, said the caption said, it’s about creating something new that will make Ukraine an important part of the EU’s energy security.

“Ukraine should march from the ashes of this war as a climate-neutral society,” said Natalia Andrusevych, chair of the board of directors of the Resource & Analysis Center, speaking via Zoom at the event. Andrusevych has written a policy brief on postwar reconstruction that models sustainable development for Ukraine.

This green reconstruction will be astronomically expensive. Ukraine has calculated the environmental damage the Russian military has already caused at more than $39 billion. Speaking over Zoom at the event, Alanna Simpson, lead disaster risk management specialist from the World Bank, said that taking into account the damage done only until June 1, around $349 billion would be needed for recovery and reconstruction.

This bill isn’t just for simply rebuilding what’s been lost, it’s about ensuring Ukraine is well set up for the future. “We don’t want to rebuild a 1960s school to 1960s standards,” said Simpson. Instead, she added, it must be green.

To pay for it, Strilets, Andrusevych and many others from Ukraine are talking about seeking reparations not only from Russia, but also from the fossil fuel companies that are profiting from the conflict. Russia “aims to turn the entire planet into a bomb shelter,” said Strilets, and should be held accountable not just by Ukraine, but by the whole world for the environmental damage it’s causing. 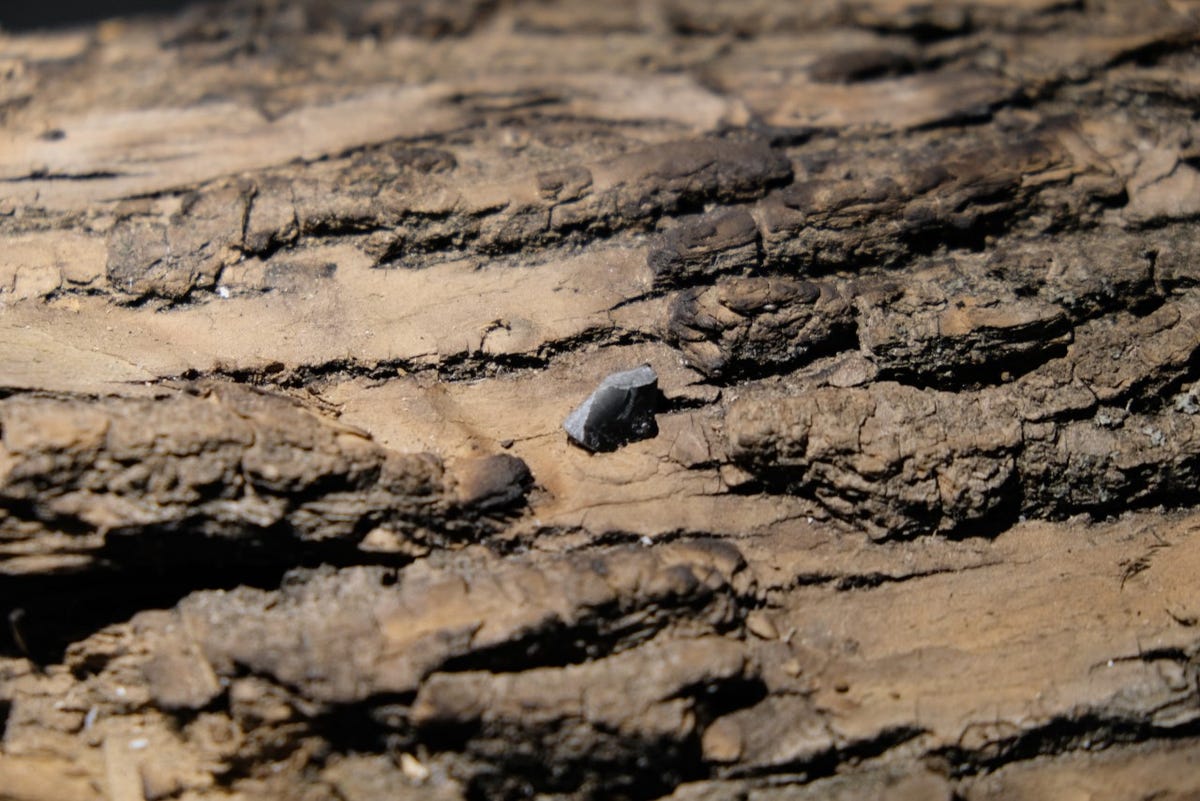 This is a central part of the work the grassroots activist organization Razom We Stand is currently undertaking, said activist and lawyer Svitlana Romanko. She and many other Ukrainians, including those who are displaced or are refugees, have come to COP27 this year because they believe that not enough people understand that the money Russia continues to earn from fossil fuels is financing the war in their country. “Both supply and demand side for the fossil fuel industry need to be seriously cut off,” said Romanko.

Their presence at the conference has brought them face-to-face with members of the Russian delegation and fossil fuel executives, which has left them feeling deeply angry and disrespected. Last week, Romanko confronted Patrick Pouyanné, the CEO of French energy company Total — which Razom We Stand is currently trying to sue. She asked him whether he’ll use the blood money he’s made through Russia’s war to finance Ukraine’s reconstruction. “Probably,” he told her in response, patting her arm in a way she said felt “patronizing.”

Total didn’t respond to a request for further comment.

Romanko’s hope is that any money recouped from oil companies and from Russia is used to help Ukraine decarbonize while rebuilding, spurring the country’s development and making it safe, secure and self-sufficient for generations to come. “We don’t want that cheap, dirty money to rebuild business as usual,” she said. “We want to create a precedent where that money is used for the green transition.”

There are plans in the works to take advantage of greener construction methods and to rebuild in the style of the New European Bauhaus initiative, which brings people from different disciplines together to create sustainable, affordable and accessible buildings.

“We want to be the great powerful example for how to rebuild,” said Romanko. She envisions a Ukraine that runs on “community-owned distributed green energy that does not kill,” and where people can wake up in the morning, look out of their windows and not see explosions, but a safe, green country.

Ukraine has spent nine months under constant bombardment from the Russian military, and is now facing the long, hard, cold winter ahead. In spite of this, Romanko, Strilets and the many other Ukrainians have joined the ranks of those fighting the climate crisis at COP27 and are refusing to let die their vision of a future that’s free of fossil fuels. “Peace and freedom,” said Romanko. “That’s what drives us.”