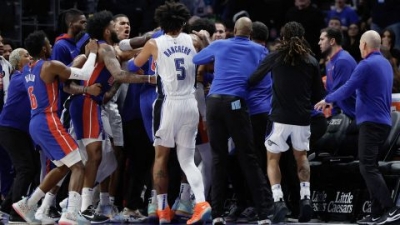 Three players were ejected after a clash between the Orlando Magic’s Moe Wagner and Detroit Pistons guard Killian Hayes sparked a bench-clearing brawl on Wednesday.

It certainly wasn’t anywhere near the antagonism of the infamous “Malice at the Palace” during the Detroit game against the Indiana Pacers in 2004, but the incident still saw Wagner tossed for a flagrant foul and Hayes and teammate Hamidou Diallo ejected for their part in the melee that followed.

DALLAS, TEXAS – DECEMBER 27: Luka Doncic #77 of the Dallas Mavericks reacts after a made basket in the second half against the New York Knicks at American Airlines Center on December 27, 2022 in Dallas, Texas. NOTE TO USER: User expressly acknowledges and agrees that, by downloading and or using this photograph, User is consenting to the terms and conditions of the Getty Images License Agreement. (Photo by Tim Heitman/Getty Images)

With the incident taking place on top of the Pistons bench, a number of players on the Magic roster could be suspended for leaving their bench area to join the scuffle.

NBA rules state that during “an altercation, all players not participating in the game must remain in the immediate vicinity of their bench.

“Violators will be subject to suspension, without pay, for a minimum of one game and fined up to $50,000.”

The brawl was sparked after Wagner and Hayes chased down a loose ball in the Orlando backcourt. Wagner appeared to throw out an elbow that caused Hayes to fall into the Detroit bench.

Hayes got back to his feet and threw a punch at the back of Wagner’s head, which appeared to leave the German forward unconscious.

“He’s fine,” Franz Wagner, Moe’s younger brother, told reporters, per ESPN. “I haven’t seen the video, but I know that’s the last thing he wanted to do. 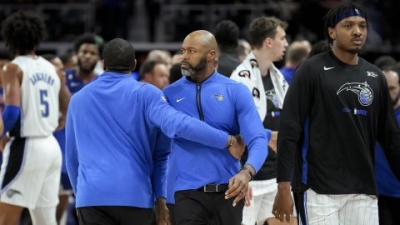 Orlando Magic head coach Jamahl Mosley is held back against the Detroit Pistons.

“We’re aware of the [leaving the bench area] rule, but things like that usually happen on the court, not on one of the benches,” he added. “Your worry is that your teammate is down there amongst the whole other team.”

The Pistons ended up beating the Magic 121-101, but Detroit head coach Dwane Casey said: “I need an explanation about the decision because my understanding is you can’t leave the bench area and escalate a situation.