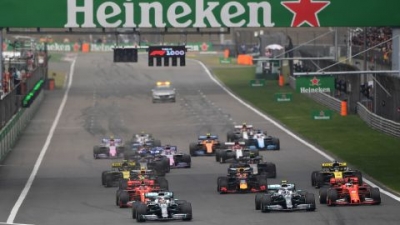 Drivers take part in the 2019 Chinese Grand Prix in Shanghai.

Formula One has canceled next year’s Chinese Grand Prix in light of Covid-19 difficulties, according to a statement released by F1 on Friday.

The race was scheduled to take place in Shanghai on April 16, marking F1’s first race in China since 2019.

But the country’s strict Covid-19 protocols have left F1 “assessing alternative options” for the fourth race of the 2023 season.

Can China's Zhou Guanyu do for F1 what Yao Ming did for basketball?

“Formula 1 can confirm, following dialogue with the promoter and relevant authorities, that the 2023 Chinese Grand Prix will not take place due to the ongoing difficulties presented by the COVID-19 situation,” the statement said, adding that an update on an alternative location would be provided “in due course.”

Over the past week, thousands of demonstrators have protested in cities across China against the country’s zero-Covid strategy.

As of Friday, thousands of buildings and residential communities across China remain under lockdown restrictions due to their classification as “high risk.”

Case numbers in the past week have hovered around record highs, with more than 34,000 new infections reported on Thursday.

This week, China’s most senior official in charge of its Covid response told health officials that the country faced a “new stage and mission” in pandemic controls, according to state media Xinhua – potentially indicating an adjustment to Beijing’s “zero-Covid” strategy.

The 2023 F1 season is scheduled to get underway in Bahrain on March 5. That kicks off a campaign featuring 24 races, assuming an alternative location is named in place of the Chinese Grand Prix.