‘The Rings of Power:’ That Ending Explained and All Your Questions Answered 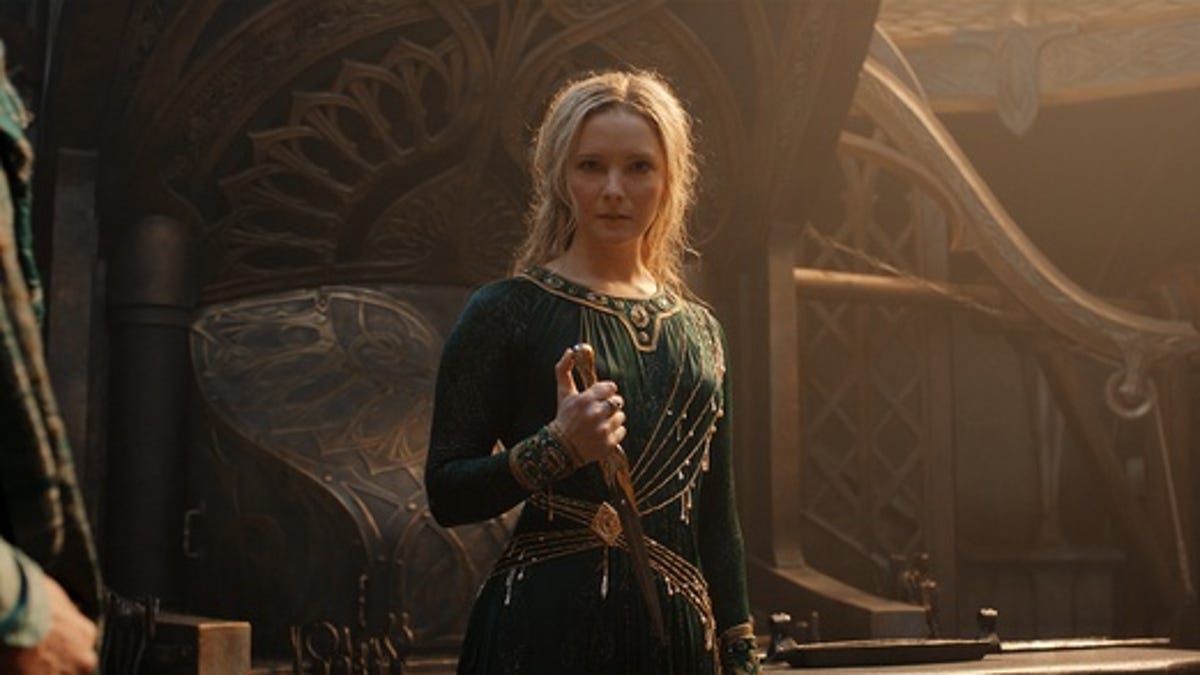 Galadriel and her dagger.
Prime Video

The first season of The Lord of the Rings: The Rings of Power is at its end. Before booting us out of Middle-earth, the Amazon prequel series provided at least a few answers to questions that had been haunting viewers all season long. One question not answered: At what point do Harfoots discover leave-in conditioner for curly hair? In any case, what follows is the final recap of the season. If you need to catch up on episode 7, you can find it here.

Otherwise, you’ve been warned: Spoilers ahead. 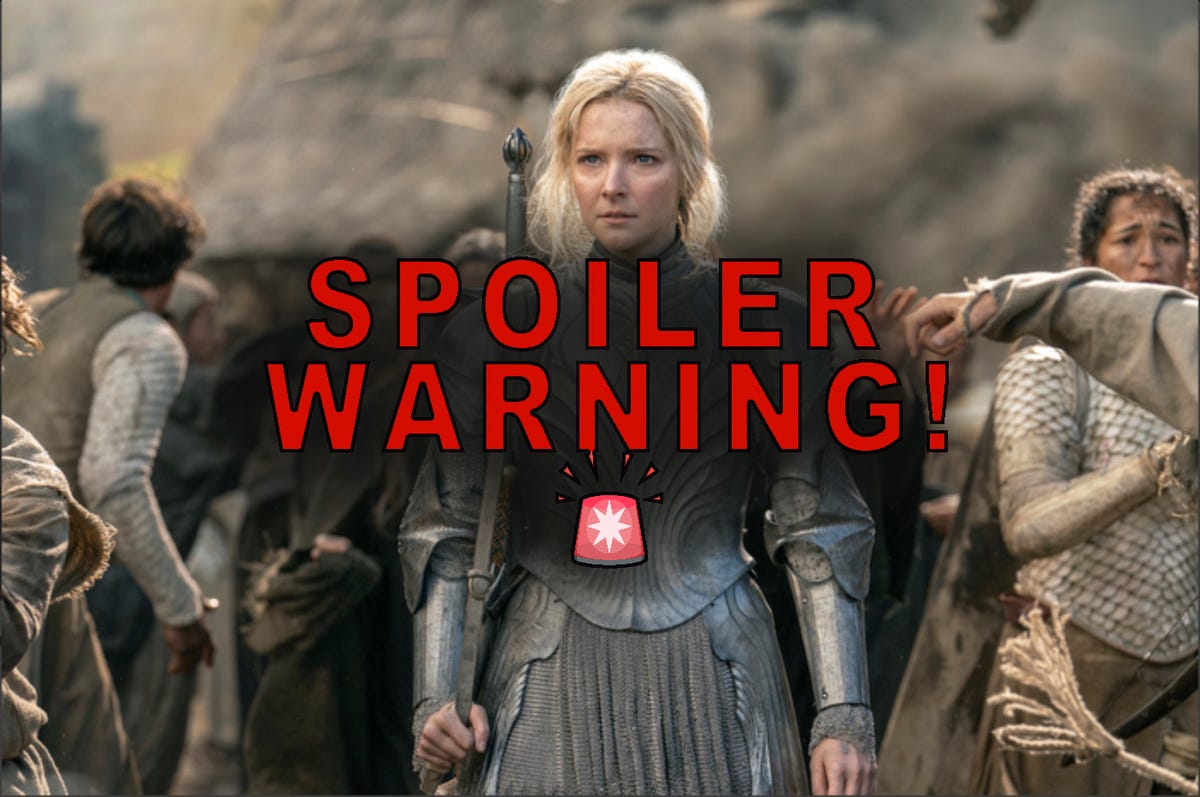 ERYN GALEN — The stranger is making his way through the woods alone. It’s rainy. He looks like he probably smells like damp wool. He’s being followed, though. There’s some other hooded thing out there. It looks like Nori but it’s actually the main one of the creeps in the white robes (they’re called the Dweller, the Nomad and the Ascetic but have no team name, which is inefficient for recappers). The others turn up and one speaks, dropping a bomb on us a whole 4 minutes in: “We serve you, Lord Sauron.”

As they kneel down, he looks a little confused. Personally, I smell a fake-out coming. So maybe don’t collect your bets just yet.

Later around a campfire, they don’t seem to have brought any marshmallows, but they’ve got this round stone thing called a hermit’s hat that will play basically no part in the what’s to come other than serving as a way to remind us of the stranger’s quest to find his stars. As they start telling him about how he’s going to rule everything, all the wind and leaves and whatnot start stirring, and honestly it’s not a good look for our pal here. One of the creeps blows magic dust in his face to  knock him out and they subsequently tie him up since he can’t control himself. Oh, and if you’re wondering where the Harfoots are, they’re watching all this from a few yards away wearing their best shrubbery.

But even the best shrubbery isn’t enough to fool the creeps. When the Harfoots try to untie him, they realize one of the creeps has shapeshifted into the stranger. What’s worse? Another one of them throws a knife and nails Sadoc right in the stomach.

Right as Nori is about to get carved up herself, the actual stranger wakes up and, to borrow a line from the closed captions, the whooshing intensifies. This part is full of surprises, including that Sadoc isn’t dead yet. Also, the creeps beat the ever living crap out of the stranger, which feels rude, considering who they think he is.

The woods are on fire — more stuff burning! Quelle surprise! — but the creeps did something magically to the stranger and now not only does he know who he is, but he can speak in full sentences. Nori is trying hard to roust him and, you know, save her friends from acquiring a nice smokey char. He snaps to, and it’s around then that the trio are like, oooooh wait, maybe he’s not Sauron after all.

And here it is folks: He’s a wizard, Harry! Bless him, the stranger proclaims, “I’m good!” (At least he didn’t say “I’m Iron Man.” That would have been a skosh derivative, no?) And then he blasts them into next Wednesday. Ideally, with no return.

Are wizards supposed to be in Middle-earth in the Second Age? Mostly no. At least, not Gandalf’s cohort of wizards. But here’s the thing: You just know someone in some conference was like “OK, we can’t make a Lord of the Rings show and not have a wizard in it.” 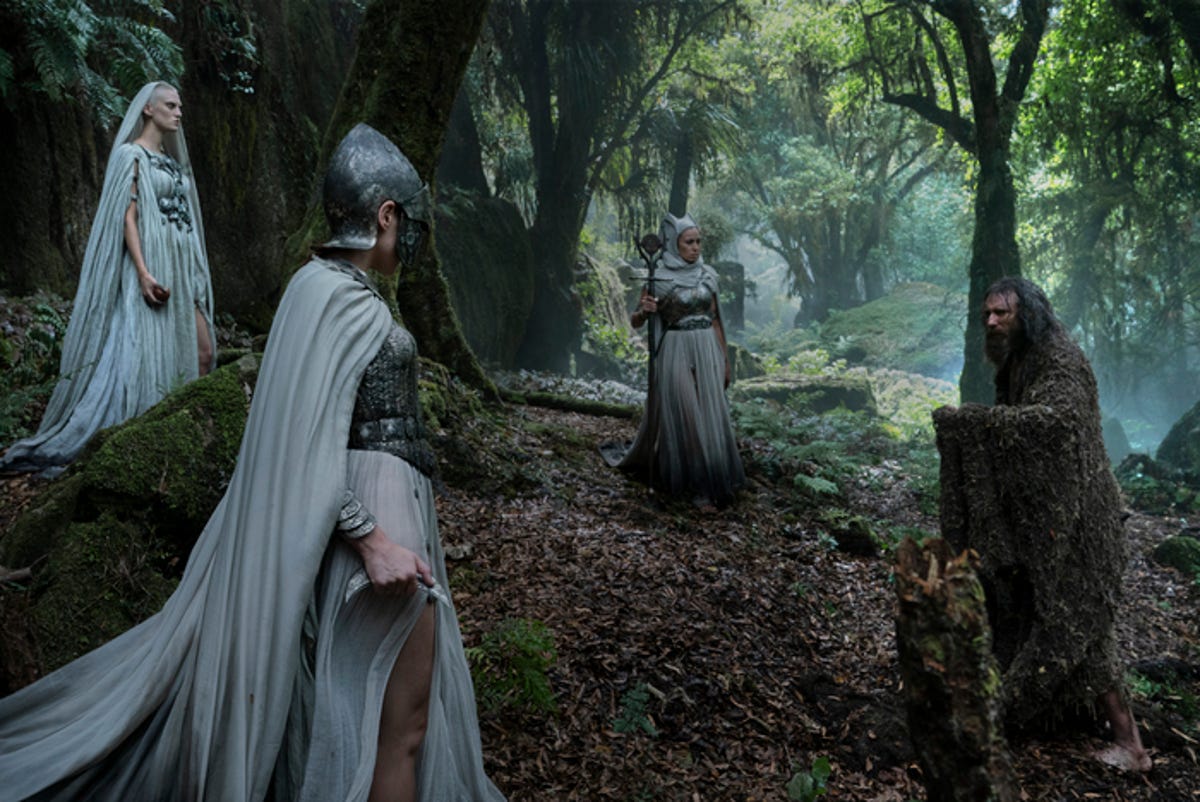 Now that all that’s settled, Sadoc’s still been stabbed — serene, but still very much stabbed. Pour one out for Lenny Henry, who won’t be collecting anymore Rings of Power checks.

Later, the stranger and Nori debrief. He tells her he’s still a little fuzzy but he’s got to go to a place the creeps mentioned, Rhûn. Nori is bummed he’s not going to stay and Harfoot around with them because, hoo boy, she’s had enough adventure to last her for a while. If a while is about 10 minutes. Her parents pack her a backpack, and after some emotional goodbyes (shoutout to Poppy for making me feel something), she and the stranger set off. But not before he decides which way to start walking by smelling the air, a thing Gandalf did in the mines of Moria. So. Add that to your evidence pile.

A bummer of a homecoming

NÚMENOR — The king is almost dead and Pharazôn is talking to a bunch of guild folks about scultping him. As one does. Among that group is Eärien, Isildur’s sister. While she’s sitting there sketching the almost-dead guy, the king wakes up and starts chattering away thinking she’s Míriel. The island will fall if the old ways are not restored. Eärien looks like she’d rather not be there. He even gets out of bed and unlocks a chamber housing one of the seeing stones — a palantir. And Eärien goes in. This decision will definitely not have negative consequences.

Elsewhere, the gang is sailing home. Míriel tells Elendil that it would be OK if he wanted to take leave since he lost Isildur and he’s basically like, nah. They’re both committed to seeing this whole mess through despite all the loss. I swear for a second I thought he was about to smell her hair, but that might be the midnight Diet Pepsi I’m drinking warping my brain.

When they get back to Númenor, all the ships in the harbor have black flags. No, Númenor hasn’t embraced piracy. The king died. Damn. This is like the second dead king in a fantasy series this week.

EREGION — Elrond and Celebrimbor chat about how High King Gil-galad is about to arrive expecting a solution to the whole elves-going-kaput thing. Apparently they have none. Embarrassing. Elrond is ready to pack it all up and leave Middle-earth. Just then, Galadriel pulls up on her horse.

Elrond apologizes to Galadriel for being an ass-hat and sending her off on the ship. She says she didn’t jump from the ship to drown, and she won’t let him drown either. When he asks what they’re going to do, she says “swim,” which is big Dory from Finding Nemo vibes.

Meanwhile, Halbrand has revived and is wandering around unsupervised. He ends up in Celebrimbor’s workshop, where the elf himself has decided to start referring to himself in third person. Always charming. They have a chat and Halbrand is putting his hands on everything and asking too many questions, but dadgummit, that rascal starts talking about alloy metals amplifying an ore’s qualities and whatnot and Celebrimbor is like, excuse me what? Clearly someone slept through chemistry class.

When Gil-galad arrivies, Elrond, Celebrimbor and Galadriel talk to him about this wild idea with that small chunk of mithril they still have. Maybe they could make an item that would do the amplifying. Something circular. Celebrimbor suggests a crown, and Gil-galad looks like he likes the sound of a new accessory for a hot second. But really, he’s super skeptical about placing all that power on one person. Literally. In any case, Gil-galad thinks it’s too late. He’s also a bit incredulous that the idea came from the lowly Southlander, which feels a little classist, but hey. My guy is casually wearing gold laurels.

In trying to convince Gil-galad, Celebrimbor starts saying something about the power of the unseen world and power over flesh and immediately Galadriel’s internal alarm bells start going off. He acts like a complete sketchball when she asks him where he got that phrasing from. She’ll probably let it go, right? 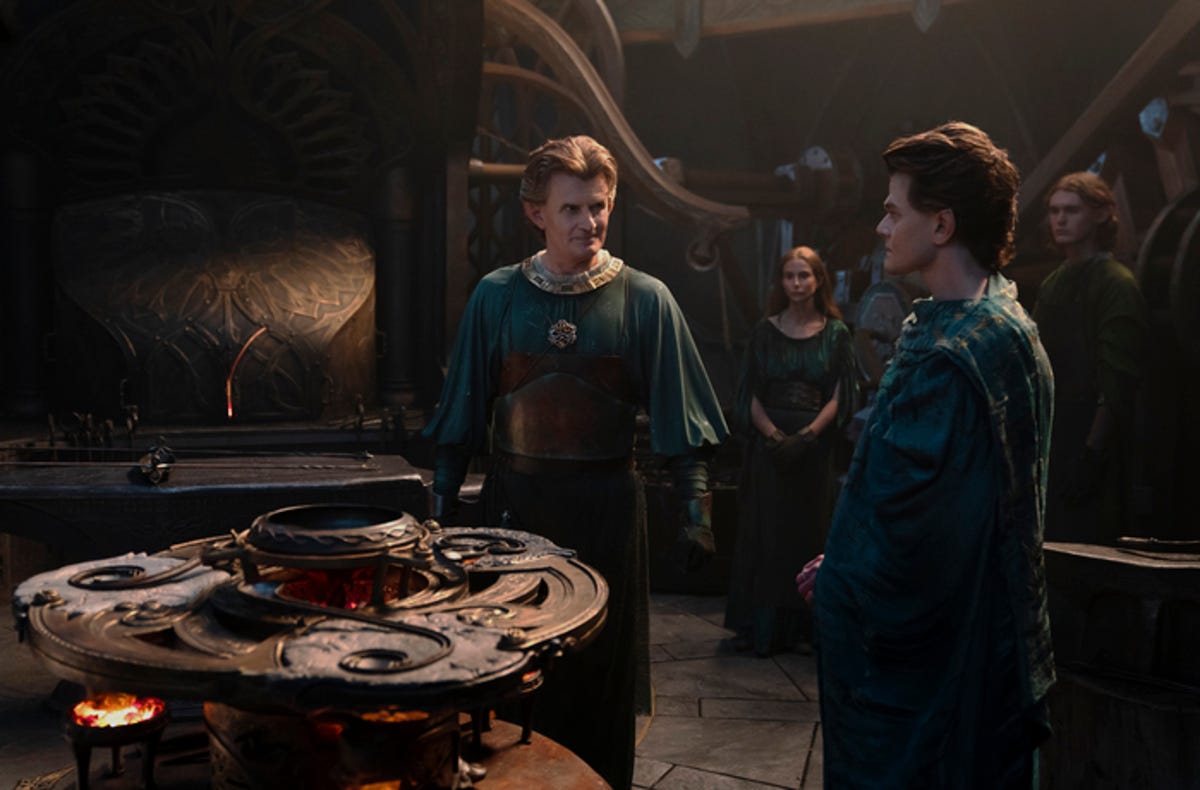 Arts and crafts with Celebrimbor.

Elrond won’t let the alloy idea go and does manage to convince Gil-galad to give them three more months to work on the project. As Halbrand and Celebrimbor start collaborating, Galadriel observes, and also puts in a request for Halbrand’s 23andMe. Meanwhile, he’s trying to play innocent with Galadriel. Gollygosh, I can’t believe I’m here, oh shucks.

So, Galadriel gets the report back about Halbrand’s ancestry. But before the audience is in on it, Halbrand turns up all stoked because they’re not just going to make one thing, they’re going to make two things — and they’ll be smaller than a crown.

You see where this is going, right?

She’s like, look, you need to tell me what your game is, dude.

Turns out, there’s no king of the Southlands. The last guy to bear that crest died more than a thousand years ago. And this is exactly why my old journalism professor used to tell us, if your mother tells you she loves you, double confirm it.

“I have been awake since before the breaking of the first silence,” Halbrand says. Morning people always have to rub it in your face.

As she tries to stab him with her brother’s dagger, she falls into some weird daydream (Halbrand is in her head) where she’s back in Valinor with big bro Finrod. Of course this fake Finrod is all pro-Sauron. We all have that relative.

Then boom! She’s on the raft with Halbrand. He’s being super manipulative. He starts tempting her, offering to make her a queen — it’s definitely a call back (forward?) to when Frodo offers her the ring in The Fellowship of the Ring. He offers that together they can save Middle-earth. She asks if he means save or rule and he’s very much like, ¿por qué no los dos?

She’s not taking the bait, though, and he quickly turns into that nice guy from Tinder who tells you you’re ugly when you decline a second date.

Anyway, she comes to and Elrond is like R U OK. She goes running off to the workshop to find Celebrimbor. Halbrand’s taken off. She won’t tell them exactly what happened, but she tells them they have to make three of the, ahem, “things” for balance. (You know we’re talking about the rings, yes?) She donates her dagger to the forging. The drama is undercut by my cat noisily climbing into a tote bag in the background. 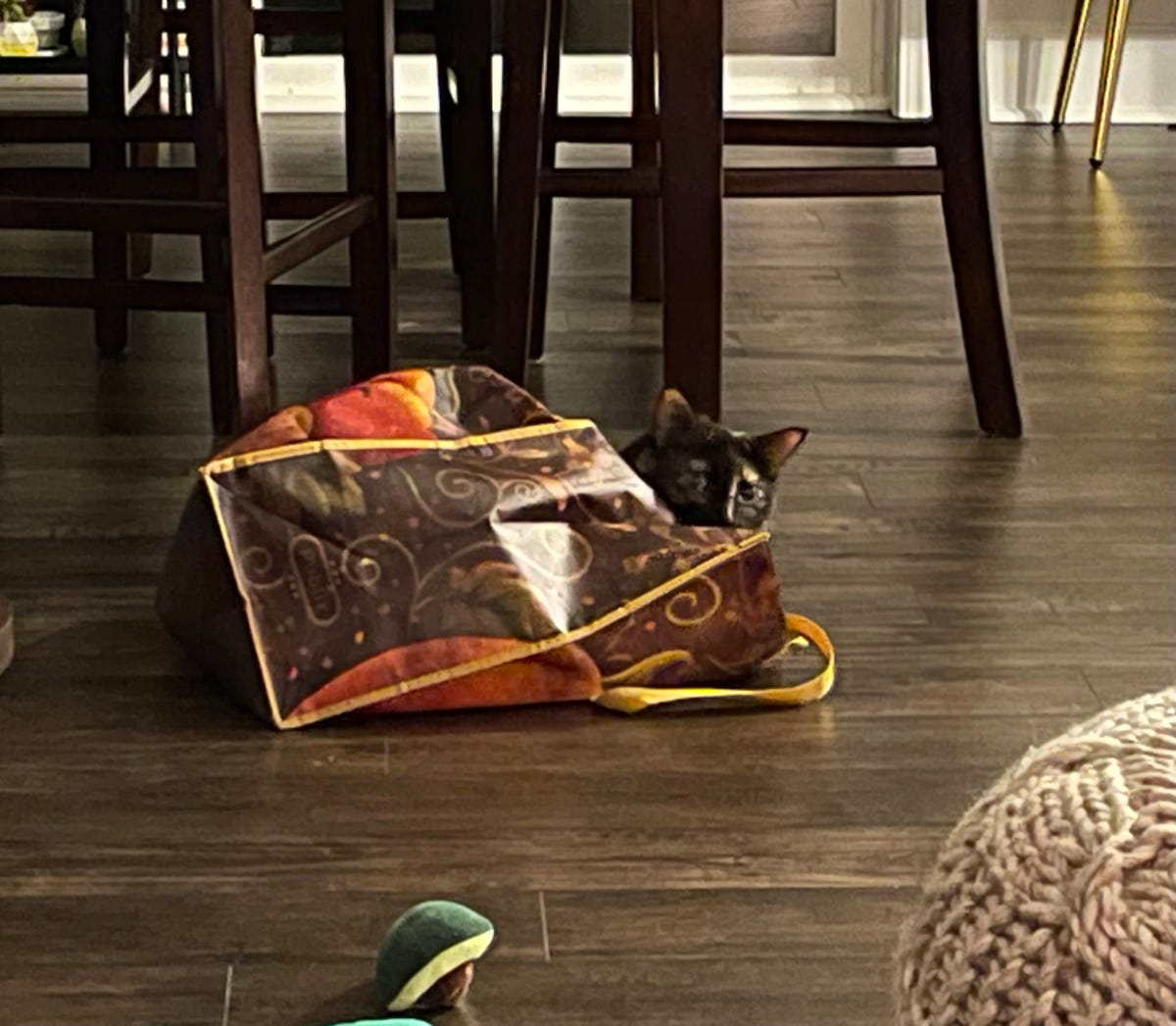 The real villain of the Rings of Power finale.

As Elrond drops the mithril chunk into the hot metal, it sure looks a lot like the eye of Sauron for a second. Seems inauspicious. Later, Elrond is pacing around like the leftover takeout didn’t quite settle with him. He goes to where he’d found Galadriel and retrieves the scroll, which of course reveals what Galadriel probably should have mentioned earlier. But the rings are done and everyone sure seems to think they’re purdy.

Back in Mordor, we get a closeup shot of Halbrand’s — or should I say Sauron’s — eye. He’s standing looking out at Mount Doom and he seems to know about the rings. And he is smug as hell.