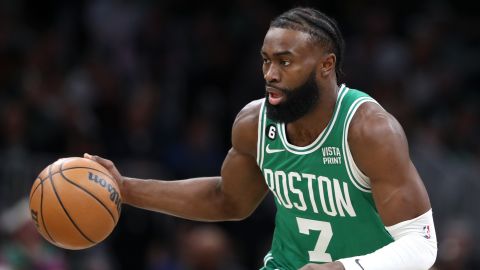 Jaylen Brown dribbles against the New Orleans Pelicans during the first half.

The Boston Celtics became the first team in the NBA this season to reach 30 wins after beating the New Orleans Pelicans 125-114 at TD Garden in Boston on Wednesday night, largely behind a combined 72 points from the team’s stars, Jayson Tatum and Jaylen Brown.

Brown scored season-high 41 points and had 12 rebounds while Tatum had 31 points and 10 rebounds as the Celtics won their fourth straight game.

Brown specifically attacked the Pelicans from the mid range, crediting extra muscle added in the offseason for allowing him to handle contact with bigger opponents, as he makes a concerted effort to not settle for attempts from deep.

“I think I can get to the rim at a good rate this year,” Brown told reporters afterwards, per the Celtics website. “I definitely want to keep that up.

“I don’t want to let the defense off the hook, but I feel good about a lot of the shots I took from three. Some of them went down, some of them haven’t. But I definitely still think I’m going to look to get to the basket a lot more for sure just for the remainder of the year.”

Celtics forward Al Horford reiterated the point: “When (Brown) drives, I feel like people feel it.

“When he’s hitting you when he’s driving, that’s real. So it’s good to see him play at that level and have his mind made up that he’s going to attack the paint.”

It was Brown’s sixth 40-point game of his career, moving him past Sam Jones and Isaiah Thomas for the sixth-most in Celtics history.

Together with Tatum, the two wing players have become the driving force behind Boston’s recent success.

The team reached the NBA Finals last season, eventually losing to the Golden State Warriors, and is again one of the best in the league this year. 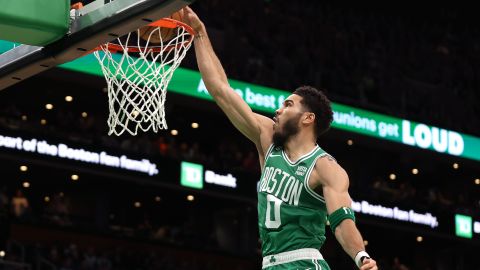 Tatum dunks against the Pelicans.

In both scoring at least 30 points and 10 rebounds in the same game, Brown and Tatum became the first Celtics players to achieve that stat line since Paul Pierce and Antoine Walker in 2001.

“They continue to grow in front of our eyes,” Horford said of the star duo after the victory. “They feed off each other, and that’s what really drives our team.”