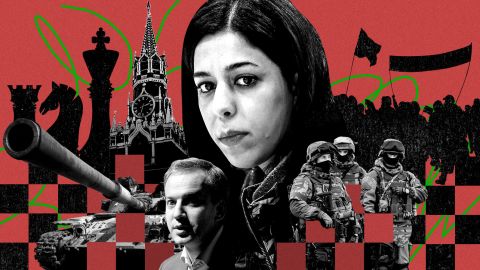 Shohreh Bayat says she did not break any rules with her choice of clothing.

Three years after fleeing Iran, chess referee Shohreh Bayat fears being further ostracized after challenging the game’s governing body and its president, Russia’s former deputy prime minister, over her choice of clothing at a tournament in October.

Back in 2020, Bayat was criticized in Iran for not wearing the appropriate headscarf at the Women’s World Chess Championship in China and Russia. She refused to bow to the regime’s pressure but, as a result, has not returned home out of fear of punishment.

Now, three years on, Bayat has raised the hackles of the International Chess Federation (FIDE) and its president for wearing clothes in support of the Iranian protests and the people of Ukraine.

The 35-year-old Bayat, who now lives in London with her husband, recently officiated at the 2022 Fischer Random World Chess Championship in Reykjavik, Iceland, in October.

The tournament was another opportunity for Bayat to officiate some of the sport’s biggest stars, though it came at a difficult time as protests spread across her home country of Iran after the death of Mahsa Amini.

The 22-year-old Kurdish-Iranian woman died in mid-September after being detained by the country’s morality police, allegedly for not abiding by the country’s conservative dress code, sparking outrage around a range of grievances with the regime.

“It reminded me of my own story,” Bayat told CNN. “So I decided to stand up for women’s rights in Iran. During the tournament I wore a t-shirt with the motto of Iranian people ‘WomanLifeFreedom’ and I wanted to stand with them.”

Shohreh Bayat, chief arbiter for the match between Aleksandra Goryachkina of Russia and Ju Wenjun of China, looks on during the match at the 2020 International Chess Federation (FIDE) Women’s World Chess Championship in Shanghai on January 11, 2020. (Photo by STR / AFP) / China OUT / TO GO WITH AFP STORY BY PETER STEBBINGS (Photo by STR/AFP via Getty Images)

Bayat said that after the first day of wearing the t-shirt, a FIDE official asked her, unofficially, to not wear it.

In a statement sent to CNN, FIDE said that “arbiters at top events are required to dress in due decor and discretion” and that Bayat “disregarded direct instructions given to her to stop wearing slogans or mottos.”

According to Bayat, such regulations are not found in FIDE’s arbiter handbook and she says no dress code was given for the event in Iceland.

The arbiter’s handbook does say officials must “follow the dress code” and that they must be “dressed properly, helping to improve the image of chess as a sport.” CNN has reached out to FIDE to clarify the dress code that was expected for the October event.

Frustrated by the request to stop wearing the slogan, Bayat said she decided she was not breaking any rules so she wore it again the next day.

Bayat says she was once again asked by an official to take it off, only this time she was told the request came from FIDE President Arkady Dvorkovich, who previously served as Russia’s deputy prime minister and who attended the tournament in Iceland. 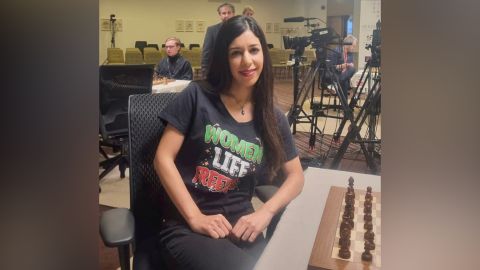 Bayat wearing the t-shirt during the tournament in October.

Bayat said Dvorkovich never spoke to her in person about the t-shirt, despite being in the same room as her when she wore it.

Dvorkovich, however, messaged her on WhatsApp – messages seen by CNN – to request Bayat not use official FIDE events for “political purposes.”

Angered by Dvorkovich’s request, Bayat says she quickly responded but then deleted her “emotional” reply.

Bayat then informed Dvorkovich she would not wear the t-shirt the next day, though she wanted to do the “right thing.”

Given that FIDE’s charter states that it is “committed to respecting all internationally recognized human rights and shall strive to promote the protection of these rights,” Bayat said she decided she had not violated any rule.

“I thought carefully, and I realized that it is not me that was making chess political but Arkady,” Bayat said.

“I was following FIDE rules, but Arkady was breaking them by forbidding me to stand up for women’s rights in Iran.”

FIDE refuted any notion that politics played a part in Dvorkovich’s request to Bayat.

“We were not judging her views or her activism, but the platform and moment she chose for it,” FIDE told CNN.

The following day, Bayat, who has not seen her parents since leaving Iran over three years ago, said she bought a blue and yellow outfit and wore it in support of the Ukrainian people fighting against the Russian invasion, and also in memory of the 176 people that were killed when Iran said it unintentionally shot down a Ukrainian plane that crashed near Tehran in 2020. 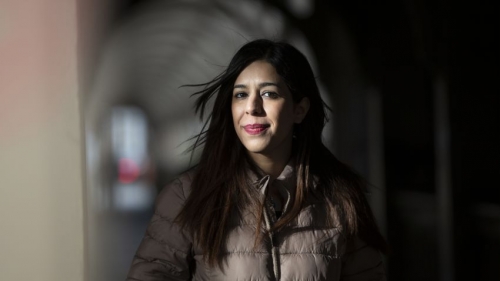 She says nothing was said to her about the blue and yellow outfit but, since leaving the tournament in Iceland, Bayat told CNN that she hasn’t been invited to another FIDE event, despite the organization recognizing her as the best female arbiter in Europe in 2022.

Bayat said she was initially removed from the arbiter commission – a registry of all qualified arbiters – and, in a message seen by CNN, a top FIDE official told her it was because of her outfits in Iceland.

Her name is currently listed on the database and FIDE told CNN that Bayat was still very much in contention to officiate future events but that it has “more International Arbiters than world events, so we need to establish some rotation.”

FIDE President Dvorkovich was first elected in 2018 and was re-elected for a second term in August. Previously, the 50-year-old served as Russia’s Deputy Prime Minister between 2012-2018 following a stint as the Kremlin’s top economic adviser.

The Kremlin welcomed Dvorkovich being reelected as FIDE president last year, but he has always maintained his proximity to the Kremlin would not impact his work for FIDE and noted that he was one of the most senior establishment figures in Russia to question the war in Ukraine.

However, Bayat told CNN she believes Dvorkovich is not accepting criticism of Iran due to Russia’s links with the country – Iran continues to support Russia with military aid for the war in Ukraine.

She notes FIDE’s handling of the Iranian Chess Federation as further evidence of this.

Dvorkovich wrote a letter urging Iran to comply with FIDE’s regulations in 2020 after it allegedly told its players to not play against Israeli opponents.

The acting president of Iran’s Chess Federation responded, saying that Iran has constantly been in compliance with FIDE’s rules and statutes, and that the athletes themselves decide in which events to participate.

Iranian chess player Sara Khadem competes, without wearing a hijab, in FIDE World Rapid and Blitz Chess Championships in Almaty, Kazakhstan December 26, 2022, in this picture obtained by Reuters on December 27, 2022. Lennart Ootes/FIDE/via REUTERS THIS IMAGE HAS BEEN SUPPLIED BY A THIRD PARTY. MANDATORY CREDIT. NO RESALES. NO ARCHIVES.

Despite being given a warning, Iranian players are still forfeiting games and FIDE has not yet taken concrete action.

“I find it extremely ironic that FIDE finds my human rights t-shirt political, but when the Iran Chess Federation repeatedly forces its players not to play against Israel, FIDE is silent and turns a blind eye to that,” Bayat said.

Asked by CNN whether it was confident Dvorkovich was working without pressure from Russian authorities in regards to Bayat’s support of the Iranian protests, FIDE said it had total and absolute faith in him.

“While we respect Ms. Bayat’s political stance and activities, any FIDE officials need to follow political neutrality while on duty, and of all the official positions one can hold, that of an arbiter is the one that demands higher standards of integrity, neutrality, and discretion,” FIDE said in a statement to CNN.

“No matter how noble or uncontroversial the cause is, doing activism from that role is inappropriate and unprofessional. She was indeed asked not to wear any slogans while acting as an arbiter and explained the reasons why.”

Bayat’s activism has attracted the attention of the biggest names in the sport after the Iranian chess referee tweeted about the incident again on Sunday.

US grandmaster Hikaru Nakamura recently tweeted “#WomenLifeFreedom #IStandWithUkraine” in response to a message about Bayat’s tweet.

Meanwhile, chess superstar Magnus Carlsen’s coach Peter Heine Nielsen tweeted: “The chess world needs to make up its mind. On which side do we actually stand?”

Bayat, who now also works in primary schools teaching chess, said the support she’s received has been “heartwarming,” as it was when she first sought asylum in England back in 2020.

“I was initially trying to support Iranian women. I think that’s important and it’s very nice to see other people are supporting me for doing the right thing,” she said.