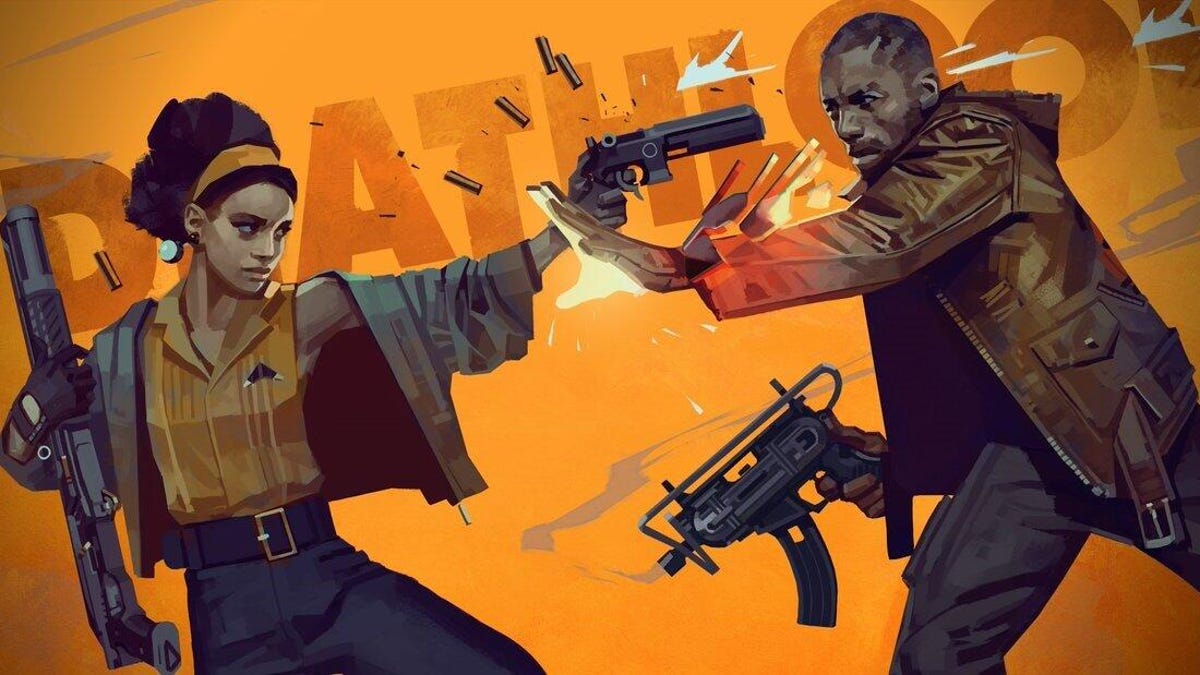 Deathloop is one of the best games on the PS5 so far.
Bethesda

The PlayStation 5 turned two years old in November and, thankfully, Sony’s flagship gaming console is finally getting easier to find. Supply chain issues and pandemic-related production hiccups meant that for the longest time, finding a PS5 console, any PS5 console, required timing, precision and a whole lot of luck. Now that getting your hands on one of these beasts is achievable, the focus can go to where it should have been this whole time — the games you can play on it.

The PS5 launched with a decent-but-modest set of titles, including Spider-Man: Miles Morales and Demon’s Souls, but its library has been slowly but surely been by more original, cutting-edge games. Some are exclusive to the console, while the PS5 shares some of its greatest hits with the PS4 and Xbox X|S. The latest addition is God of War: Ragnarok, which launched in November. Though not quite as memorable as its predecessor, it’s a must-play for PS5 owners.

Not all of the PlayStation 5 games on this list are for everyone, but there’s absolutely something here for gamers of all tastes. 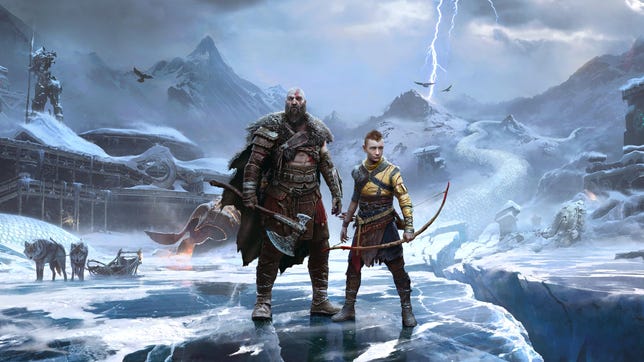 Kratos has performed many Herculean tasks in his day — quite literally — but living up to the hype that accompanied God of War: Ragnarok may have been his hardest quest yet. Alas, the taciturn man from Sparta has done it again. While not a perfect game, God of War: Ragnarok is a worthy follow up to its stellar predecessor and easily one of 2022’s most satisfying games. 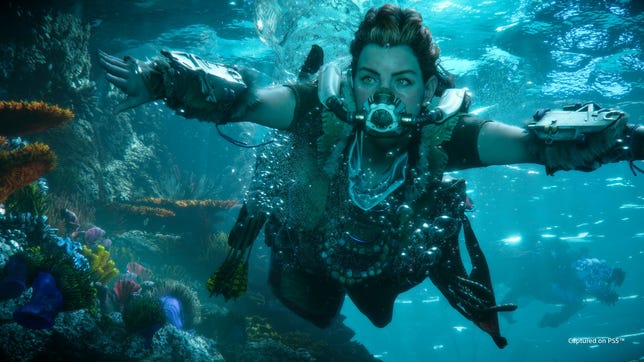 Guerilla Games might have a cursed release scheduled. Horizon Zero Dawn was great, but quickly outshined by The Legend of Zelda: Breath of the Wild, one of the best games ever. When Horizon Forbidden West came out, it was followed a week later by Elden Ring, which sucked up all of the gaming world’s oxygen for at least a month.

But don’t count Aloy out. Her second adventure is visually stunning, and continues to explore the compelling world created by the first game (even if some of the characters still feel like cardboard cutouts).

The gameplay introduces a new Pullcaster hook that opens up new forms of platforming, as well as the dynamic of several underwater levels. It’s also got new weapons and gnarly new machines to destroy. Give Aloy a chance. 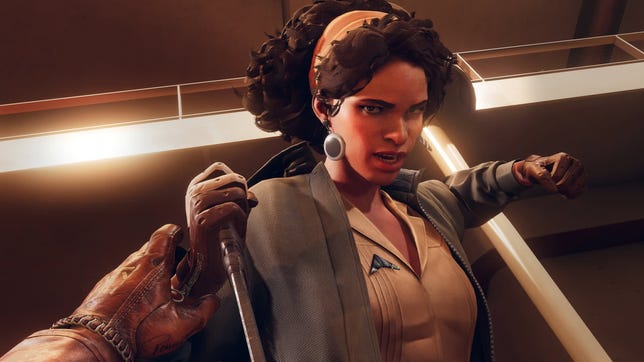 Arkane Studios’ Deathloop injects the thrilling open-ended, action-stealth gameplay from the Dishonored series into the framework of a time loop, offering up 2021’s most inventive first-person action game. Getting to explore Blackreef Isle as the cunning and equally hilarious Colt showcases Deathloop’s deft handling of comedy and oddball, ultra-violence.

Many of the encounters you’ll have will leave you impressed by how far you can push the intricate design of its clockwork world to assassinate key targets and break the infinite loop. But when you add in another player who can invade your game as Colt’s former-lover turned rival Julianna, Blackreef Isle becomes an impromptu multiplayer arena that sees one player hunting the other. Deathloop is a must-own PS5 game. 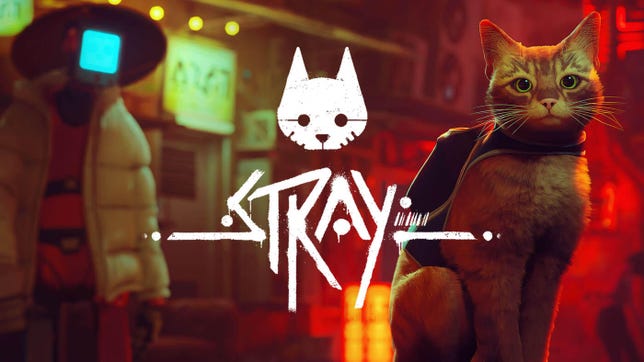 In 2019, Untitled Goose Game showed how fun it could be wrecking havoc as a rogue avian. In 2022, developers BlueTwelve Studio allow players to inhabit the body of a stray cat on a quest to return home. In Stray, you control a cat that’s found itself in a futuristic, neon-soaked city populated by robots — and a few carniverous aliens.

“It’s rare for a game to offer a wholly new perspective for how we can experience a familiar setting, and rarer still for one to so confidently have all of its mechanics designed around it,” GameSpot’s Alessandro Barbosa wrote in his review of the game, in which he awarded Stray a 9/10 score. “It’s a consistently satisfying adventure with a charming story about companionship that rarely misses a beat across its well-paced runtime. 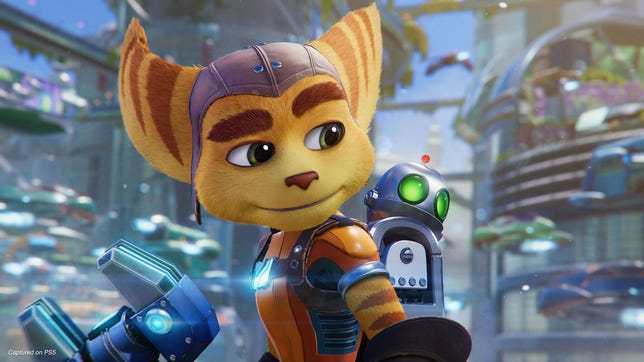 The Ratchet & Clank series is synonymous with the PlayStation brand and, even after nearly 20 years of games, Rift Apart stands as one of the best entries in the series.

Rift Apart leans heavily into the series’ tested formula of action platforming with a hefty dose of over-the-top weaponry, but the latest game features one of the strongest stories the franchise has seen yet, giving longtime fans and newcomers alike a compelling plot to follow.

Ratchet & Clank: Rift Apart is an excellent showpiece for what the PS5 can do, with levels shaped around the console’s superfast harddrive, and has left us more excited about the future of the series. 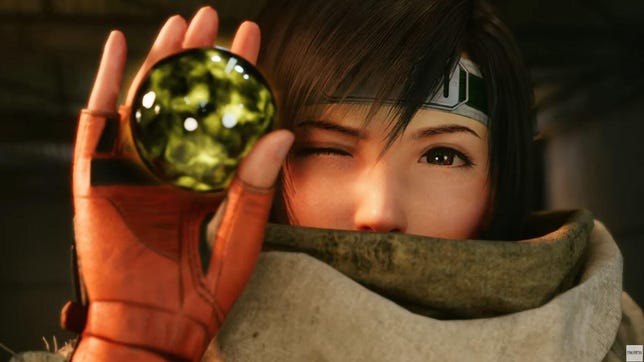 2020’s Final Fantasy VII Remake almost seemed too good to be true. Getting to revisit the world of Final Fantasy VII and see the classic party of heroes in a new and visually stunning light was a surreal, thrilling experience. It managed to surpass its moniker of being just another remake, and it was indeed one of the year’s best role-playing games. However, the catch was that it is only one part of a larger story, and we’ve got to wait some time till we even get a glimpse of the next installment.

Still, Intergrade on PS5 served as a great way to hold players over till then. Along with an impressive visual and gameplay upgrade for FFVII Remake, Intergrade also added a new PS5 exclusive story expansion focusing on FFVII’s quirky ninja, Yuffie, and her journey into Midgar. If you own a PS5 and still haven’t gotten a chance to experience Final Fantasy VII Remake, then do check out Intergrade. 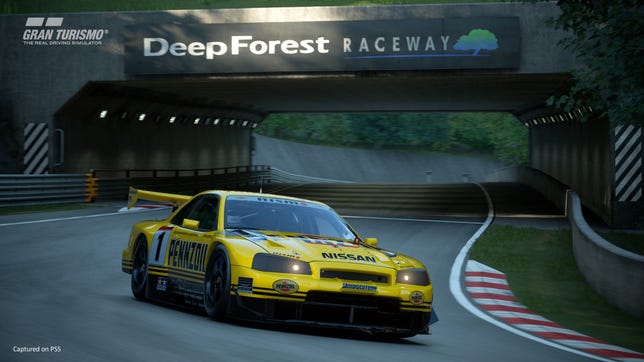 No PlayStation generation is complete without a Gran Turismo game. While Xbox owners have rightly boasted of their access to the terrific Forza franchise, it’s been nine long years since Gran Turismo 6 launched on the PS4.

Gran Turismo 7 to the rescue. It’s exactly what fans of the franchise would come to expect: A precise driving simulator that looks drop-dead gorgeous. The game has amassed some criticism for its use of microtransactions, but if you’re a racing fan that can overlook some microtransaction malarkey, Gran Turismo is a no-brainer. 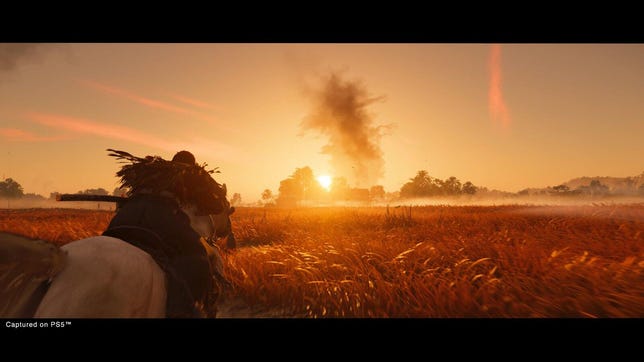 Another revisit to a PS4 game is the director’s cut for Ghost of Tsushima, an open-world samurai action game coming from the creators of the Infamous series. What makes the PS5 edition a clear upgrade over the original is that on top of having the Iki Island expansion, which adds more than 5 hours of new story content, it also gave the base game a substantial performance upgrade. 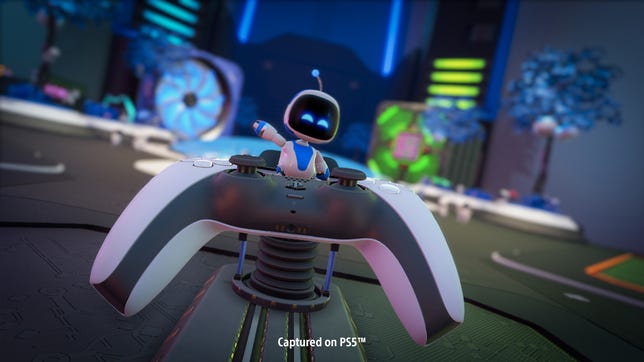 Astro’s Playroom makes no attempt to hide the fact that it’s an excuse to show you what a gamepad can do. But it conjures a world that you’ll want to see and explore, as GameSpot’s Mike Epstein wrote upon its release. 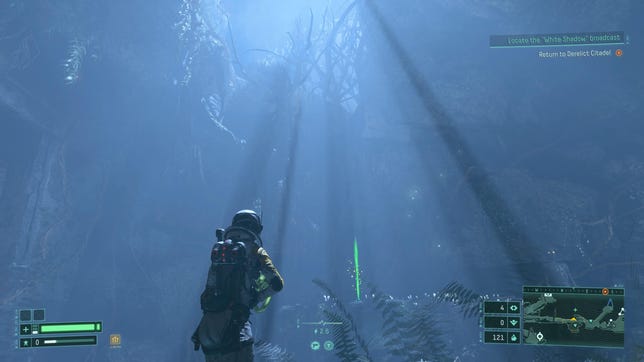 The past few years have seen an unusual amount of games set within a time loop, and the PS5 exclusive Returnal stands as one of the strangest.

Blending fast-paced third-person action gameplay with the unpredictability of a randomized role-playing game, Returnal has its protagonist Selene trek through an alien planet filled with hostile creatures and enigmatic artifacts detailing a cataclysmic event — and it somehow all connects to her. Its plot feels like a carefully calculated mix of films like Prometheus and Edge of Tomorrow, yet Returnal’s story and presentation give it a flavor all its own.

Running and gunning through Returnal’s many ruins with bizarre alien weapons offers some of the most satisfying and thrilling shooters of the year, enticing you to get in just one more loop through the planet. 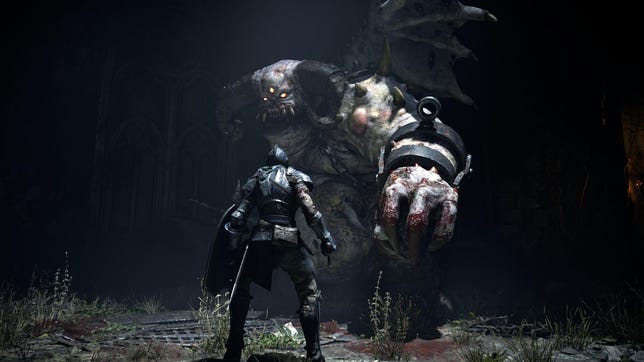 One of the more conspicuous trends of the past 10 years has been the rise of the super hard game. A lot of that is chalked up to the success of Dark Souls, by FromSoftware, which hit the PlayStation 3 and Xbox 360 in 2011. But Dark Souls itself was a spiritual successor to Demon’s Souls, a highly regarded game by FromSoftware that launched in 2009.

And now Demon’s Souls has a second life on the PlayStation 5, as it’s arguably the best game on the platform. It has a 92 rating on Metacritic, and got a 9 out of 10 from GameSpot. It’s been credited for faithfully remaking the 2009 classic but improving it with better movement, and modernizing it with graphics that show off what the PS5 can do. 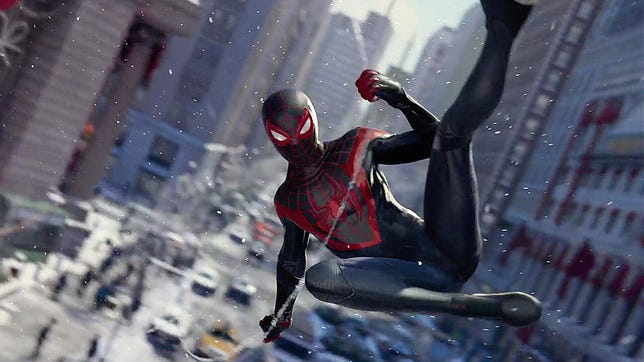 In Spider-Man: Miles Morales, an expansion to 2017’s Spider-Man, you can wear a backpack in which a small cat donning a Spider-Man mask pops out and attacks your enemies.

We don’t think we need to expand any further. 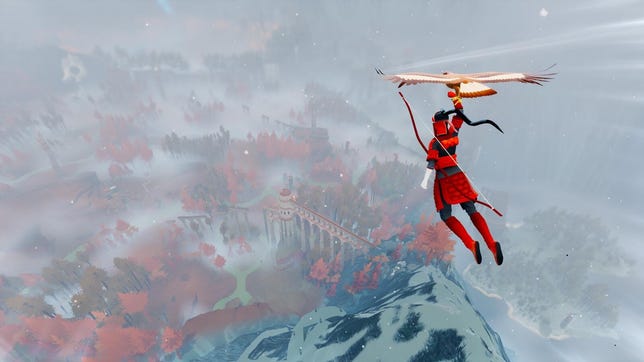 A third-person action game concerned almost primarily with flow and movement, The Pathless is a pleasure to play every single second you have the controller in your hand.

It’s available on other platforms, including the iPad, but I’d argue it’s best played on a current gen console like the PS5, where the visuals and frame rate reflect the slickness of the game’s design.

You can read our full review here. 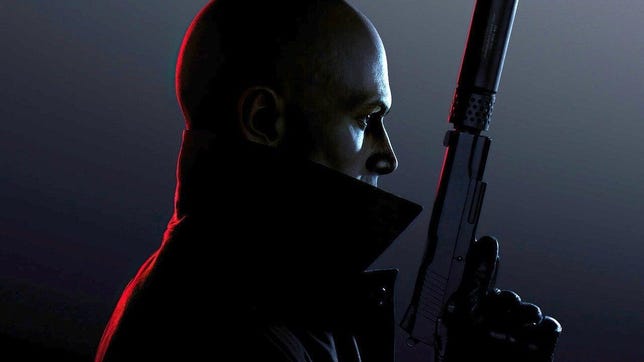 Hitman 3 wraps up the rebooted Hitman trilogy, which began with the eponymous 2016 title, and does it with a bang. Hitman 3 received a 9/10 from CNET sister-site GameSpot thanks to its excellent level design, improved story and its replayability. That last attribute is the key. Hitman may be about assassinations, but it’s more of a puzzle game than an action game, and you’ll have to play each level over and over to see all of the creative ways Agent 47 can dispense with bad guys.

The game is available on both the PS4 and PS5, among other consoles, but the PS5 version has 4K, 60-frames-per-second gameplay and improved haptic feedback thanks to the DualSense controller. 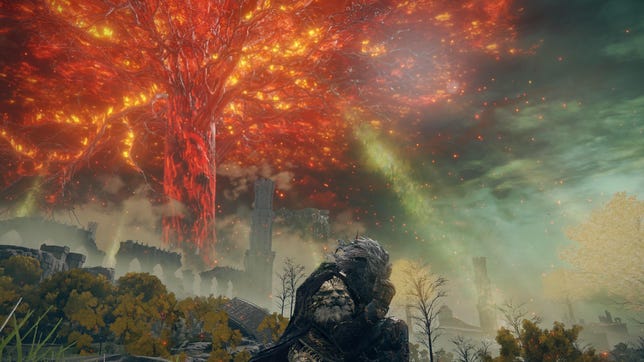 This is a bit of a “duh” inclusion, but we can’t not include Elden Ring. It’s among the most ambitious RPG games ever made, and probably has the most immersive world of any game that doesn’t have “Breath of the Wild” in the title.

To be sure, Elden Ring isn’t for everyone. It’s really hard and it’s really long. But if you’ve got 100 hours to invest, either over a few weeks or a few months, it’ll give you one of the best gaming experiences you can have on any console right now.