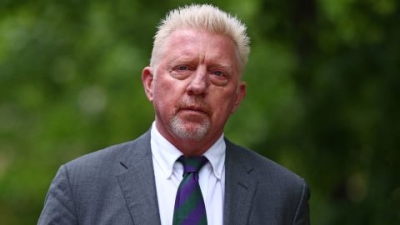 Former world No. 1 men’s tennis player Boris Becker has left for Germany after serving just eight months of his sentence in the UK, his lawyer said on Thursday, after UK media reported he had been released from custody and was due to be deported.

Becker “has served his sentence and is not subject to any penal restrictions in Germany,” his lawyer, Christian-Oliver Moser, said in a statement. Moser did not provide any further details about Becker’s location in Germany and said that any requests for interviews “will not be answered.”

Becker was released from a UK prison after serving just eight months of his sentence and had been due to be deported from the UK, PA Media reported on Thursday.

“Any foreign national who is convicted of a crime and given a prison sentence is considered for deportation at the earliest opportunity,” the Home Office said in a statement, according to Reuters, while declining to comment directly on Becker’s case.

Boris Becker, originally from Germany, has lived in London since 2012 but does not have British citizenship.

In April, Becker was found guilty of four charges relating to his 2017 bankruptcy case under the Insolvency Act and was sentenced by Judge Deborah Taylor at Southwark Crown Court to two-and-a-half-years. He was originally due to serve half his sentence in jail.

Taylor accused the six-time grand slam champion of “playing the system with bad faith” by concealing and transferring assets, and had deprived creditors of more than £2 million ($2.51 million) in assets.

Becker previously denied all the charges, saying he had cooperated with bankruptcy proceedings, according to Reuters.

CNN has reached out to the UK’s Ministry of Justice for a statement.

Becker made tennis history when he won Wimbledon aged 17 in 1985 and went on to win five more grand slam titles over the next 11 years.

He has remained active in the tennis world since retiring from the sport, notably as the coach of Novak Djokovic and through frequent media appearances as a commentator and pundit.