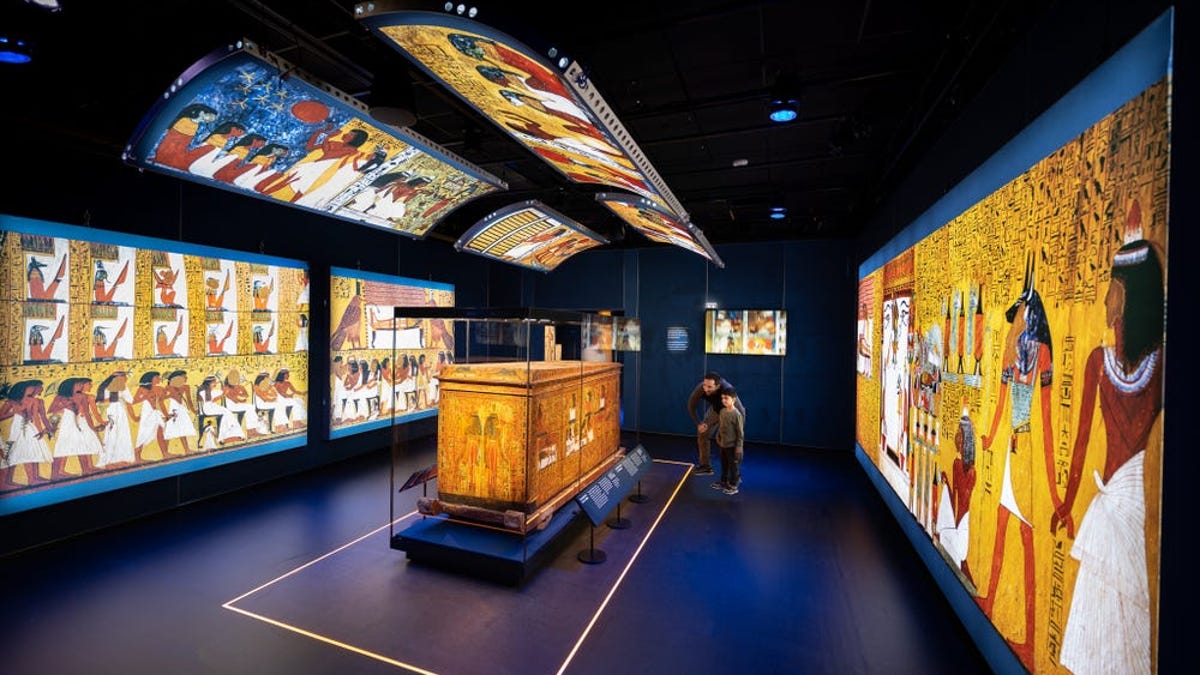 Visitors to San Francisco’s de Young Museum will see detailed scenes on the side of an Egyptian coffin as theatrically lit photo murals projected on giant displays. The exhibit’s on display through Feb. 12.
World Heritage Exhibitions

Last fall, I traveled to ancient Egypt. It was an easy trip — no COVID tests, airport security lines or weather delays. I just climbed into a cinematic motion chair, strapped on a high-resolution VR headset and got swept into Queen Nefertari’s lavish tomb, a labyrinth of chambers covered in vivid floor-to-ceiling paintings depicting the queen’s life and times.

A loquacious apparition of Nefertari herself, floating in midair and draped in a diaphanous blue gown, pointed out notable sights with a graceful sweep of her digital arms.

Queen Nefertari takes VR visitors through the elaborate tomb in Egypt’s Valley of the Queens built for her by her husband, Ramses II.

The absorbing virtual-reality experience is part of Ramses the Great and the Gold of the Pharaohs, a dazzling, tech-heavy exhibit at San Francisco’s de Young Museum that illuminates the life and achievements of Ramses II. More than 3,300 years ago, the celebrated pharaoh ruled Egypt for 67 years during an era of great prosperity and empire for the country, and the exhibit has the epic Ramses II-era royal statues and gold burial masks to prove it.

“The temples he erected, statues he commissioned, monuments he inscribed throughout Egypt and Nubia, and funerary temple and royal tomb he built were reminders of his earthly power and closeness to the gods,” Renée Dreyfus, George and Judy Marcus Distinguished Curator in Charge of Ancient Art at the Fine Arts Museums of San Francisco, said in a statement. “The proliferation of his name led to it becoming almost a synonym for kingship.”

The traveling show was curated by archaeologist Zahi Hawass, Egypt’s former minister of antiquities, and runs at the de Young through Feb. 12 before continuing to Paris. It assembles more than 180 remarkably preserved ancient treasures from the time of Ramses II, as well as from hundreds of years before and after him: sarcophagi, ornate tomb relics, beaded jewelry, a mongoose and cats, mummified and likely presented as an offering to the gods. Some of the objects have never before left Egypt.

The exhibit also boasts its share of 21st-century flourishes to make 19th Dynasty details more tangible and accessible. Drone photography, for example, contributes imagery to a dynamic multimedia re-creation of one of Ramses the Great’s biggest military victories, the Battle of Kadesh of 1275 BCE against the Hittite army of what’s now Turkey. 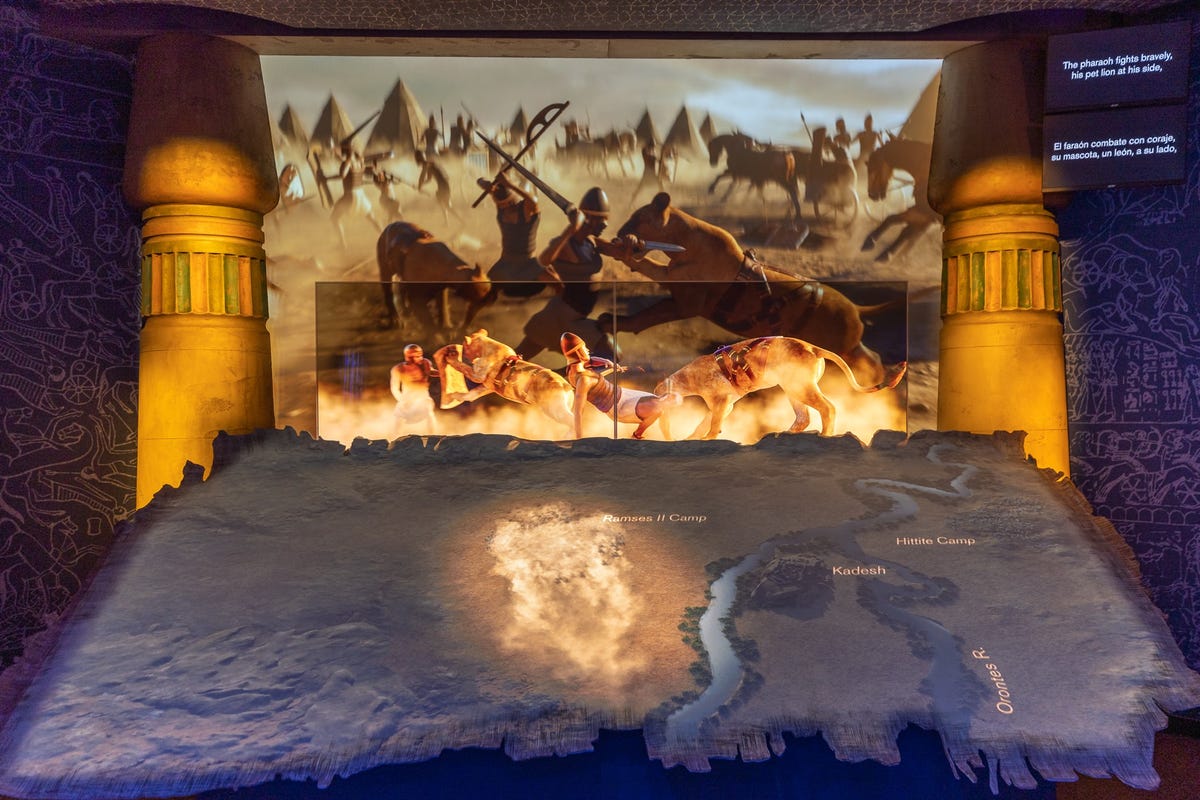 One gallery contains the elaborately decorated wooden outer coffin of an elite artisan who helped build and decorate royal tombs during the reign of Ramses II and his father, Seti I. Giant displays lining the gallery walls, and suspended from its ceiling, project the coffin’s elaborately painted scenes as theatrically lit photo murals. Smaller displays hang above glass cases containing other ancient artifacts, to highlight every detail.

In this era of immersive exhibits that can steep you in a painter’s world through 65 million pixels, care must be taken not to let technology elements overshadow the art, says Thomas P. Campbell, director and CEO of the Fine Arts Museums of San Francisco.

“But if done right,” Campbell told me, “the tech components will add helpful context and enhance the visitor experience, and can act as a bridge into art, an invitation for new audiences to connect with works of art in our galleries.”

Indeed, nothing turns up the immediacy here like the VR journey, which serves as a tantalizing time capsule of Egypt’s famous Golden Age, courtesy of an HP Reverb G2 gaming headset that delivers a hyperrealistic virtual experience.

I’ve been on a few virtual-reality adventures, but none as multi-sensory as this one, which transports you through 360-degree sandstorms to reach two monuments Ramses II built for his beloved wife Nefertari.

Comfy pod-chairs that twist, turn and shake make it almost impossible to believe you’re not actually floating through the entrance to the massive rock-cut temples at Abu Simbel just like the digital representation of the queen.

As I descended the steep steps of Nefertari’s famed tomb into one of its chambers, I thought I might tumble out of my chair and down the stairs onto the stone floor. I constantly turned my head to catch the sights over both shoulders. A smell component even delivered quick rushes of six scents, including frankincense, lavender and gunpowder, via a small dispenser hardwired into the chair. Ahhh, the aromas of 1200 BCE. 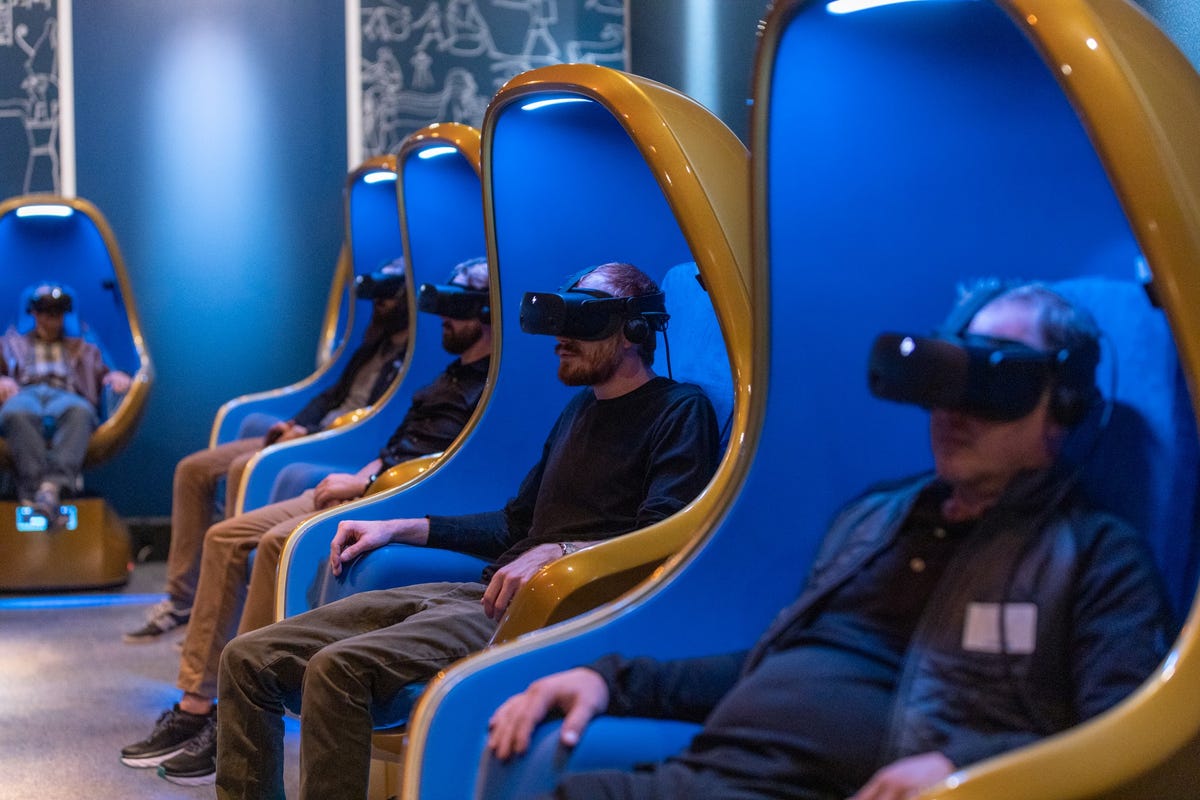 The cinematic motion chairs in Ramses + Nefertari: Journey to Osiris twist, turn and shake to give a sense of movement.

Virtual reality hasn’t exactly become the mainstream technology some had predicted, but with the right equipment and software, VR can truly shine as an art form, especially in short experiences like this one, titled Ramses + Nefertari: Journey to Osiris and produced by World Heritage Exhibitions.

“The VR experience serves an educational purpose, and really brings to life the stories, people and places that our visitors get acquainted with in the exhibition,” Campbell said. “With a fun twist, of course.”

The dreamlike experience lasted more than 10 minutes, and honestly, I didn’t want it to end.

Those who feel the same may be heartened to learn that part of the proceeds from exhibit tickets will help fund ongoing efforts to excavate and restore the 700-foot-long tomb of Ramses II. Ancient tomb raiders plundered it, and flooding later left it severely damaged. 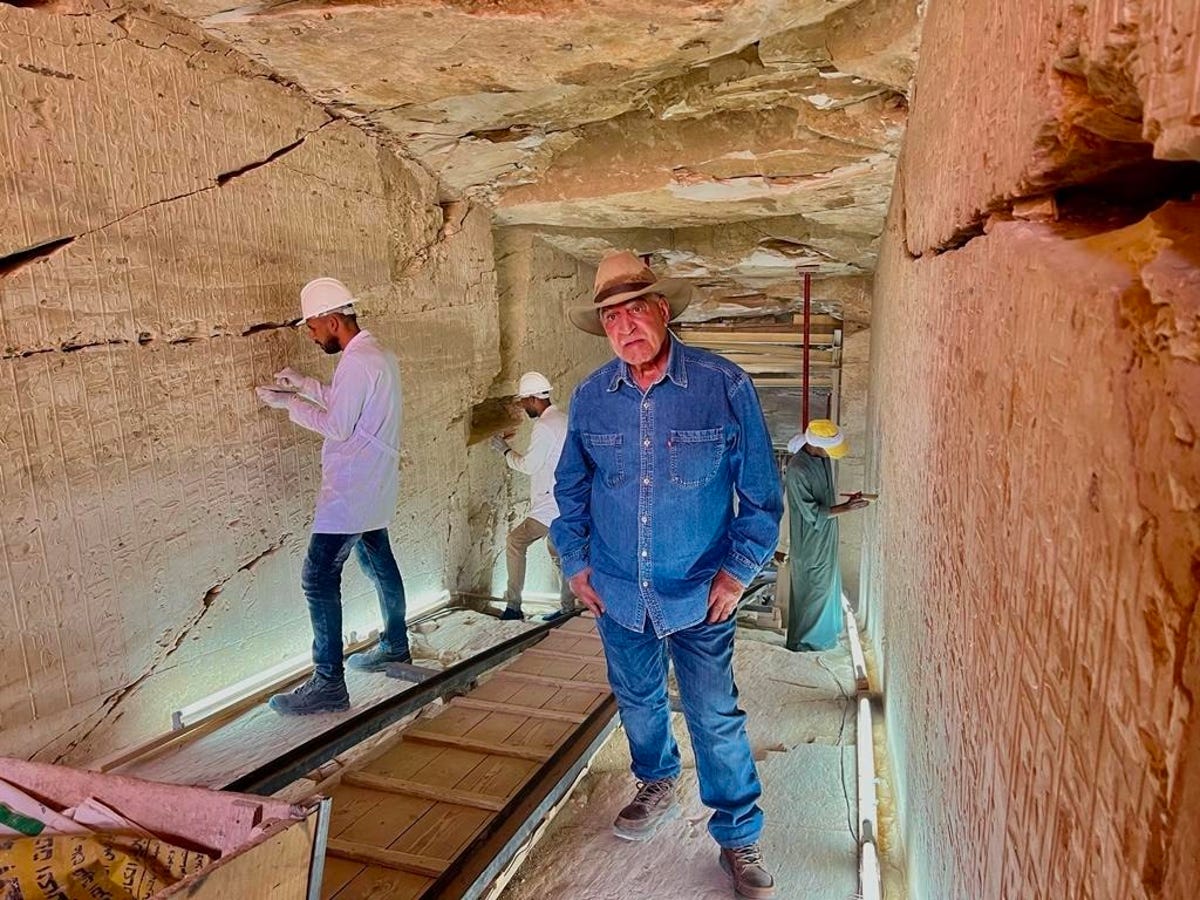 Archaeologist Zahi Hawass is leading a team that’s working to restore the tomb of Ramses II, which was badly damaged by flooding.