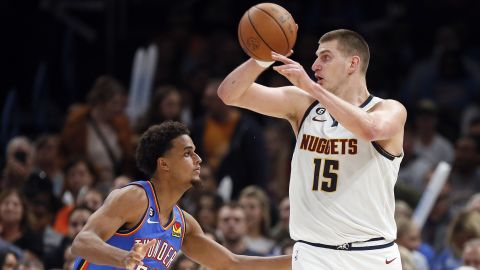 Nikola Jokic broke new ground on Thursday as he recorded yet another triple-double in the Denver Nuggets’ 122-110 win over the Oklahoma City Thunder.

The back-to-back MVP scored 15 points with 13 rebounds and 13 assists to overtake Wilt Chamberlain for the most triple-doubles ever recorded by a center.

Despite his noteworthy achievement, the 27-year-old was not getting carried away.

“It’s nice being compared to a guy who is probably one of the best ever,” Jokic said in an on-court interview when asked for his thoughts on overtaking Chamberlain.

“It’s some kind of legacy that I leave behind, so it’s nice.”

Jokic, in his eighth season of the NBA, had a slow start to Thursday’s game against the Thunder, scoring just two points in the first half.

Brooklyn Nets guard Kyrie Irving (11) dribbles against the Indiana Pacers during the second half of an NBA basketball game in New York on Monday October 31, 2022.

Kyrie Irving will begin suspension of at least 5 games Friday over antisemitism controversy. The NBA star has since apologized

However, his Nuggets team went into the second half ahead thanks to the impressive performance of Aaron Gordon, who finished the night on 27 points.

Jamal Murray also added 24 points for the Nuggets, who bounced back from defeat against the LA Lakers.

The Thunder fought back in the third quarter on Thursday and were leading 95-93 heading into the fourth but the Nuggets reestablished their lead before the end.

“Was it a complete 48 minutes? No,” Nuggets coach Michael Malone told reporters after the game.

“But the thing I’m most proud about is that even when they were on that huge run in the third quarter and we just seemed to stop playing any defense and we turned the ball over ad nauseam, we regrouped. We didn’t panic.”

The Nuggets will host San Antonio Spurs on Saturday in its next game with Jokic chasing down James, who sits fifth in the all-time triple-double list on 105.