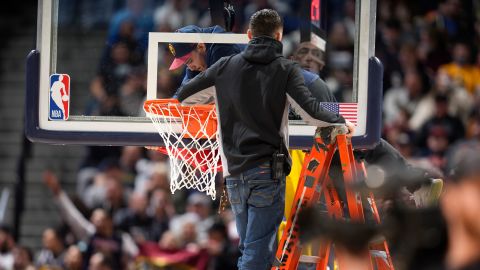 Workers straighten the rim of the basket on Friday.

On Sunday, officials worked frantically to level one of the rims, which appeared to have been bent out of line by the Boston Celtics’ Robert Williams III, causing a 35-minute delay.

On Friday, the rim was fixed much faster as workers used a wrench to fix the problem, according to ESPN, in the fourth quarter, meaning the game re-started within less than 10 minutes.

It gave Nuggets’ Jamal Murray plenty of time to sit among the fans, however, and take selfies as players and fans waited for the game to resume.

Nuggets coach Michael Malone told reporters after the game, which the Nuggets won 121-108 against the Cleveland Cavaliers: “Don’t get me started. It’s not good for my blood pressure.”

Nikola Jokic had 28 points, 15 rebounds and 10 assists for his 10th triple-double of the season, while Murray scored 18 points. 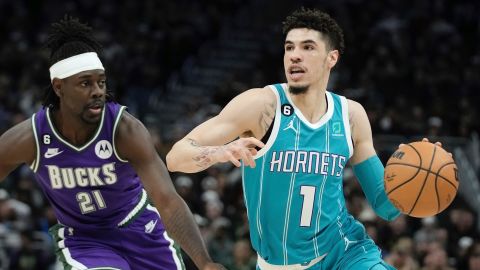 LaMelo Ball goes past Milwaukee Bucks’ Jrue Holiday during the first half.

Elsewhere, the Charlotte Hornets scored 51 first-quarter points, tying the NBA record for most points in an opening quarter and setting a franchise record for any quarter, as they beat Milwaukee Bucks 138-109 on Friday.

The Hornets also tied the highest single-quarter total in the league this season and scored a franchise-record 84 points in the first half. 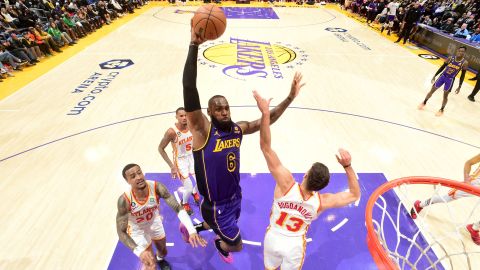 LeBron James drives to the basket against the Hawks.

In LA, LeBron James returned from an illness to inspire the Lakers to a 130-114 win over the Atlanta Hawks.

James scored a team-high 25 points as the Lakers won their fourth straight game.