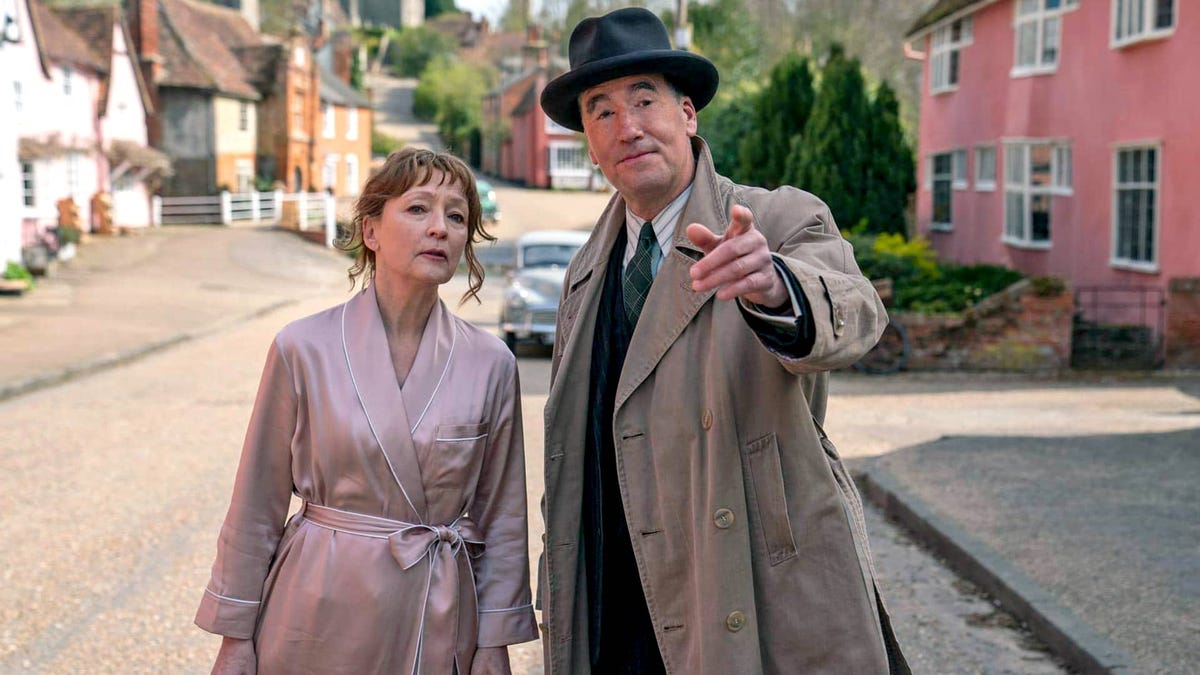 In Magpie Murders, Lesley Manville and Tim McMullan play a detective duo on the trail of more than one mystery. The series originated on PBS Masterpiece and can now also be seen on Prime Video.
Nick Wall/PBS

Why does anyone kill anyone? Fictional detective Atticus Pünd poses that question in the intriguing British mystery series Magpie Murders before answering it based on his own crime-solving experience as star of a blockbuster line of mystery books. “I can think of four reasons,” he says. “Fear, envy, anger and desire.”

That doesn’t narrow the suspects much in the case of Pünd’s creator, author Alan Conway, who suffers a fatal fall shortly after handing his long-awaited latest novel Magpie Murders over to his publisher. It seems no one liked the prickly, impudent writer, played by Conleth Hill (Lord Varys in Game of Thrones). Not his son or his scorned young lover, who’s just been kicked out of Conway’s country mansion in Suffolk. Not his sister, who resents the “grotesque loser” characters her sibling clearly bases on her. Certainly not the angry fellow writer who claims Conway plagiarized him.

Start twisting your Hercule Poirot handlebar ‘stache, you’ve got lots of potential motives and clues to ponder here. And once you’ve been sucked into the witty, suspenseful six-episode PBS Masterpiece series also streaming now on Amazon Prime Video, you might not want to apply your gray matter to much else.

See, it’s not just Conway who dies in this time-traveling meta-mystery based on the 2016 bestselling book of the same name by Anthony Horowitz. The story-within-a-story format also follows the events of Conway’s novel Magpie Murders itself, which sees the decapitation of one Sir Magnus Pye, a loathsome wealthy townsman in the 1950s with enemies of his own. You get more than a single mystery for the price of one here, with impressively interwoven storytelling seamlessly connecting the parallel and increasingly intersecting timelines.

The overlap includes actors doing dual duty in past and present narratives, and the conceit works well to reinforce recurring motifs. The performer who plays Conway’s son in the present day, for example, also plays Pye’s son in Conway’s Magpie Murders — and both hate their fathers. The actor who plays Conway’s sister also portrays Pye’s sister back in the ’50s narrative — and both have significant grievances against their brothers.

Conway’s publisher Charles Clover is sure the author died of his own volition (there was a suicide note after all). But as Conway’s editor Susan Ryeland searches for the missing last chapter of Magpie Murders, she begins to suspect otherwise.

Good thing the plucky Pünd has stepped off the pages of Conway’s novels and into Ryeland’s imagination so he can advise her as she pivots from editor to amateur detective. Figuring out how and why Conway died might lead Ryeland to the MIA manuscript so her employer Clover Books can get its bestselling author’s latest work to readers eager to solve another Pünd mystery. “A whodunit without the solution … it’s not even worth the paper it won’t be printed on,” she laments.

Pünd (Tim McMullan, Patrick Melrose) and the ambitious, frequently frazzled Ryeland (the ever marvelous Lesley Manville from Phantom Thread and the moving Mike Leigh film Another Year) make for a formidable investigative team as they puzzle their way through modern-day London and mid-20th-century Saxby-on-Avon, a charming fictional village where neighbors politely greet one another on a main street lined with flower stands and quaint antique shops. It’s also a town of dark buried secrets and the site of Sir Magnus Pye’s gory murder in Conway’s novel Magpie Murders.

If it all sounds a bit confusing, a strength of the series, skillfully directed by Peter Cattaneo (The Full Monty), is how it manages to flow between timelines, often in highly creative ways. In one scene, for example, Pünd and his assistant reach a fork in the road in their 1950s auto, when who zips past in her little red sports car to sweep us back into the present? Susan Ryeland.

The past and present also echo one another in themes: parent-child relationships, mortality, deceit and cruelty. “Everything in life is part of a pattern,” Atticus Pünd tells his dim sidekick in Magpie Murders. I’ll leave it to you to investigate which ones apply. 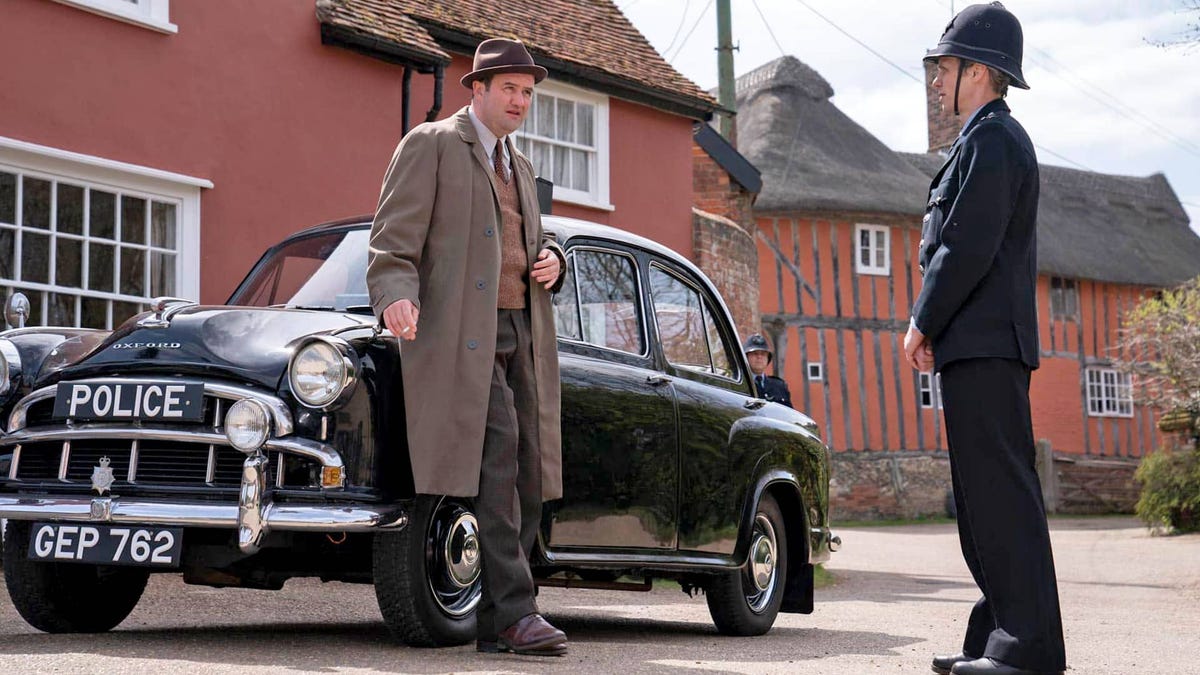 Daniel Mays stars as Raymond Chubb, a 1950s inspector, in Magpie Murders. Like other actors in the time-traveling series, he does double duty, appearing as a second character in present-day scenes.