Kathy Whitworth, the winningest golfer in history, dies at 83 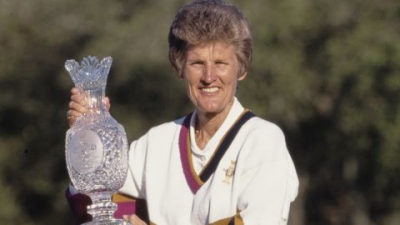 Kathy Whitworth is pictured on November 18, 1990, at the Lake Nona Golf & Country Club in Orlando, Florida.

Kathy Whitworth, the winningest golfer in history, has died at the age of 83, the Ladies Professional Golf Association announced on Sunday.

“Kathy left this world the way she lived her life, loving, laughing and creating memories,” Odle said in a statement.

Odle did not disclose any details on the cause of death.

Whitworth is considered one of the greatest golfers of all time. She had 88 wins on the LPGA Tour which include six LPGA major championships. Her 88 wins are six more than Sam Snead and Tiger Woods, who hold the record for the men’s game.

In 1981, Whitworth became the first LPGA golfer to earn $1 million in career earnings. A year later, she was inducted into the World Golf Hall of Fame.

“Kathy was a champion in the truest sense of the word, both on the golf course and off. In the short time I spent with Kathy, I was truly blown away by her and her approach to the game and to life,” LPGA Commissioner Mollie Marcoux Samaan added in the statement.

“Her strength, insightfulness and vibrancy were obvious from the minute you met her! She inspired me as a young girl and now as the commissioner and I know she did the same for so many others. We all mourn with Bettye, her family and the entire golf world.”