‘I am one of the favorite players to win Roland Garros’: The meteoric rise of 19-year-old Carlos Alcaraz 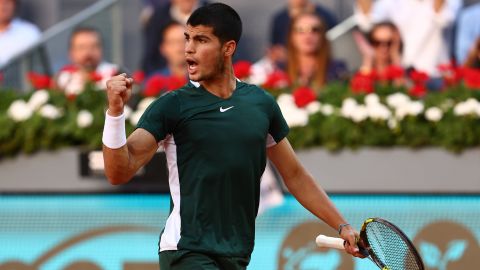 Carlos Alcaraz has risen from No. 32 in the world at the beginning of the year to No. 6 ahead of the French Open.

Once a ruling dynasty has been established, it can prove difficult to shift.

On July 6, 2003, the day after Alcaraz turned two months old, Federer won his first grand slam title at Wimbledon, kickstarting an era in which the ‘Big Three’ have been victorious at 61 of the past 74 grand slam tournaments.

In that time, various players have been billed as the “next generation” in men’s tennis; in 2015, it was Grigor Dimitrov and Milos Raonic; in 2019, it was Alexander Zverev and Stefanos Tsitsipas; in 2022, it is Carlos Alcaraz. 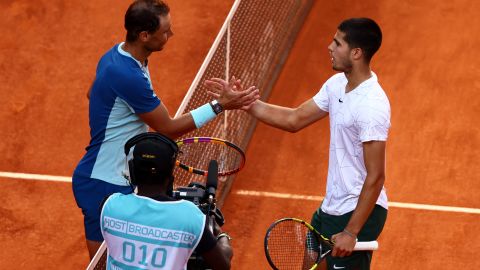 Alcaraz (right) beat Nadal in three sets in the quarterfinals of the Madrid Open earlier this month.

So far, none of this “next generation” have consistently challenged the dominance of the ‘Big Three,’ though there is something different about Alcaraz – something not seen since the exploits of his compatriot Nadal.

Like Nadal, Alcaraz entered the top 10 for the first time after winning the Barcelona Open as an 18-year-old. He’s also the youngest man since Nadal to enter the top 10 and win an ATP 1000 title.

“All of these greatest of all time players … were great already as teenagers or showing flashes of being great as teenagers,” tennis journalist Ben Rothenberg told CNN Sport.

After he won the Miami Open in April, Alcaraz outlined his relatively modest goals for 2022 to CNN’s Don Riddell – breaking into the top 10 of the world rankings and reaching the quarterfinals of a grand slam.

Just three weeks later, Alcaraz entered the top 10 after he took victory at the Barcelona Open.

Two weeks after Barcelona, Alcaraz won his fourth title of 2022 at the Madrid Open, defeating Nadal and Djokovic on his way to the final.

So far this year, he has amassed a remarkable 90% win rate – a percentage that increases to 94% on clay.

Following these victories and his meteoric rise to the very top of the sport, Alcaraz reoriented his goals for the year.

“I would say that I am one of the favorite players to win Roland Garros,” Alcaraz told CNN.

“There are a lot of great players – Rafa, Djokovic, the best players in the world are going to play there, but I think I’m ready to do a good result in Roland Garros.” 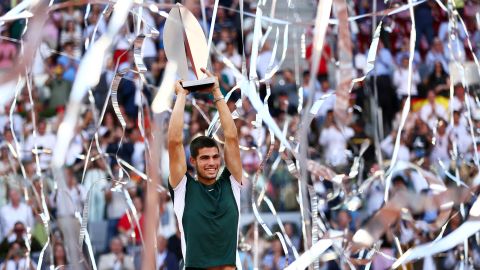 If Alcaraz is to win his first grand slam at Roland Garros, he will have to do it the hard way as the 19-year-old is in the same half of the draw as both Nadal and Djokovic.

“Carlos will reach wherever he would like to,” Alcaraz’s fitness coach Alberto Lledó told CNN Sport.

“If he targets a goal and keeps working with the same commitment as until now, he will be able to achieve it.”

Alcaraz’s ascent to becoming one of the favorites at Roland Garros began in his hometown of El Palmar on the outskirts of Murcia, where he was talent-spotted at age 11 by his now agent Albert Molina.

Four years later, Juan Carlos Ferrero – a former world no. 1 and runner-up at the French Open – began coaching the youngster.

Their close relationship was evident at the Miami Open where Ferrero was absent for much of the tournament because his father had passed away.

“This is for Juanki. The win is yours,” Alcaraz wrote in Spanish on a camera lens after his semifinal victory.

Once Alcaraz had reached the final, Ferrero flew to Florida to surprise and support his young charge. 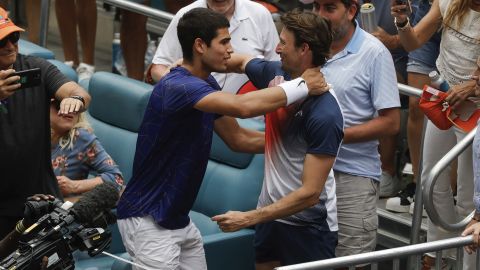 “It means a lot to me to be able to share this special moment for me with him,” Alcaraz said.

“He has been through a tough moment right now. He came away from his family for a couple of days to stay with me and it is so good for me.”

Ferrero and the rest of Alcaraz’s team have instilled a mentality that emphasizes the importance of perseverance and hard work – “a culture of effort” as his physiotherapist Juanjo Moreno calls it.

As is often the case with young athletes, Alcaraz’s breakthrough at the highest level of the sport seems to have occurred overnight following huge improvements during the offseason. In fact, the opposite is true, according to Moreno.

“This year we had a long preseason, so we have been able to focus further on his fitness development, but the fitness change is the result of Carlos’ hard work for a long time, changing his habits of work, rest and diet,” Moreno said.

The key to success

This “culture of effort” also translates into Alcaraz’s performances on the court.

His athleticism forms the basis of his game, allowing him to unleash aggressive ground strokes and defend audaciously from all areas of the court.

“I think I go for every match and every moment,” Alcaraz said. “I do not fear anything, I don’t mind if I play against any player in the world.”

It is this consistency across all areas of the game that seems to be the key to his success.

He does not have one overwhelming strength – such as an extraordinarily powerful serve – that can be neutralized by specific tactics, nor does he have an obvious weakness. 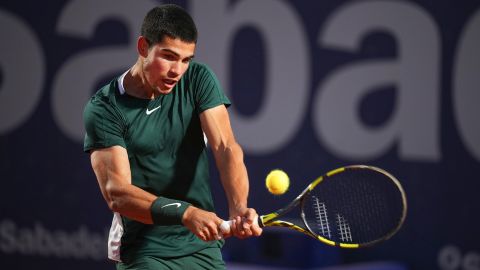 Alcaraz is in his second full season on the ATP Tour.

“He’s an incredibly complete, well-rounded player for someone so young and he can do it all,” Rothenberg said.

“He seems very sharp tactically, he has a very good tennis IQ and physically he has been great too.”

For Lledó, it is Alcaraz’s mentality and “the personality he shows in the tough moments, his way of facing them” that mark him out as a special talent.

In his quarterfinal against Nadal at the Madrid Open, for example, Alcaraz was outclassed 6-1 in the second set but still rallied to win the match, while he tjhen eked out a 6-7(5) 7-5 7-6(5) victory against Djokovic in the semifinal.

As well as Alcaraz’s prodigious talent on the court, he has an easy charm and broad grin that endear him to the crowd wherever he plays.

“No one really has a bad word to say about [him],” Rothenberg said.

‘Another star is born’

With each championship that Alcaraz wins, the media hype around him grows a little louder as men’s tennis longs for a new storyline and a new star.

Back in Spain, the country’s sports newspapers hailed their new, all-conquering hero after his victory at the Madrid Open.

Simona Halep shares a light hearted moments with coach Patrick Mouratoglou during training on Court Philippe Chatrier in preparation for the 2022 French Open Tennis Tournament at Roland Garros on May 18th 2022 in Paris, France.

Simona Halep: 'He brought that fire back': How Patrick Mouratoglou helped former world No. 1 rekindle her love for tennis

“Charlie you are great,” said Marca’s headline; El País declared that “another star is born,” while AS’ front page simply read “Blessed” in front of a picture of Zverev pouring champagne over Alcaraz.

Alcaraz himself seems to be avoiding most of this coverage.

“A lot of people were watching me, congratulating me,” Alcaraz told CNN after his victory in Miami.

“Social media right now is like a boom, and I have not had time to read everything yet but it is amazing that a lot of people and newspapers talk about you.” 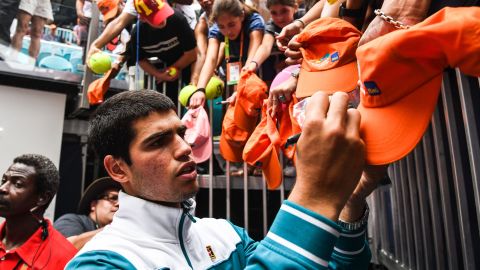 Alcaraz has become a huge star in his home country.

As for overturning the regime that has ruled men’s tennis for the last two decades, Alcaraz is reluctant to cast himself as a revolutionary heralding a new era.

“I’m a lucky guy to learn from these guys [Nadal, Federer and Djokovic] so close – to share a locker room, to share courts,” he said. “I hope to watch them for many years.”

But regardless of how long the ‘Big Three’ can prolong their illustrious careers, Roland Garros could be about to witness the first genuine challenge to the established order in men’s tennis for a long time.