Carlos Alcaraz will miss the Australian Open due to injury 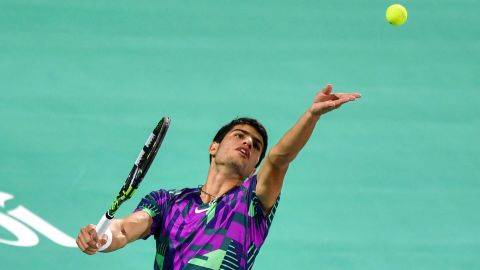 Men’s world No. 1 tennis player Carlos Alcaraz will miss this month’s Australian Open due to a leg injury, the 19-year-old Spaniard said on Friday.

In a tweet, Alcaraz said he injured a muscle in his right leg “through a chance, unnatural movement in training.”

“It’s tough, but I have to be optimistic, recover and look forward. See you in 2024 @AustralianOpen,” he wrote.

The Australian Open would have been Alcaraz’s first grand slam since wining the 2022 US Open in September.

Last year, Alcaraz won five ATP titles and became the youngest No. 1 in men’s tennis when he won his first grand slam title in New York. He is the youngest man since Rafael Nadal to enter the top 10 and win an ATP 1000 title.

AUCKLAND, NEW ZEALAND – JANUARY 05: Emma Raducanu of Great Britain is in tears as she withdraws injured during her singles match against Viktoria Kuzmova of Slovakia on day four of the 2023 ASB Classic Women’s at the ASB Tennis Arena on January 05, 2023 in Auckland, New Zealand.

At the age of 19 years and 214 days, Alcaraz also became the youngest year-end No. 1 in the history of men’s tennis, surpassing Lleyton Hewitt’s record set in 2001.

This is not the first tournament Alcaraz has missed due to injury. He sat out the 2022 ATP Finals in Turin, Italy in November to recover from an abdominal injury sustained at the Paris Masters earlier that month.