NASA’s Hubble Space Telescope snapped a pair of “dazzlingly different” images of a brilliant star cluster some 160,000 light years away.

Globular cluster NGC 1850, in the constellation Dorado, is approximately 63,000 times the mass of the sun, is 100 million years old and is located in the Large Magellanic Cloud, NASA said in a news release.

A birthplace for billions of stars, the Large Magellanic Cloud is a satellite galaxy of the Milky Way.

The agency said that the telescope used filters with specific assigned colors to study particular wavelengths of light emanating from NGC 1850 and its surrounding stars. 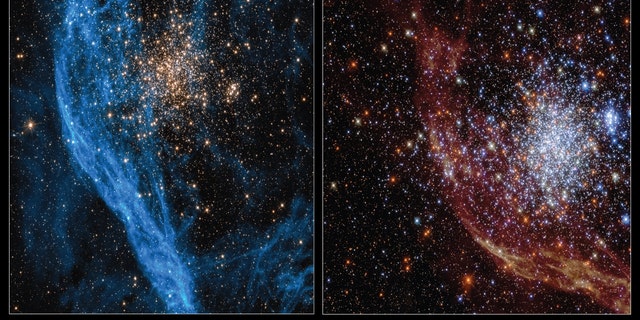 One image with blue nebulosity includes near-infrared light as well as visible light, while the other with red nebulosity covers the near-ultraviolet to the beginnings of the infrared spectrum.

NGC 1850 is a spherical collection of densely packed stars held together by mutual gravitational attraction, the release said.

However, unlike most globular clusters, its stars are relatively young. 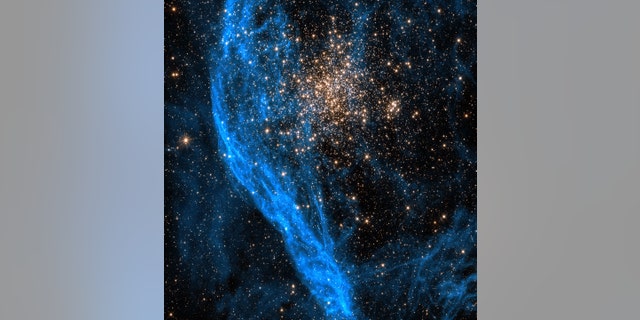 This Hubble image shows the star cluster NGC 1850, located about 160,000 light-years away. For this image, two filters were used with the camera to gather data, one at visible wavelengths, the other at near-infrared wavelengths.
(NASA, ESA and P. Goudfrooij (Space Telescope Science Institute); Processing: Gladys Kober (NASA/Catholic University of America))

According to scientists, the theory is that the first generation of stars in the globular cluster ejected matter into the surrounding cosmos when they were born.

However, the density of the cluster was so high that the matter could not escape its gravitational pull, causing it to stay nearby, and the gravity of the cluster also pulled in hydrogen and helium gas from its surroundings. 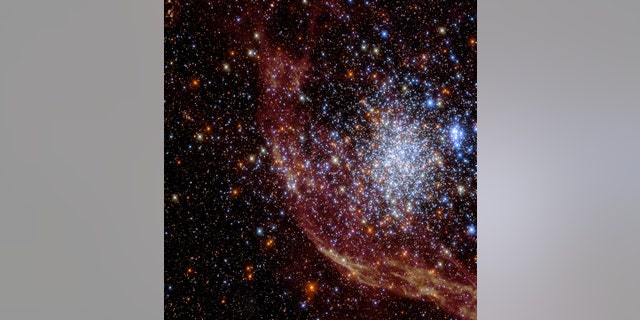 For this Hubble image, five filters were used with the camera to gather data. Two of the filters were at near-ultraviolet wavelengths, two more at visible light wavelengths and the final one was in the near-infrared.
(Credits: NASA, ESA and N. Bastian (Donostia International Physics Center); Processing: Gladys Kober (NASA/Catholic University of America))

The sources of gas created a second generation of stars, increasing both the density and size of the globular cluster.

The presence of a black hole was found in NGC 1850 and there are also around 200 red giants and many brighter blue stars.

Surrounding the cluster is a pattern of nebulosity, diffuse dust and gas theorized to come from supernova blasts.