Ghosts of Kennecott: Exploring an Abandoned Copper Mine in Alaska 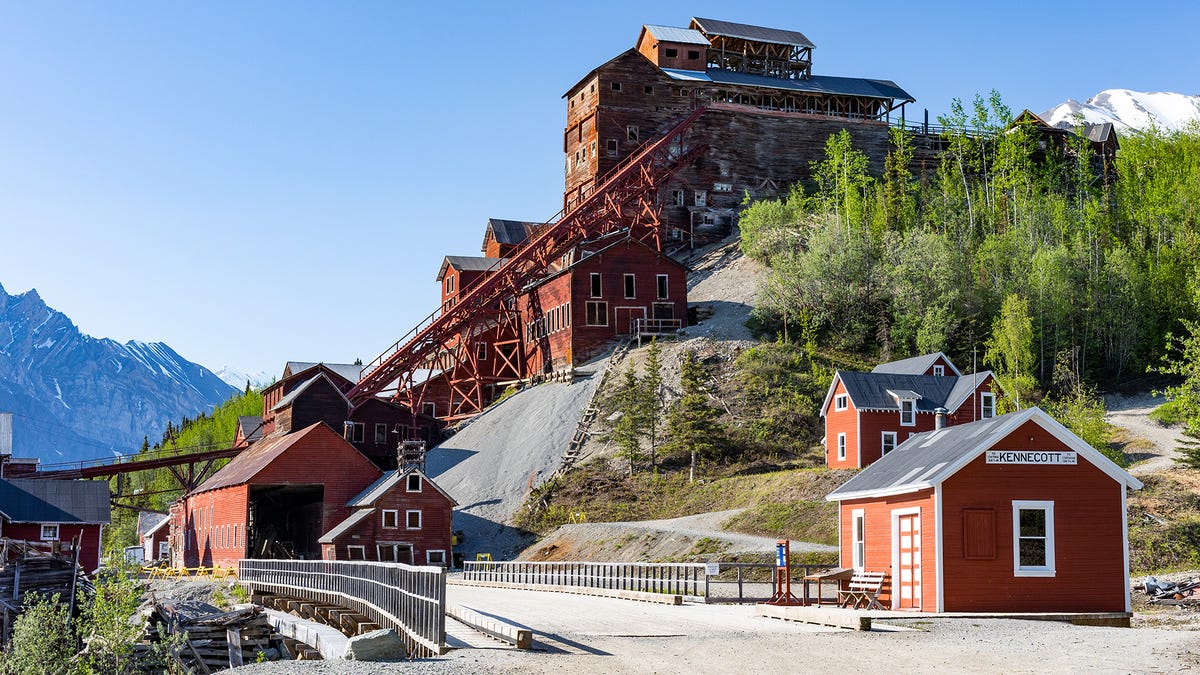 The 14-story Kennecott Concentration Mill is worth the epic trip.
Geoffrey Morrison/CNET

The washboard gravel road had lost all novelty. Hours now seemed like days, feeling like nearly a week since we’d turned off Alaska Route 10 for this endless bone-jarring, time-distorting road to nowhere. OK, not nowhere, a very specific where. Deep in the heart of Wrangell-St. Elias National Park sits the ghost town of Kennecott.

Once a thriving and lucrative copper mine, it was closed in the 1930s and completely abandoned by the ’60s. Today it’s home to the decaying remains of one of the largest free-standing wooden structures in the world. Surrounded by steep mountains and enormous glaciers, it’s as remote a location as you can get and one of the most amazing places in the world.

There are abandoned mines like this all over Alaska, but few were as significant and successful as Kennecott. An entire town was built to help service the mine. Hours from even the most minor trace of civilization, there was a store, dance hall, barracks and even a school. Only a handful of people live here now, and fewer still through the harsh, dark, Arctic winters. It takes a hardy soul to survive up here.

I’m visiting here with my dad. We converged on Seattle from opposite corners of the US, then flew up to Alaska. A grand adventure to explore my 50th state. When we finally made it to Kennecott, after eight hours of rural highway and the brutal McCarthy Road, what I saw was unlike anything I’d ever seen.

Check Out the Abandoned Kennecott Copper Mine in Alaska 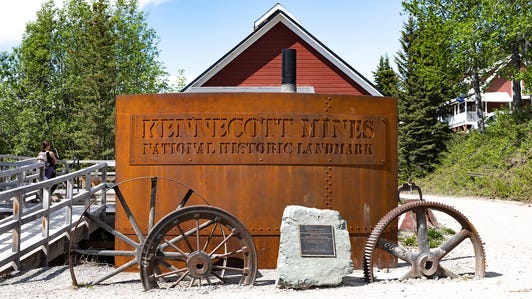 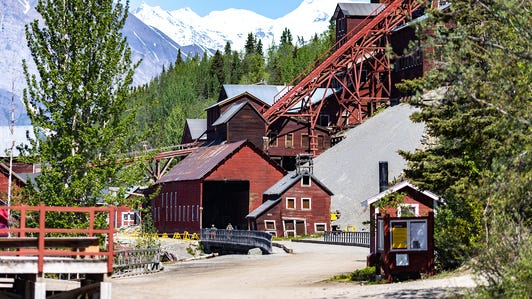 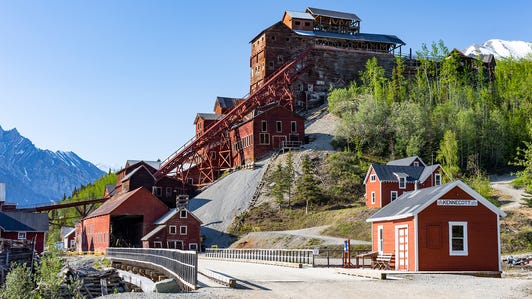 The Kennicott (yes, with an “i”) Glacier stretches out like some vast dimpled plain. Coated with a thick gray moraine — the material left after the retreat of a glacier — the white ice below only peeks out from cracks and edges. Distance is extraordinarily deceptive. From the lodge it looks like the far mountains are just a short walk away, but they’re miles. Each peaked moraine hill looks no bigger than a mogul, but they’re larger than houses. This is a strange place to find a mine, but with the promise of wealth, people will go to the ends of the earth. 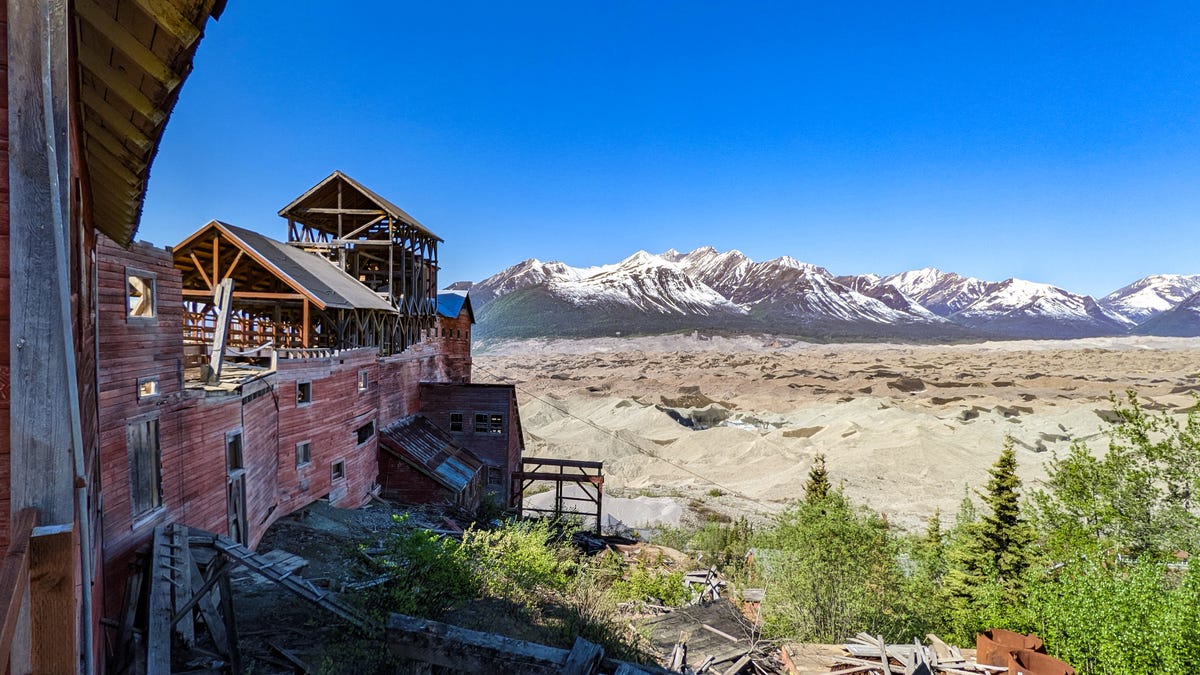 A few of the top of the Kennecott Concentration Mill, the Kennicott Glacier and, in the distance, the Wrangell mountains.

First established in 1900, the Kennecott Copper Mine grew in stages for the next 20 years. The fight against nature, weather and common sense was worth it for one of the richest copper deposits ever found. By the time the mine closed for good in 1938, up to $6 billion in today’s dollars was pulled from the unforgiving hills. A small, close-knit community built up around the mine, something that’s common all over the world. Remnants of this can still be seen on the edges of the Kennicott Glacier. Century-old equipment rusts where it was parked; buildings sag and lean. And then there’s the Concentration Mill, a 14-story timber behemoth that looks like something out of an apocalyptic sci-fi movie. Nothing that old, and made of that much wood, should be that large.

The US Parks Department maintains the buildings in a state of sort of preserved decay. It’s not going to fix them up, but it won’t let entropy return them to dust. A sort of pause in the natural devolution of these historic buildings, so they can be enjoyed for generations to come. 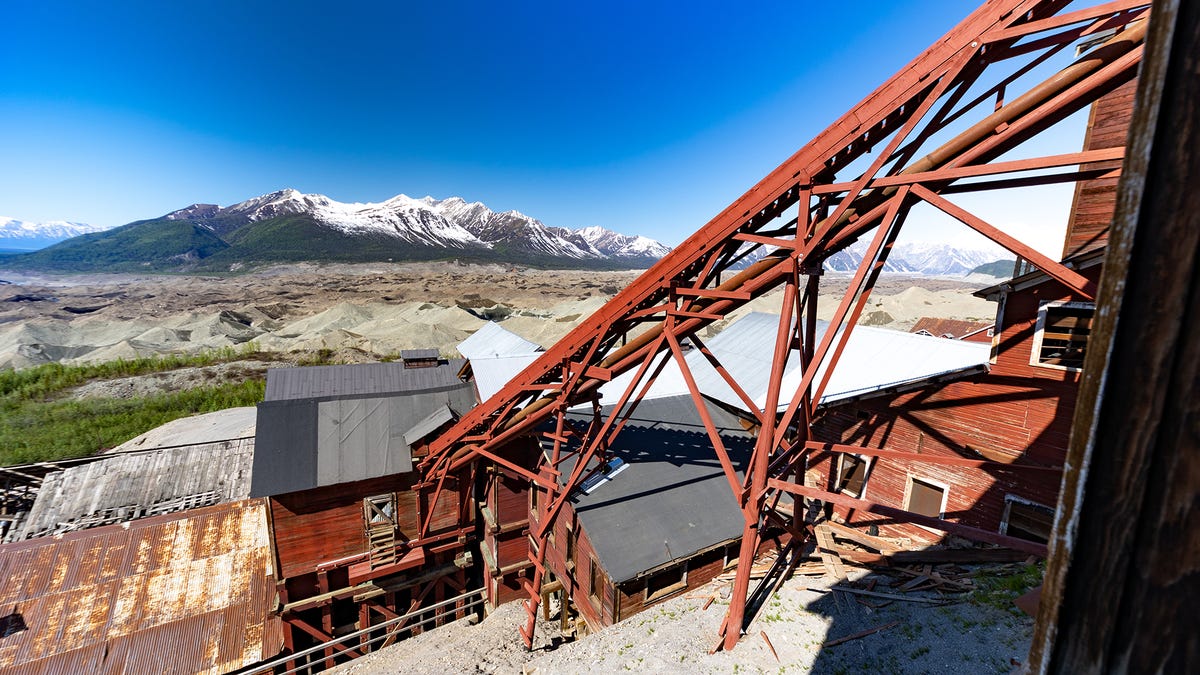 High-grade copper ore would bypass the mill and head directly down this chute to be packaged and hauled out.

Four mines fed the Mill at Kennecott, all over three miles away and 2,500 feet up the side of Bonanza Ridge. A series of aerial tramways brought ore down and men up. The tramways are long gone, but you can explore the mines if you’re an avid and prepared hiker. I am neither. My dad turns 80 this year and I’m confident, had he wanted to, he would have gone up and back before I had second breakfast. Instead, we explored Kennecott. 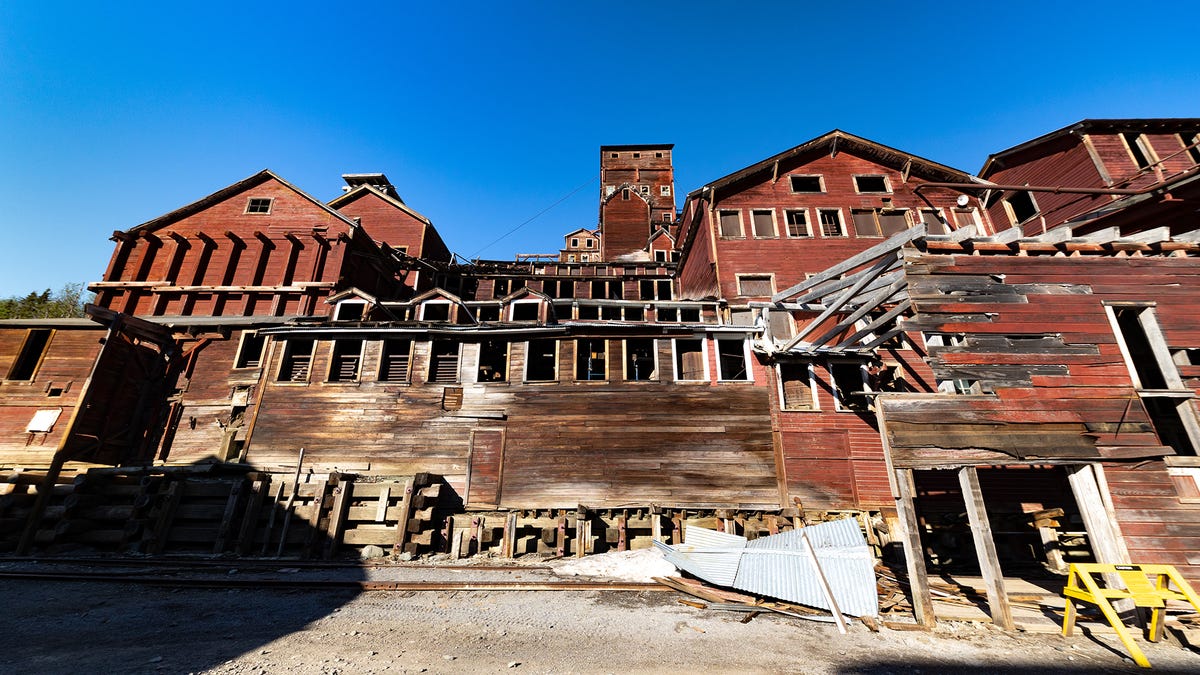 A view from the ground up at the many layers and roofs of the Concentration Mill.

The Concentration Mill is a veritable skyscraper of timber and OSHA violations. There’s a guided tour. They supply helmets, which I think is going to help about as much as wearing SPF 30 for a vacation on the sun. Structurally, and reassuringly, there’s no wobble. The building seems held together by ancient spite. Despite clear examples of collapse and missing seemingly important structural supports, it’s remarkably solid for a 100-year-old wood building in the Alaskan wilderness. Better shape than I would be after 100 years, that’s for sure. Better shape than I am now, to be honest.

Raw material comes in at the top and copper ore comes out the bottom. Each floor in between has a purpose to sort or shake, often both, the copper from the limestone. By the time the material reaches the lower floors, it’s practically dust. Tiny slivers bouncing across shaker tables, some worth something, most worth nothing.

Ghosts of the ice 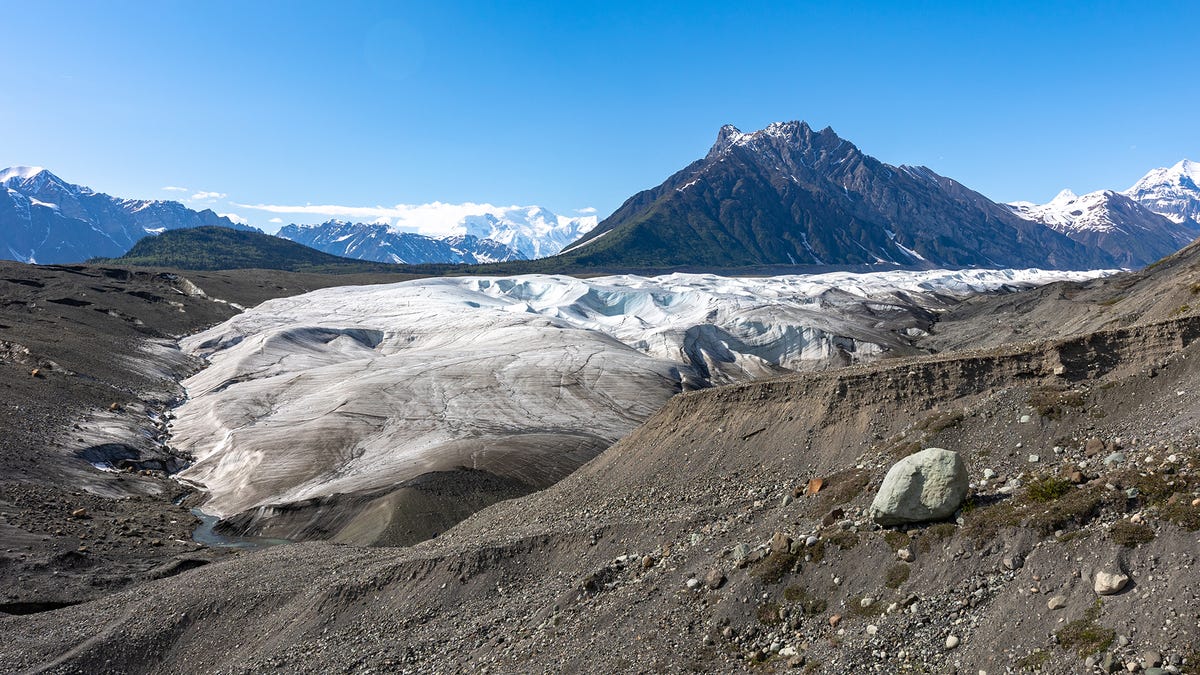 The nearby Root Glacier, which combines here with the Kennicott Glacier.

The next day we try to hike out to the foot of the Root glacier. Again, distances are deceptive. It’s several hours to get within sight of it, and in the distance I can see tiny people hiking across the glacier itself, so it would be even longer to get down to it, then back again. So I take some pictures and we call it a day.

On our last day, a surprise. My dad splurged for us to take a flight over the glaciers. It’s one of the most amazing experiences of my life. Snow-capped wilderness as far as the eye can see. If we crash here, there’s no walking out. It’s just miles of snow and ice. 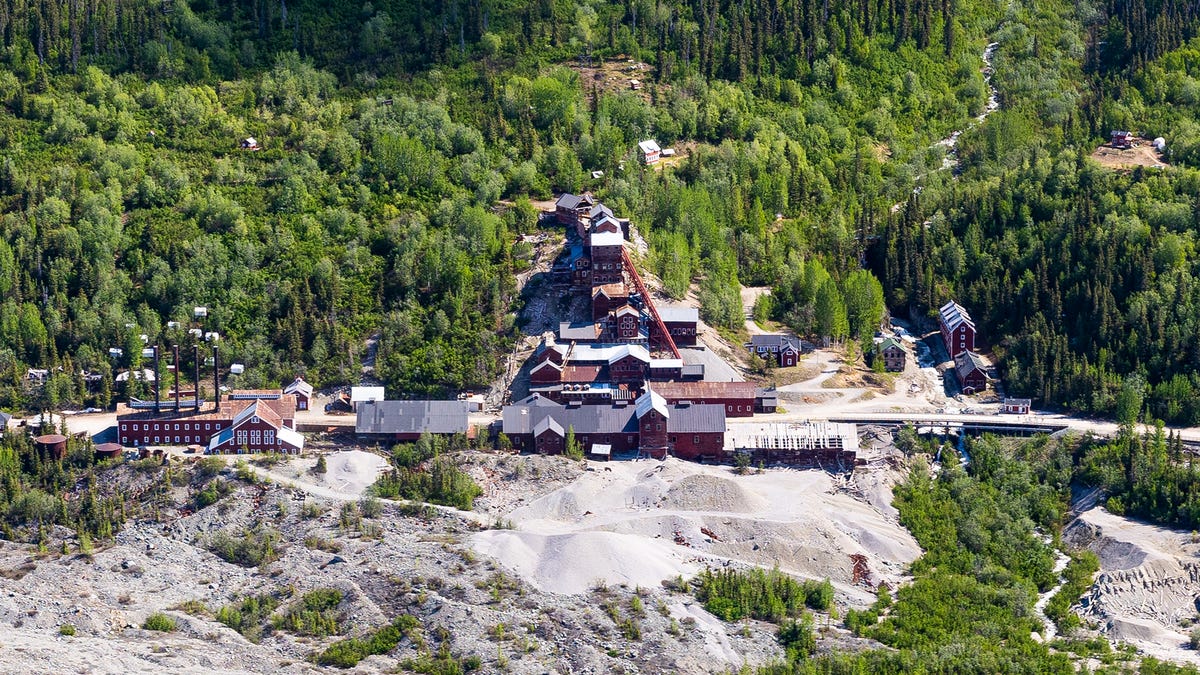 In the mine’s heyday, the top of the glacier wasn’t too far below our current altitude.

Normally I end these photo tour stories with a recommendation to check out the location for yourself. I do, of course. It’s unquestionably an epic journey, but also a difficult one. Alaska is remote, Kennecott even more so. It’s hours by plane, then hours by car. And not easy highway hours either, but many on pounding, rutted gravel. Most of the year there’s snow, and if there’s no snow, there’s mud, bugs or both. There’s no AAA. There’s basically no cell service. It’s the wilderness.

Maybe, though, that’s your thing. For some people it is. A few dozen people live in nearby McCarthy year-round. If so, put this place on your list. It’s incredible. If not, check out the gallery above.