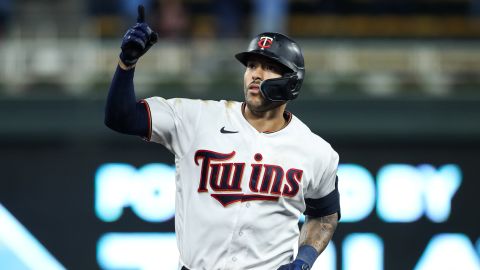 Carlos Correa celebrates his two-run home run against the Cleveland Guardians in September.

The free-agent saga surrounding shortstop Carlos Correa has finally come to an end.

The deal is reportedly worth $200 million, according to the salary tracking website Spotrac.

Minnesota is the third MLB team this offseason with whom the 28-year-old has agreed a massive deal.

After a lone season in Minnesota, Correa agreed on a 13-year, $350 million contract on December 13 with the San Francisco Giants, according to Spotrac. That deal fell through due to concerns arising from his physical.

Eight days later, the New York Mets offered the shortstop a 12-year, $315 million deal, per Spotrac. But that deal also fell apart because of his physical.

In a statement Wednesday, the Mets said: “We were unable to reach an agreement. We wish Carlos all the best.”

Correa signed with the Twins on a three-year, $105.3 million deal, per Spotrac, in March. He opted out of the final two years in November.

Prior to joining the Twins, the 2012 top overall draft pick for the Houston Astros played with the Astros for seven seasons and was named to two All-Star teams in 2017 and 2021.

Correa was part of Houston’s first World Series title team in 2017. He won his first Gold Glove, which is awarded to the best defender at each position, in 2021.