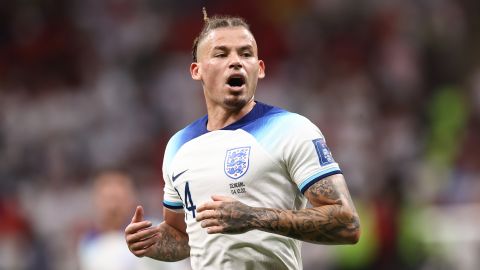 England midfielder Kalvin Phillips returned from the World Cup overweight and not in the right condition to play, Manchester City coach Pep Guardiola has said.

Phillips was used for only 40 minutes as a substitute at the finals, having not started for City since his move from Leeds United in the close season due to a shoulder injury.

Second-placed City, who return to Premier League action at Leeds on Wednesday, will again be without 27-year-old Phillips, much to his manager’s frustration.

“He’s not injured, he arrived (back) overweight,” Guardiola said. “I don’t know (why). He didn’t arrive in the condition to do training sessions and to play.

“That’s why he cannot play. When he will be ready, he will play because we need him, we need him a lot.”

Asked if he was disappointed to see Phillips return in such condition, Guardiola added: “It’s a private conversation with Kalvin.”

They got back to winning ways after the World Cup break with a thrilling 3-2 League Cup victory over Liverpool on Thursday.