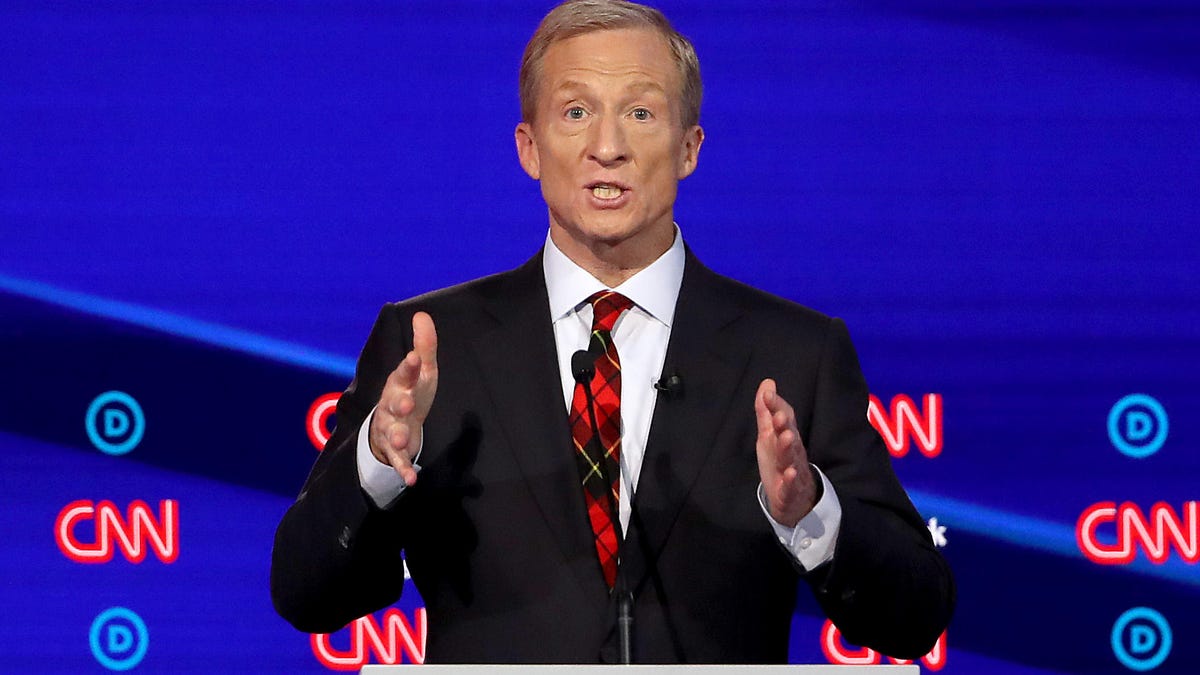 Twelve Democratic candidates for president faced off Tuesday night at Otterbein University in Westerville, Ohio. Eleven had participated in similar debates already this year, but one, hedge-fund billionaire Tom Steyer, was new to the battle.

That’s a lot of people on one stage, but nothing escaped the eagle eyes of viewers. Steyer’s red plaid tie immediately attracted interest. YouTubers The Gregory Brothers snarked on Twitter, “Mr. Steyer, you claim to be a billionaire, and yet, that is your tie.”

“Mr. Steyer, you claim to be a billionaire, and yet, that is your tie.” pic.twitter.com/LAkP9oeaF7

Is Tom Steyer wearing a tie made out of Christmas wrapping paper? Who is he again? The fashion tonight is wild. #DemDebate pic.twitter.com/BfBn0jCQZO

i’m sorry does tom steyer have only one tie????? pic.twitter.com/EjvC5hlOxg

Steyer lookin like a Koopa in a Scotch tape tie 🤣 pic.twitter.com/CvLuYsMSZZ

Is it me or is Tom Steyer’s tie the scotch tape dispenser? #DemocraticDebate pic.twitter.com/filB8rTokh

I must know who told Steyer this tie was the right choice for his debut. #DemocraticDebate

And multiple accounts were quickly set up for the tie itself. “Do I really look like Scotch tape?” one of the accounts asked.

Do I really look like the scotch tape? Lol. At least I’m not Amy Klobuchar’s bruise (or eggplant maybe?) color outfit. OMG! Why the hell did Tom wear me with this blue shirt? Man!

Some viewers commented on the fact that Steyer was the newbie to the group. “Tom Steyer on stage like the RPG character you get late in the game and never use,” wrote Mike Drucker on Twitter.

When there’s suddenly a new debate participant and we’re just supposed to act like they were there all along pic.twitter.com/eQzoWSM0r2

Tech entrepreneur Andrew Yang also earned clothing commentary, this time for a tightly buttoned shirt as well as a MATH pin. “My guy Andrew Yang has been working out,” wrote Twitter user Dave Ross. “That top button is BEGGING to be released.”

My guy @AndrewYang has been working out. That top button is BEGGING to be released!!! #YangGang #DemDebate pic.twitter.com/QCu7Uf1Ibk

We should all be working as hard as Yang’s second button is rn. pic.twitter.com/VVjGXb0Peq

It all adds up

Another Twitter user felt the pin should start a trend.

“I like Andrew Yang’s math pin,” wrote Joseph Scrimshaw. “I feel all the candidates should have a pin with their favorite word on it. Mine would be either LIGHTSABER or MARTINI.

Lots of people tweeting about Andrew Yang’s lapel pin. Yes, it says MATH. Math stands for “Make America Think Harder.” And yes, you can buy one for yourself and you know you want to…https://t.co/6TB269UNSY#DemocraticDebate #YangGang #DemDebate pic.twitter.com/vlJYiNXQEc

I like Andrew Yang’s math pin. I feel all the candidates should have a pin with their favorite word on it. Mine would be either LIGHTSABER or MARTINI. #DemDebate pic.twitter.com/6LyDknth8k

Is Yang wearing that “Math” button because he’s in favor of math?

Former Vice President Joe Biden earned buzz for a mangled word, saying “expodentially” when he apparently meant “exponentially.” Twitter loves nothing more than a new word (“covfefe,” anyone?) and adopted this one right away.

“My interest in these debates has declined expodentially,” wrote one Twitter user.

Wrote another, “I’m gonna need Merriam Webster to weigh in on Joe Biden’s use of ‘expodentially,'” wrote another.

My interest in these debates has declined expodentially.

“When you register your gun, it reduces it being used expodentially.”

… expodentially… Was gonna make fun of it, but its more fun to say than “exponentially.” You get a pass this time, old man#DemDebate

I’m gonna need @MerriamWebster to weigh in on Joe Biden’s use of “expodentially.” #DemocraticDebate

No one has asked me a question in a while. Am I still here? Having an expodential crisis. #expodentially