The 59-year-old “Bullet Train” actor flashed his abs while soaking up the sun in Cabo San Lucas during a New Year’s trip down south with his leading lady.

Ines opted to skip tan lines and went topless for the relaxing day by the pool as they both caught up on some light reading by the water.

Brad Pitt and girlfriend Ines de Ramon kept their shirts in their room for a sun-soaked afternoon in Cabo.
(Backgrid)

The Academy Award winner sported a pair of turquoise blue trunks, and showed off his arsenal of tattoos with ink on his abs and torso while walking around shirtless by the pool.

His signature dark blonde hair was worn tossed to the side, and he shielded his eyes from the bright sunrays in Baja with a pair of shades.

Ines, who works with the LA-based, celebrity-favorite brand Anita Ko Jewelry, wore a simple blue sarong around her waist after taking a dip in the pool.

BRAD PITT’S WILD YEAR: FROM LAWSUITS TO ABUSE ALLEGATIONS AND A NEW RELATIONSHIP

Their relationship was confirmed in November, months after the jeweler split from her ex-husband, “Vampire Diaries” actor Paul Wesley. Wesley and de Ramon were married for three years. 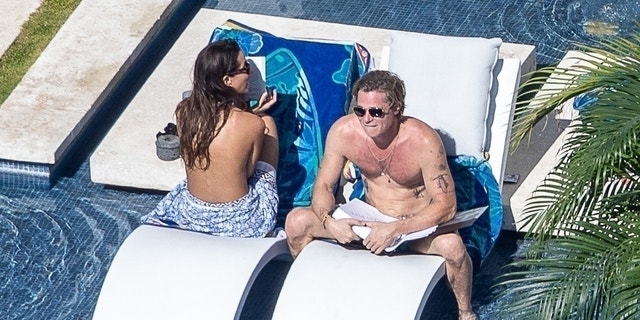 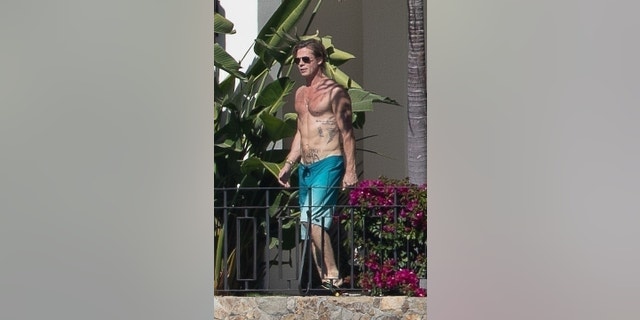 Brad Pitt shows off his tattoos while walking around the pool in a pair of blue swim trunks.
(Backgrid) 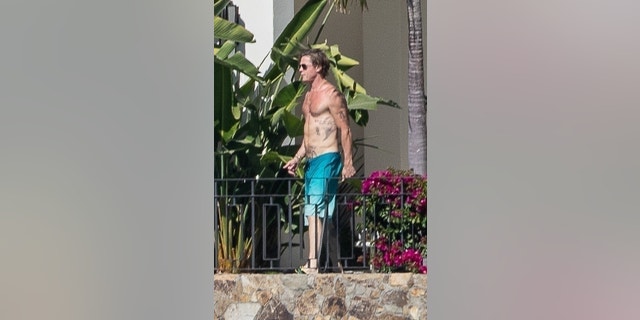 Pitt and de Ramon first sparked romance rumors while spotted on a double date with Cindy Crawford and Rande Gerber at a Bono concert.

“It’s not an exclusive relationship,” a source close to Pitt told People magazine at the time. “Ines is cute, fun and energetic. She has a great personality. Brad enjoys spending time with her.”

Pitt may have even more time for love in his life after he recently sold a 60% majority stake of his production company, Plan B Entertainment, to the French group Mediawan for $300 million.

“Brad has decided that he wants to live a peaceful life going forward and is deciding what ‘semi-retirement’ looks like for him,” a source told Page Six.

Ines de Ramon left her top inside while tanning with beau Brad.
(Backgrid)

“One thing he’s decided is that he will likely continue acting,” the source revealed, before cautioning that Pitt likely will step away from other business ventures.

Pitt launched a genderless skin-care line, Le Domaine, last year, and now owns, Château Miraval, a lucrative winery in the South of France at the center of his contentious divorce battle.

“While Brad has put a lot of time into the various [businesses based out of the French estate, Chateau Miraval, he bought with Angelina Jolie], and his other interests like architecture, he is absolutely committed to his film career,” an additional insider shared. “He is not leaving Hollywood.” 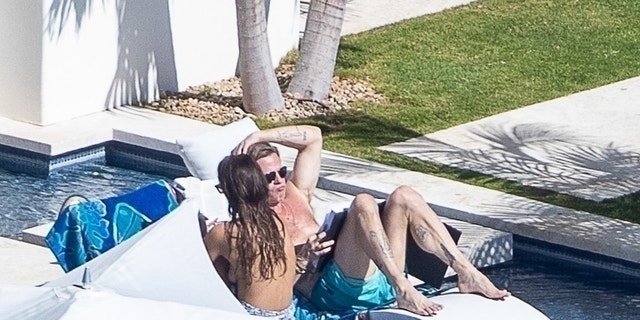 Another source alleged a slightly different narrative for Pitt, telling Page Six, “He is considering leaving Hollywood and moving to France and doing his vineyard and art and making furniture … He just wants to live in peace.”

Plan B has a number of projects in the works, but Pitt’s next big film is an as yet untitled flick about Formula 1 racing.