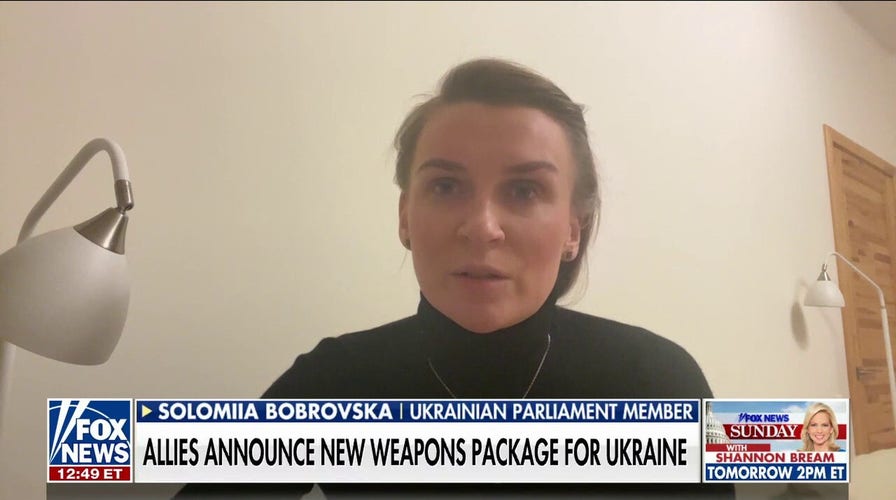 Ukraine’s ‘solution will be found on the battlefield’: Solomiia Bobrovska

Former British Prime Minister Boris Johnson paid a surprise visit to Ukraine Sunday where he met with President Volodymyr Zelenskyy and pledged his country’s support in its war against Russia.

Boris, who was prime minister when Russia invaded Ukraine in late February 2022, said the U.K. “will be sticking with Ukraine for as long as it takes.” 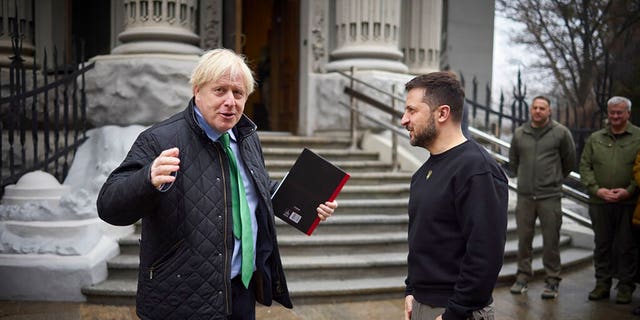 “You’re going to win and you’re going to get all the Russians out of your country, but we will be there for the long-term,” Johnson said. “And we will also want to be helping you to reconstruct.”

During his trip, the former prime minister visited Borodyanka and Bucha, the suburbs of the Ukrainian capital that has witnessed some of the most horrific atrocities of the war.

Kyiv regional governor Oleksiy Kuleba told Johnson that more than 160 residents were killed in Borodyanka during the month-long Russian occupation of the town last year, though some 60% of residents have since returned.

In Kyiv, President Zelenskyy and top officials, including the foreign minister, who lined up to personally welcome the former British Prime Minister. 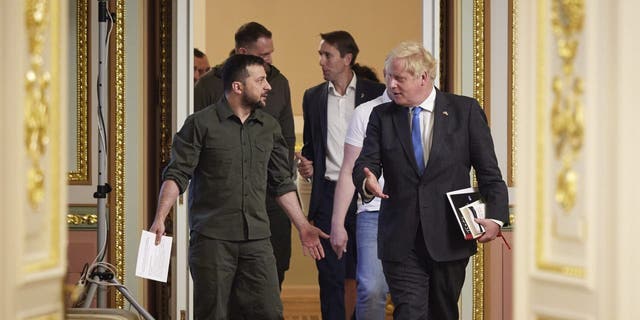 While in office, Johnson sought to position London as one of Kyiv’s top allies in the West. He frequently visited Kyiv and called Zelenskyy frequently.

Meanwhile, Ukraine’s supporters pledged billions of dollars in military aid to Ukraine during a meeting at Ramstein Air Base in Germany on Friday. International defense leaders discussed Ukraine’s urgent request for the Leopard 2 tanks, and the failure to work out an agreement overshadowed the new commitments.

UKRAINE-RUSSIA WAR: ZELENSKYY SAYS HE CAN’T USE ‘WORDS INSTEAD OF GUNS’ AS DEFENSE CHIEFS FAIL ON TANK DEAL

“This is the moment to double down and to give the Ukrainians all the tools they need to finish the job. The sooner Putin fails, the better for Ukraine and for the whole world,” Johnson said in a statement. 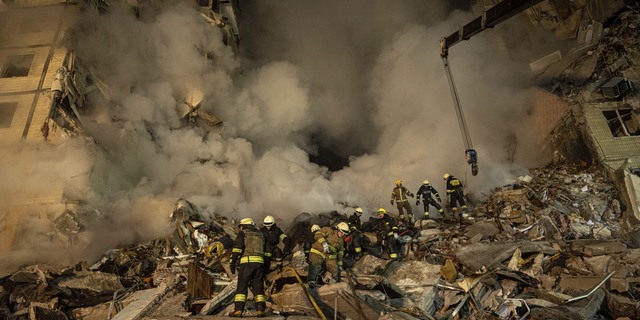 Emergency workers clear the rubble after a Russian rocket hit a multistory building, leaving many people under debris, in the southeastern city of Dnipro, Ukraine, on Saturday, Jan. 14.
(AP/Evgeniy Maloletka)

The last week was especially tragic for Ukraine even by the standards of a brutal war that has gone on for nearly a year, killing tens of thousands of people, uprooting millions more and creating vast destruction of Ukrainian cities.

A barrage of Russian missiles struck an apartment complex in the southeastern city of Dnipro on Jan. 14, killing at least 45 civilians. On Wednesday, a government helicopter crashed into a building housing a kindergarten in a suburb of Kyiv. Ukraine’s interior minister, other officials and a child on the ground were among the 14 people killed.

Zelenskyy vowed Sunday that Ukraine would ultimately prevail in the war.