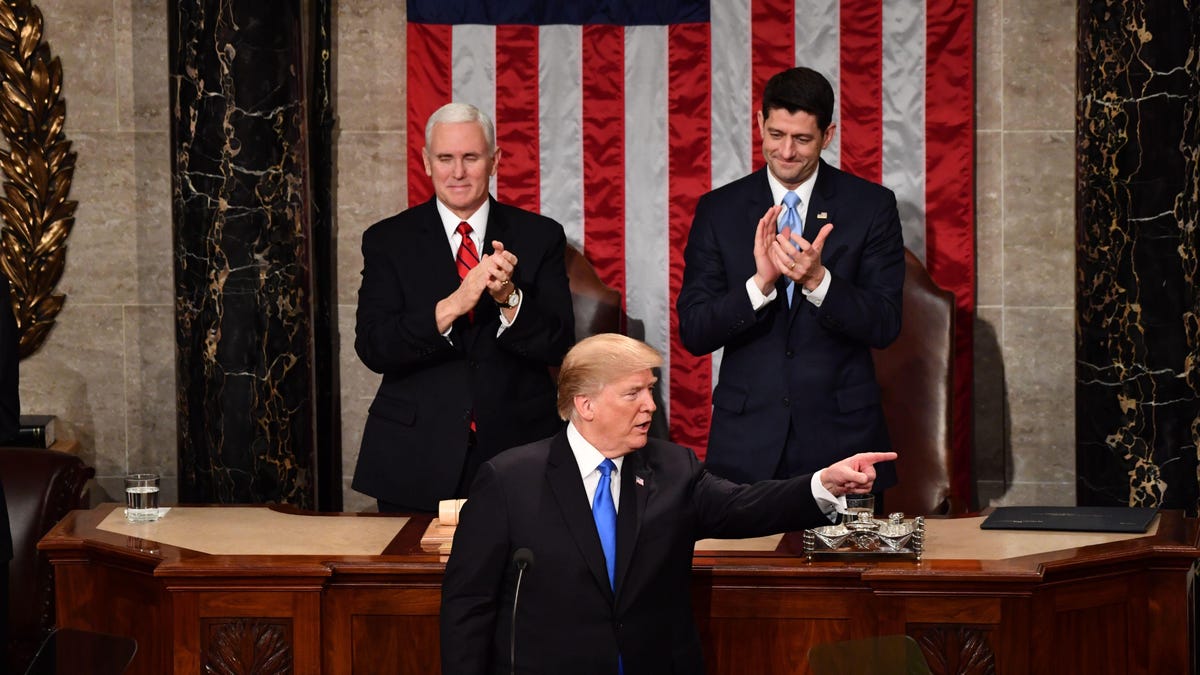 US Vice President Mike Pence (left) and Speaker of the US House of Representatives Paul Ryan (right) applaud US President Donald Trump before the State of the Union address at the US Capitol in Washington, DC.
Nicholas Kamm/AFP/Getty Images

Aside from a reference to Apple, President Donald Trump stayed away from any talk about technology in his first State of the Union address.

The first half of Trump’s speech Tuesday focused on what he considers successes his administration has had during his first year in office. Top of that list was the passage of what Trump referred to as the “biggest tax cuts and reform in American history,” which he said has already spurred businesses to invest in the US.

He specifically called out tech giant Apple for its promise to pump more cash into the US and create new jobs.

“Since we passed tax cuts, roughly 3 million workers have already gotten tax cut bonuses — many of them thousands of dollars per worker,” he said. “Apple has just announced it plans to invest a total of $350 billion in America, and hire another 20,000 workers.”

That $350 billion figure includes $30 billion in new investments over the next five years, an expected $38 billion in taxes paid on overseas revenue brought into the US, spending with US suppliers and manufacturers, taxes on Apple employees’ wages and sales tax that consumers pay on Apple products.

While Trump’s speech touted the $1.5 trillion plan to overhaul US infrastructure, he didn’t explicitly call out any money to expand broadband. Instead, Trump outlined spending on traditional infrastructure, like roads, bridges and highways.

“We will build gleaming new roads, bridges, highways, railways and waterways all across our land,” he said.

He also talked about cutting through red tape to get projects built more quickly.

“America is a nation of builders,” he said. ” We built the Empire State Building in just one year — isn’t it a disgrace that it can now take 10 years just to get a permit approved for a simple road?”

But there was no specific mention of getting wireless towers deployed more quickly or ensuring broadband gets to the hardest to reach areas of the country. He also made no mention of an out-of-the-blue proposal that surfaced earlier this week to build a 5G wireless network.

That said, Trump has called out the need for expanding broadband before. Earlier this month, he signed an executive order aimed at making it easier for companies to deploy high-speed broadband networks in rural areas. Still, Trump’s proposal doesn’t offer new funding to promote broadband deployment in rural areas. Instead, the administration is focused on establishing policies to “get government out of the way” as companies look to deploy fiber links and high-speed wireless technologies to serve these areas.

The reason is simple. In sparsely populated areas, it’s not economical for private industry to deploy infrastructure. It’s not a new problem or suggested solution. The Obama administration made similar suggestions two years ago.

Expanding broadband has bipartisan support. At a House Energy and Commerce Committee hearing earlier Tuesday lawmakers on both sides of the political aisles considered some 25 bills before the committee to help expand broadband. But while they agree that more access is needed, they disagree about how to pay for it. Democrats say more federal dollars are needed to pay for infrastructure in expensive areas to cover.

That’s likely to be the complaint Democrats have with Trump’s broader infrastructure package. A draft of the proposal leaked last week showed that 80 percent of the funding for these projects would come from state, local and private investment. The federal government is only expected to spend up to $200 billion in federal money over 10 years. The difference is expected to come from states, local governments and the private sector.

Democrats say that’s not nearly enough from the feds. Senate Minority Leader Charles Schumer of New York and other Senate Democrats have called for $1 trillion in federal investment.