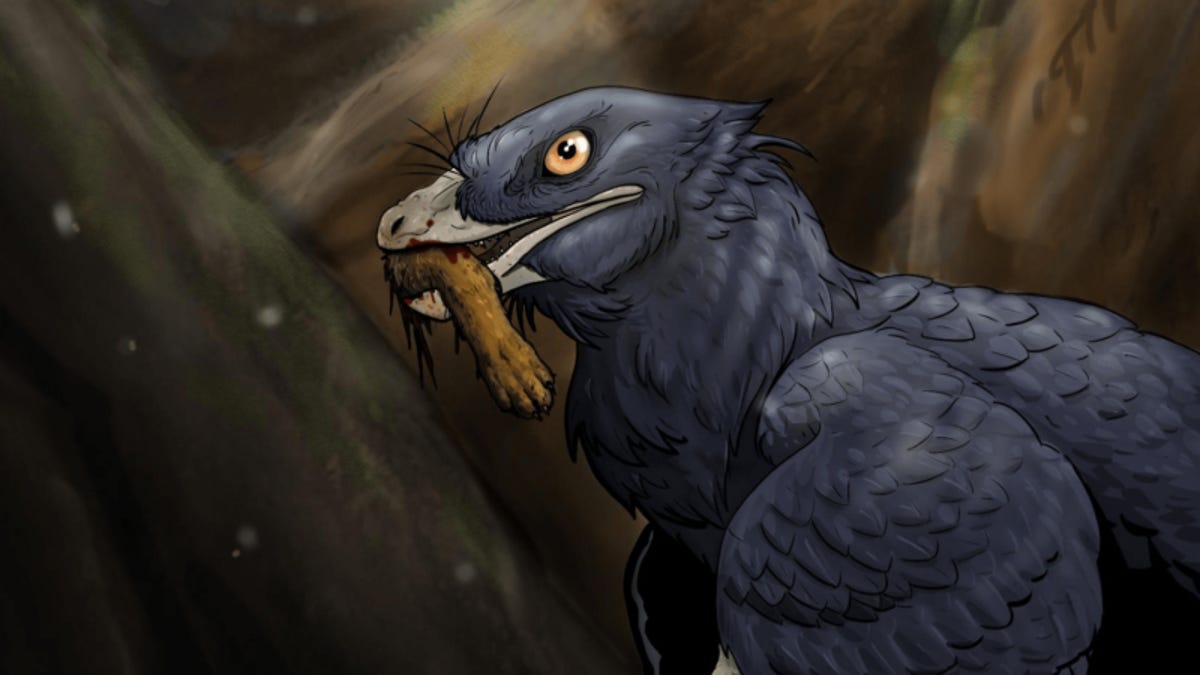 An artist’s illustration of the Microraptor about to down a mammal’s foot.
Ralph Attanasia

The surprising lunch of a cat-size dinosaur has been discovered in a 120 million-year-old Microraptor fossil. Though the fossil was first described in 2000, it hid an intriguing and historic secret: A re-analysis of the fossil found the foot bones of a mammal within the raptor’s rib cage — the first evidence of a dino dining on a mammal.

The find, described in the Journal of Vertebrate Paleontology on Tuesday, builds on the previous research of the Microraptor zhaoianus fossil, discovered in the Jiufotang Formation in western China. That fossil is missing the middle portion of its body, but the rib cage is visible and, within, the bones of a tiny right foot, less than half an inch in size, were perfectly preserved.

Microraptors were three-toed, carnivorous dinosaurs that occupied the trees of ancient Earth and are among the smallest dinosaurs discovered. Fossils of different microraptor species show evidence of long feathers on each limb, which may have used for gliding.

As you might expect, being eaten doesn’t typically result in very well-preserved fossil remains. All that biting and chewing, plus digestion, typically leaves few traces of a meal. However, scientists have a fairly good idea of the microraptor diet thanks to fossils with undigested remains in the stomach.

A bird, a fish and a squamate — the class of animals containing lizards and snakes — have all been previously found, but the new find helps paint a more complete picture of what was going down the gullet during a prehistoric degustation.

“It’s so rare to find examples of food inside dinosaurs so every example is really important as it gives direct evidence of what they were eating,” said David Hone, a paleontologist at Queen Mary University of London and first author on the new study.

While scientists can tell a foot ended up in the microraptor’s stomach, they’re not sure which species it belonged to. The slender digits are similar to tiny, extinct, possum-like mammals known as Sinodelphys or the more mouse-like Eomaia. However, the digits aren’t quite long enough to be either of these species.

Another outstanding question is whether Microraptor preyed on the mammal or if it merely scavenged the foot. That’s impossible to say with this fossil, but some scientists have suggested the microraptor’s feathered limbs may have allowed the species to glide from branches and to the ground to prey on land-dwelling species. The size of the mammal’s foot suggests the creature would have been in the size range expected for microraptor’s prey.

The astounding fossil builds on previous evidence these smaller three-toed dinosaurs would feast on whatever was around — it’s even possible they may have even eaten plants on occasion.