Wordle Is Great, but Waffle Is the Spinoff You Should Be Playing 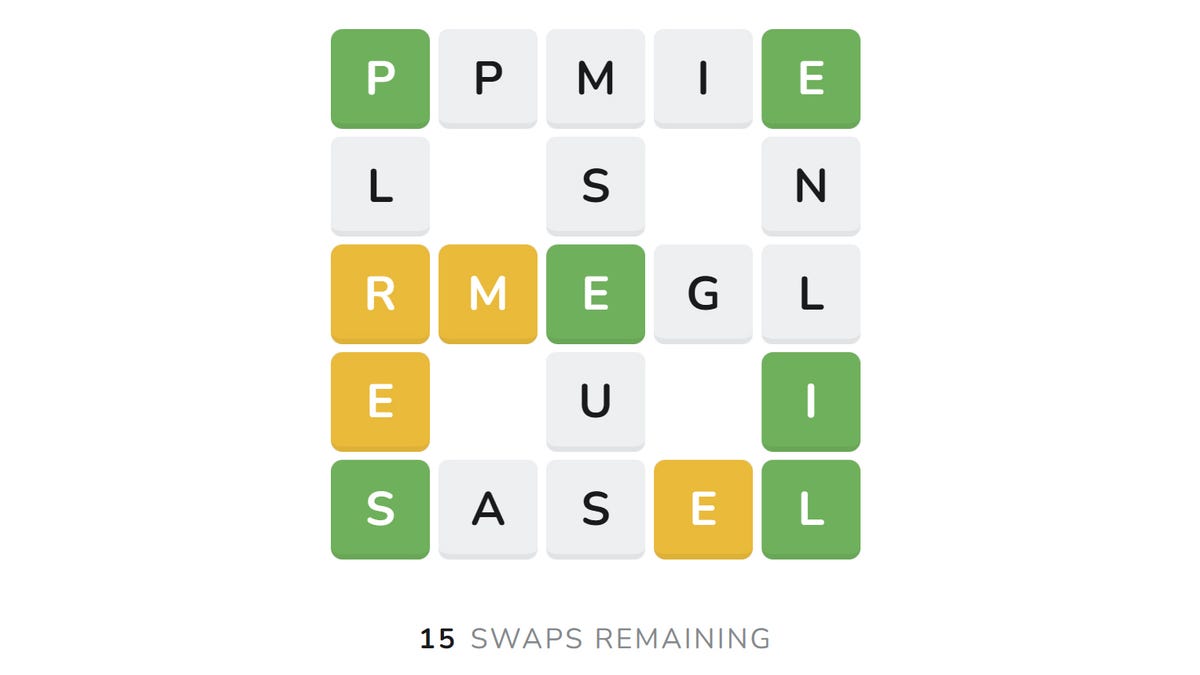 It’s like Wordle in the shape of a waffle.
wafflegame.net

2022 is still the Year of the Wordle. Somehow it has maintained its hold on the public consciousness and over Google’s all-seeing algorithm. I still see tweets, every morning, of people doing the Wordle. In the wake of its huge success there have been dozens — maybe even thousands — of Wordle spinoffs covering everything from geography to music to math, all replete with their own little green and yellow squares ready for posting to social media.

I used to wake up, roll over, open Wordle, mess around until I got the day’s word, then flip over to Worldle and guess a country, skip over to Heardle so I could guess the day’s song, open a new tab to get through Quordle (solving four Wordles at once) and then, of course, hit Wordle (BTS Version). OK, maybe not that last one.

After all that, it’s usually 10:30 a.m. The bite-size, web-based delights were absolutely tanking my morning productivity.

I started getting pretty tired of seeing new Wordle spinoffs and clones. Some were half-hearted. Others were plain ripoffs seeking a quick buck. The truth is the spinoffs never really captured the magic of the original. Wordle felt fresh and new and like a bright light during a pretty dark time.

Everybody was playing Wordle because Wordle gave us 15 minutes in every day to ourselves. Sure, we wanted to beat our mates and show off our Galaxy Brains and, yeah, we wanted to avoid losing our streaks, but it was more than that. It broke up our never-ending doomscrolling with cute little emoji grids for a while there. It ruled! It’s still the best. All hail. I’ll be playing it for the next five years.

At least, that’s what I thought. Until I came across Waffle in early 2022. Wordle is long dead to me. Waffle carries on.

Waffle is a word game, just like Wordle. It was created by James Robinson who, according to his Twitter bio, is a “developer of things.” James, you developed the hell out of this one, mate.

Waffle will feel instantly familiar to anyone who has played Wordle (so, like, everyone reading this piece). It’s got the yellow squares and the green squares. It’s free to play. You can easily share the neat results grid on social media with your friends. The difference? Well, first of all the grid is shaped like a waffle — hence the name.

Swapping letters is the bread and butter of Waffle.

Morphing Wordle into a waffle grid is game changing. (I am so sorry.)

Instead of trying to guess the day’s five-letter word by eliminating what it might not be, Waffle throws six words at you at once. Right off the bat, that makes it five times better than Wordle. That’s just science.

But it’s what it does with its grid that makes Waffle a standout spinoff. It gives you all the letters you need to make those words. It’s your job to rearrange them — swapping them out one by one — until you get to the six words of the day.

However, you only get 15 swaps per day.

It can feel a little overwhelming and confusing at first but after a few swaps, you start to see the words coming together. You can try to swap tiles into their exact positions, rather than guess. It’s really this limited number of swaps that makes Waffle a challenge and adds an extra layer of depth.

Wordle strategies mostly seem to be variations of “pick a good starting word with vowels” and there are a lot of people who seem to choose ADIEU or ROATE to kick things off. But once you’ve got a couple of good vowels in place or you’ve been lucky enough to strike enough letters down, you’re almost guaranteed a win.

With Waffle, even though you have 15 moves per day, each puzzle is solvable in just 10. The reward is a higher score: Waffle uses a star system that nets you a star for each turn you have left when the puzzle is complete.

The first few days I played, I struggled to keep under 10 moves. I was routinely getting two or three stars. Soon enough, I was trying to get a perfect game. This is why I’ve come to love playing Waffle in the morning and eschewing all my Wordle spinoffs. Getting a high score in Wordle — a two- or three-guess game — just feels like pure luck. But a high score in Waffle feels earnt.

Also, Robinson seems to be having fun and iterating it since dropping the game back in February. The tutorial screen seems to (secretly) include both the word “bum” and “boob,” which you aren’t going to get from Wordle overlords The New York Times, and on Waffle Day on March 25, he included a secret version of the game with a much larger grid.

I know Wordle still hasn’t been replaced. Those green and yellow grids aren’t going anywhere. But Waffle comes close to replicating the feelings I had when Wordle was fresh and new and fun and a phenomenon late in 2021 and early 2022. It might even be better than Wordle. I think it is. Maybe you will, too.