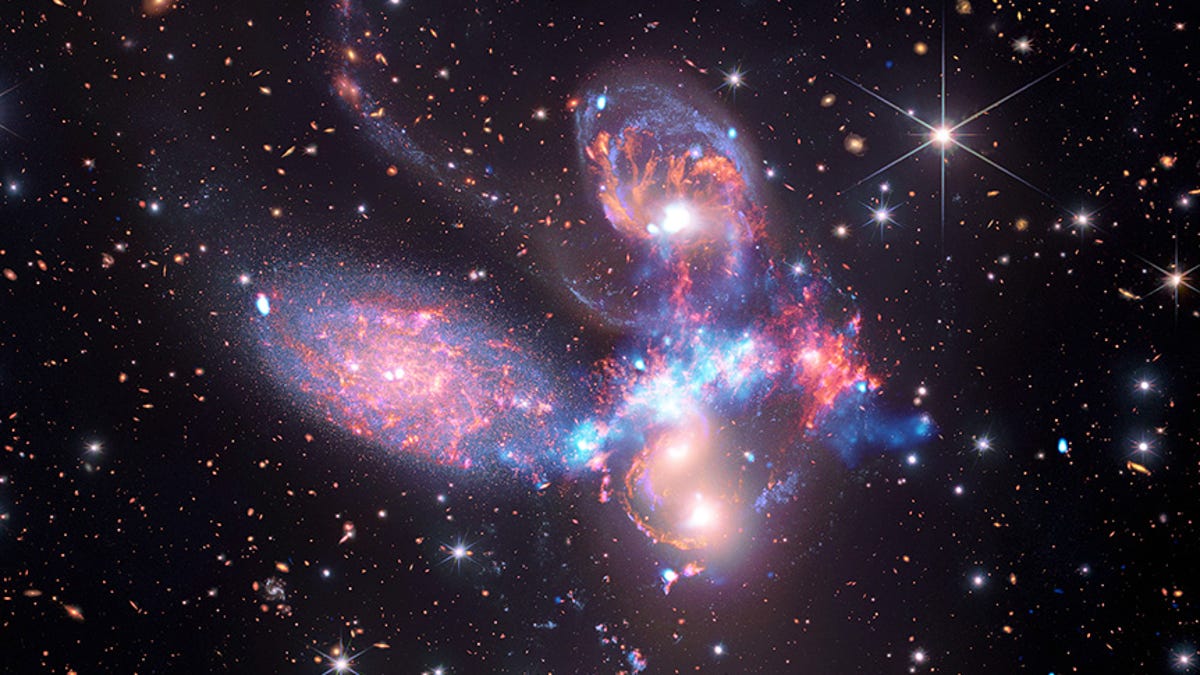 An image of Stephan’s Quintet made up of Spitzer, JWST and Chandra X-Ray observations. The blue part in the middle signifies the massive shock wave.
NASA/CXC/SAO/JPL-Caltech/ESA/CSA/STScI

Last year, when I covered the James Webb Space Telescope’s breakthrough set of cosmic images, I described a phenomenal portrait of Stephan’s Quintet with a bunch of contradictory words — which, I admit, tends to be standard practice when talking about deep space spectacles.

This gaggle of five galaxies, some of which are swirling much too close for comfort, hold a realm “fit for a fairytale universe,” I’d said. But I also couldn’t help feeling disturbed by the “terrifying” black hole lurking in the center of another sparkly haze and calling this corner of the universe an overall “frightening” one, as these galaxies are surely locked in an ultimately fatal, air-shattering dance.

And the more we learn about Stephan’s dark-angel quintet, the clearer it becomes that this section of our world is just as majestic, and intimidating, as it looks to be. During an annual American Astronomical Society press conference Monday, scientists said that further observations with the JWST and the powerful Atacama Large Millimeter/submillimeter Array, or ALMA, have revealed absolute chaos happening among these five, luminous galaxies.

First of all, one galaxy — formally named NGC 731b, also known as the “intruder” — is generating a giant shock wave, several times the size of our entire Milky Way, as it “intrudes” intergalactic space of the other four. Along the way, that utterly intense wave is causing a lot of drama because it’s kickstarting a “recycling plant” for clouds of warm and cold molecular hydrogen gas among the quintet.

“A molecular cloud piercing through intergalactic gas, and leaving havoc in its wake, may be rare and not yet fully understood,” Bjorn Emonts, an astronomer at the National Radio Astronomy Observatory and co-investigator on the project, said in a press release. “But our data show that we have taken the next step in understanding the shocking behavior and turbulent life cycle of molecular gas clouds in Stephan’s Quintet.”

And as if that wasn’t wild enough, the team also located a massive bundle of gas by the quintet, steadily breaking apart while a separate tail of warm gas forms nearby.

To sum up the latter bit, this tail is an indication of a possible baby galaxy. Yup, that’d add another character to the tumultuous sit-com at this end of the universe which, thankfully, lies between 39 million and 340 million light-years from where you’re sitting. (One of the galaxies, in the foreground, is significantly closer than its dance partners). 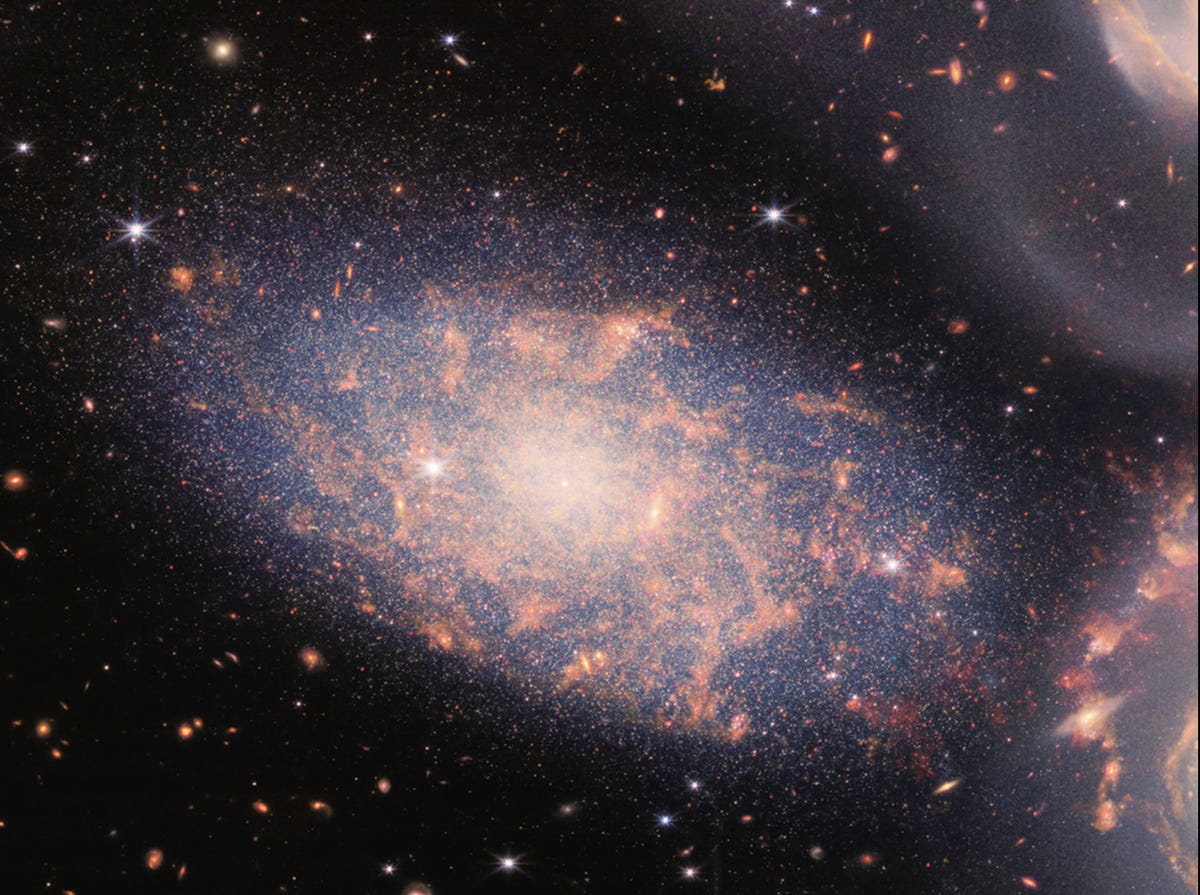 A close-up of a star-spotted galaxy in Stephan’s Quintet, courtesy of NASA’s JWST.

The root of chaos

Shock waves, like the one punching through the vicinity of Stephan’s Quintet, are generally produced in front of an object traveling faster than the speed of sound, through some sort of gaseous medium.

In this case, NGC 731b is the object, ripping through space’s gassy fabric at a stunning 800 kilometers per second (nearly 500 miles per second). “At that speed,” per the release, “a trip from Earth to the Moon would take just eight minutes.”

“In 2006, our team, using Spitzer, discovered a remarkable fact,” Philip Appleton, an astronomer at Caltech and co-author of a study on the findings, said during the conference.

Within the shock wave, the researchers found a huge amount of certain hydrogen molecules radiating in the infrared, mixed with X-ray emissions typically expected to remain pure when stemming from such phenomena. “These molecules would normally not survive shock waves traveling faster than 30-50 kilometers per second,” Appleton explained.

So, intuitively, the team wondered, what’s going on here?

Which brings us back to the major disarray I was on about earlier.

Basically, the team realized the gaseous medium this shock wave is plunging into is kind of “clumpy.” And these clumps, Appleton explained, seem to be getting shattered into tinier clumps, called cloudlets, as the shock propagates through space — and those cloudlets are the source of the questionable hydrogen emission. Then, Appleton said, all that hydrogen joins the violent shock wave itself.

In other words, hydrogen in the region seems to be getting “recycled” through both warm and cold gas surrounding the shock wave. And in 2006, the team detected all that recycled hydrogen while tracking the wave.

“This is important because molecular hydrogen forms the raw material that may ultimately form stars,” Appleton said in the release, “so understanding its fate will tell us more about the evolution of Stephan’s Quintet and galaxies in general.”

Furthermore, as the shock wave passes through its clumpy obstacles, all this violent activity creates what Appleton calls “unexpected structures” due to the whole recycling situation. One of those strange structures is essentially two cold clouds connected by a thread of warm molecular hydrogen gas. Think, high-speed bullet piercing through a cloud and forming a ring-like figure in its wake.

And the other, of course, is what appears to be the tail of a budding galaxy. 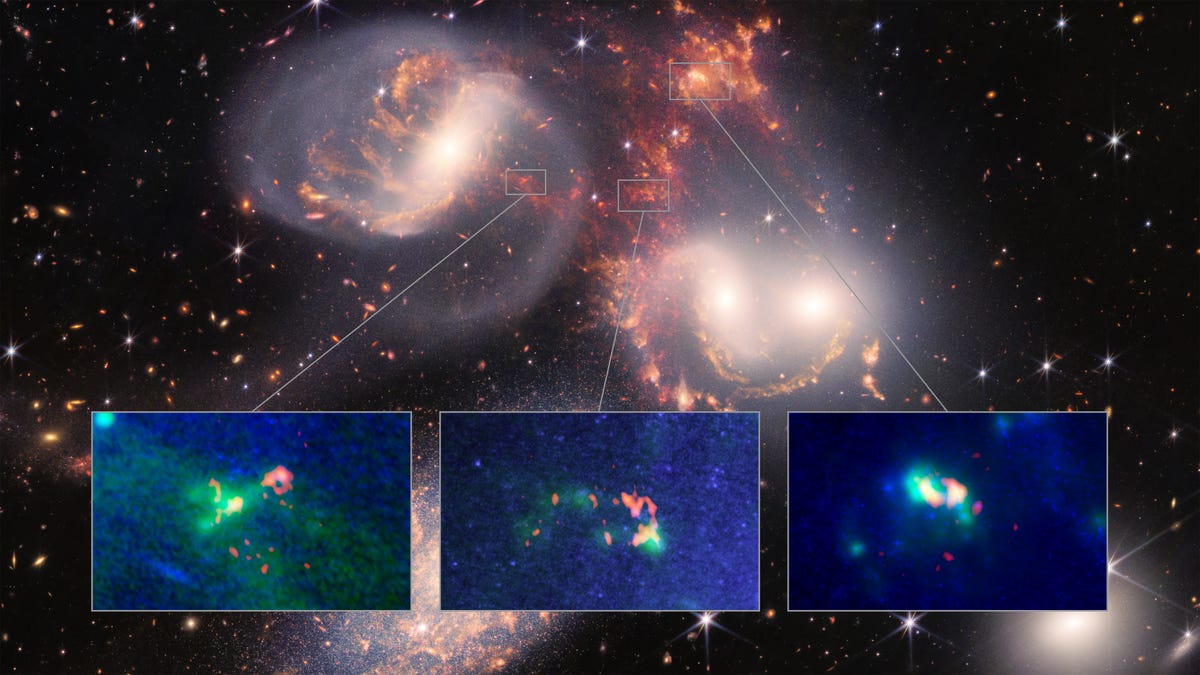 (Left): Field 6 sits at the center of the main shock wave,  recycling warm and cold hydrogen gas as a giant cloud of cold molecules is stretched out into a warm tail of molecular hydrogen over and over again. (Center): Field 5 unveils two cold gas clouds connected by a stream of warm molecular hydrogen gas characterized by a high-speed collision feeding the warm envelope of gas around the region. (Right): Field 4 reveals a steadier, less turbulent environment where hydrogen gas collapsed, forming what scientists believe to be a small dwarf galaxy in formation.

“What we’re seeing is the disintegration of a giant cloud of cold molecules in super-hot gas, and interestingly … it just cycles through warm and cold phases,” said Appleton. “We don’t yet fully understand these cycles, but we know the gas is being recycled because the length of the tail is longer than the time it takes for the clouds it is made from to be destroyed.”

Going forward, the team intends to use spectroscopic observations to trace exactly how all the gas around the shock wave is moving around. That way, it’d be possible to figure out how fast the gas is moving and how it’s getting heated up or cooled down as the shock wave pulses through the area.

This leaves us at a famous pitstop — one that most of our generation’s biggest astronomy discoveries tend to pass through.

“These new observations have given us some answers, but ultimately showed us just how much we don’t yet know,” said Appleton. “Essentially, we’ve got one side of the story. Now it’s time to get the other.”