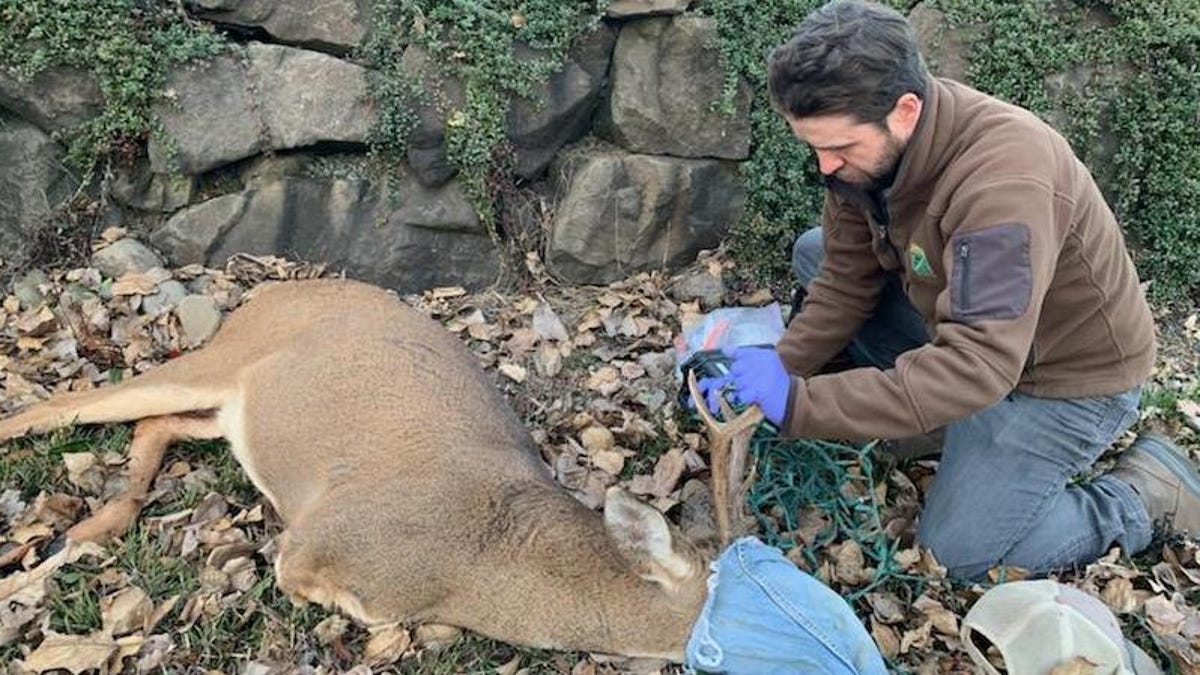 The Oregon Department of Fish and Wildlife removed holiday lights from a three-legged deer’s antlers.
ODFW

Officials from the Oregon Department of Fish and Wildlife have emerged as holiday heroes after helping an unusual deer facing a Grinch-level experience.

The buck lives in Dallas, Oregon, and has been nicknamed Tripod because it has only three legs. Recently, it needed help from wildlife officials after getting a string of Christmas lights tangled in its antlers. “ODFW darted it and removed the lights,” the agency tweeted this week.

This 3-legged buck nicknamed Tripod by Dallas, Ore. residents was not run over by a reindeer but got tangled up in lights while decking the halls like another buck recently. ODFW darted it and removed the lights. The leg wound is fully healed and the deer seems to get around OK. pic.twitter.com/x3m79Egt7Q

ODFW posted several photos of the deer. One shows it standing with the lights dangling from its head. Another shows it tranquilized with a denim covering over its face as a wildlife official removes the lights from the antlers.

The buck’s predicament wasn’t an isolated incident. In November, ODFW officials assisted a different deer with the same problem.

Alright all you Clark Griswolds. We know you like decorating for Christmas but this is just too far. Thankfully this buck was freed of its decorations yesterday and went on its merry way. pic.twitter.com/nbrnvxvESG

“Bucks rub their antlers on trees, bushes and other objects in September to get rid of velvet and during the rut from October into mid-December to mark territory and show dominance against other bucks,” ODFW wrote on Facebook. “If you have deer frequenting your property, hang lights higher up in trees where bucks cannot get into them.”

The two bucks might’ve gotten feel-good endings, but it isn’t always a happy story for animals that get caught on items ranging from light strings to hammocks to volleyball nets. ODFW responded to comments about bucks and lights on Facebook, noting that some animals don’t survive if they get too hung up and are unable to eat, drink or escape predators.

The three-legged buck’s Christmas story highlights a potential downside of festive decorations, but it’s worth celebrating Tripod’s resilience and the humans who helped him out.