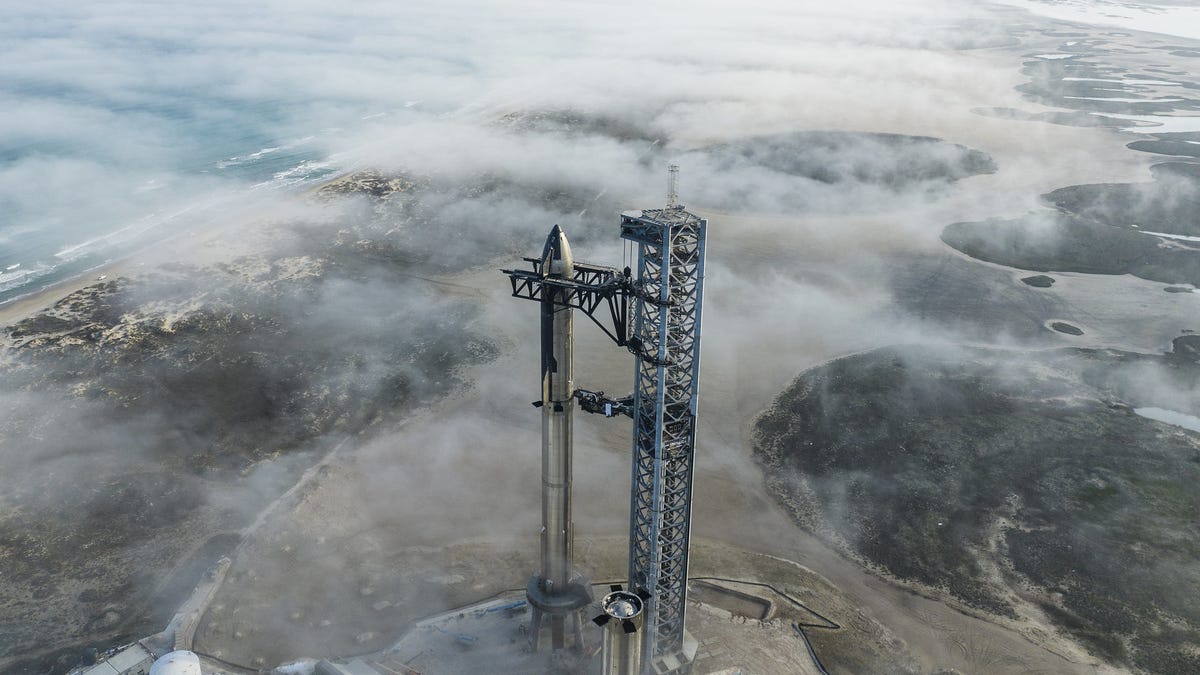 A magical, misty moment in Texas as Starship poses on the launchpad in January 2023.
SpaceX

After over a year and a half of waiting, it’s clear Starship’s first trip to space is getting really close and that the next step involves a whole lot of fire.

The rocket that Elon Musk aims to use to send astronauts to the moon and many more humans to Mars could make its first orbital flight within weeks, and SpaceX is now going through some of the final items on its checklist to prepare.

Reports and action from the company’s Starbase rocket development facility in Texas point toward a possible static firing of Booster 7, an early prototype of the Super Heavy booster designed to push Starship out of the atmosphere.

On Monday, local residents reported they’d been asked to a evacuate for a potential “wet dress rehearsal,” which would see SpaceX load propellant into the rocket and run through the countdown, simulating everything right up through blast-off without actually lighting up the engines.

Change in road closure and safety protocol is used again for today’s closure. Closed shortly before 7am, everyone is asked to evacuate for WDR test. #NotFakeNews #StarbaseClosed #1stNeighbor #StillinMyBackyard #NoOfficeFacilities 🤔📷🚀 GoodLuck @SpaceX pic.twitter.com/kzUYsrcpey

If all goes well with the wet dress rehearsal, we may see the static firing as soon as later this week.

A static firing will see the booster secured to a test stand so it can’t go anywhere while its engines are lit up briefly to test them and gather data on how they perform in preparation for launch. SpaceX conducted test firings of Booster 7 last year, but only with a fraction of the engines it’s designed to carry. This will be the first time a fully loaded Super Heavy with all 33 engines is ignited.

SpaceX did not immediately respond to a request for comment.

A successful static firing could indicate SpaceX is getting near the end of its checklist of things that need to happen before the Federal Aviation Administration issues the company a license to launch. We may finally see Starship leave the planet as soon as late February or early March, according to Musk.

SpaceX Starship is preparing for its first orbital flight

Starship last flew in 2021 in a series of high-altitude flights that saw early prototypes of the craft, sans Super Heavy booster, skim the atmosphere and come back for a landing attempt. The next launch will be an orbital flight that sees Super Heavy launch Starship to orbit before separating and splashing down in the Gulf of Mexico. SpaceX has also mentioned the possibility of landing on a modified oil rig or using large mechanical arms on the launch tower to “catch” the returning rocket.

Meanwhile, Starship will continue on to orbit for a short trip to space before splashing down off the coast of Hawaii.

If all goes well, 2023 will see more Starship tests as SpaceX prepares to assist NASA and its Artemis program by eventually sending cargo and astronauts to the moon later this decade.