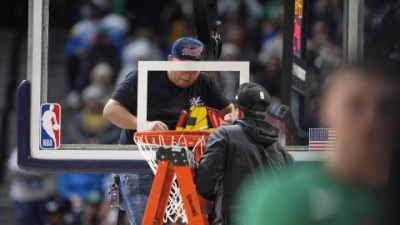 Workers struggle to replace the rim after it was bent during a dunk by Boston Celtics’ Robert Williams III.

Despite the Denver Nuggets beating the Boston Celtics in a clash of the NBA’s Eastern and Western conference leaders on Sunday, all the talk after the game was about a bent rim.

The match-up was overshadowed by a bizarre 35 minutes, according to ESPN, when officials worked frantically to level one of the rims, which appeared to have been bent out of line by the Celtics’ Robert Williams III.

The 25-year-old had earlier hung onto the rim after slamming home a powerful dunk with 8:06 left in the fourth quarter.

During a timeout with 6:43 left on the clock, workers inside the Ball Arena were summoned the fix the issue.

At first, one technician was deemed enough but, after he failed to level it sufficiently, multiple people, ladders and spirit levels were deployed during a farcical scene.

“I didn’t know I did it until my teammates started blaming me, to be honest,” Williams told reporters after the game. 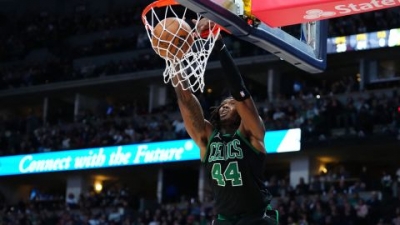 Williams hung onto the rim after his powerful dunk.

With almost 20,000 fans inside the arena growing agitated and with bemused players running across the court to stay warm, Denver’s mascot Rocky the Mountain Lion did its best to keep spirits up.

At one point, the mascot got a small ladder and pretended to fix the rim on the other side of the court.

Eventually, after 35 minutes of work, the rim was deemed level and play was able to resume after both teams had a short warmup.

After the break, the Nuggets kicked on to take the 123-111 win, inspired by MVP candidate Nikola Jokic who finished on 30 points, 12 rebounds and 12 assists.

However, despite the lengthy delay, Celtics shooting guard Jaylen Brown said the rim still looked slightly bent to the left.

“They spent all that time trying to fix it, but when we came back, it still looked like it wasn’t even level, in my opinion. So we just wasted all that time,” he told reporters.

“That has an effect on the game. That’s how injuries and stuff happen. Luckily, that didn’t [happen], but that wasn’t good. That whole process was handled poorly, in my opinion, and that had an effect as well. But luckily nobody got hurt.” 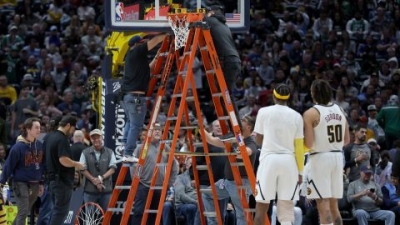 The crowd grew restless as the works took longer than expected.

‘One of the more weird games’

Brown, who finished on 30 points for the Celtics, also said the delay had kicked his team’s momentum.

“We were trying to get it going, but you’ve got to give credit to Denver. They came out, they played well, their second unit played well,” he told reporters.

“They just played well throughout the whole game. So you have to give credit to Denver, but definitely one of the more weird games I’ve been a part of in my whole career.”

Meanwhile, Nuggets coach Michael Malone could see the funny side of the situation, perhaps helped by his team’s victory on the night.

“There’s a joke in there: How many guys does it take to fix a rim in an NBA game?” he told reporters.