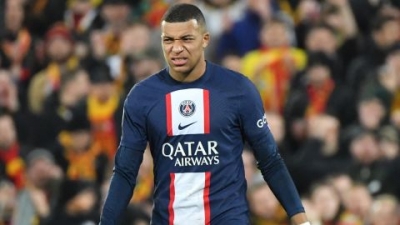 Kylian Mbappé failed to score as PSG lost to Lens in Ligue 1.

Paris Saint-Germain suffered a first defeat since March as the French champion lost 3-1 against Lens on New Year’s Day.

PSG was without Lionel Messi – still absent following Argentina’s World Cup victory – and Neymar – who was banned after receiving a red card against Strasbourg – for Sunday’s top-of-the-table game in Ligue 1, which marked the team’s first loss in 32 games.

Przemysław Frankowski opened the scoring after five minutes for the home side when Gianluigi Donnarumma’s save fell at his feet, but PSG hit back soon after through Hugo Ekitiké’s close-range finish.

Loïs Openda regained the lead for Lens midway through the first half as he dodged a sliding challenge from Marquinhos and managed to get a shot under Donnarumma to make it 2-1.

Then at the start of the second half, Openda helped to complete the victory with a smart backheel to put Alexis Claude-Maurice through on goal.

The result means Lens remains unbeaten at home this season and moves within four points of PSG at the top of Ligue 1. 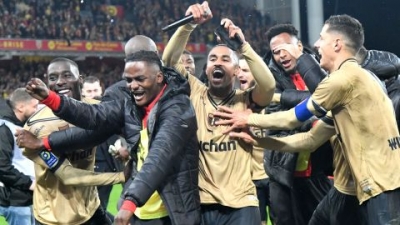 Lens players celebrate after their victory against PSG.

“We made far too many mistakes against a Lens side that deserved their victory,” said PSG coach Christophe Galtier.

“Even if we tried to fight back, we had a chance to make it 3-2, but for the first time this season, we completely lost our organization,” he added. “Why? I’m not sure, but we will talk with the players concerned and look at the different areas of our play.”

Despite drawing 0-0 against Nice on Thursday, Lens is unbeaten in the past seven league games as it looks to gain ground on PSG.