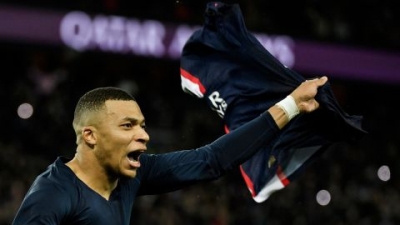 Kylian Mbappé celebrates after scoring a last-minute penalty for PSG in his first match since the World Cup final.

Just 10 days after suffering disappointment in the World Cup final, Kylian Mbappé rescued Paris Saint-Germain with a last-gasp penalty as his side beat RC Strasbourg 2-1 in Ligue on Wednesday.

Mbappé, who had ended up on the losing side against Argentina in Qatar 2022’s showpiece final despite scoring a hat-trick, didn’t seem to suffer any ill effects in his first match for PSG since the World Cup.

The 24-year-old stepped up to score the winner from the penalty spot in the 96th minute, with virtually the last kick of the game.

Marquinhos had given PSG a first-half lead but the defender then inadvertently scored an own goal after the break.

With hopes of a win fading, Mbappé used his speed and movement to get in behind the Strasbourg defense before being clumsily brought down from behind.

With Messi yet to return from celebrating his World Cup victory in Argentina, Mbappé converted the penalty himself to move PSG eight points clear at the top of Ligue 1.

Mbappé’s goal also saved Neymar Jr.’s blushes after the Brazilian was sent off in humiliating circumstances earlier in the match.

Neymar was booked twice in as many minutes, the second for a dive in the Strasbourg box. The 30-year-old Brazilian international threw himself to the ground despite no contact from the defender, as he had done earlier in the match. 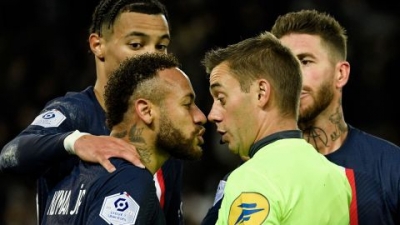 It was testament to Mbappé’s mentality that he was back winning games for PSG just over a week since arguably the biggest disappointment of his career.

France was beaten by Argentina in arguably the greatest final in World Cup history despite Mbappé’s heroics at the Lusail Stadium.

Fans inside the Parc de Princes welcomed Mbappé back by singing his name throughout Wednesday’s match and the superstar is keen to push on with the rest of the season.

“It makes you feel good. I thank the fans,” he told PSG TV after Wednesday’s match.

“When you come back from a situation like what I went through at the World Cup, it’s always heart warming to know that you’ve come home and it really makes you happy.”

Messi is not expected to return from his celebrations until after PSG’s next league match against Lens on Sunday.