President Joe Biden at COP27: 5 Things You Need to Know 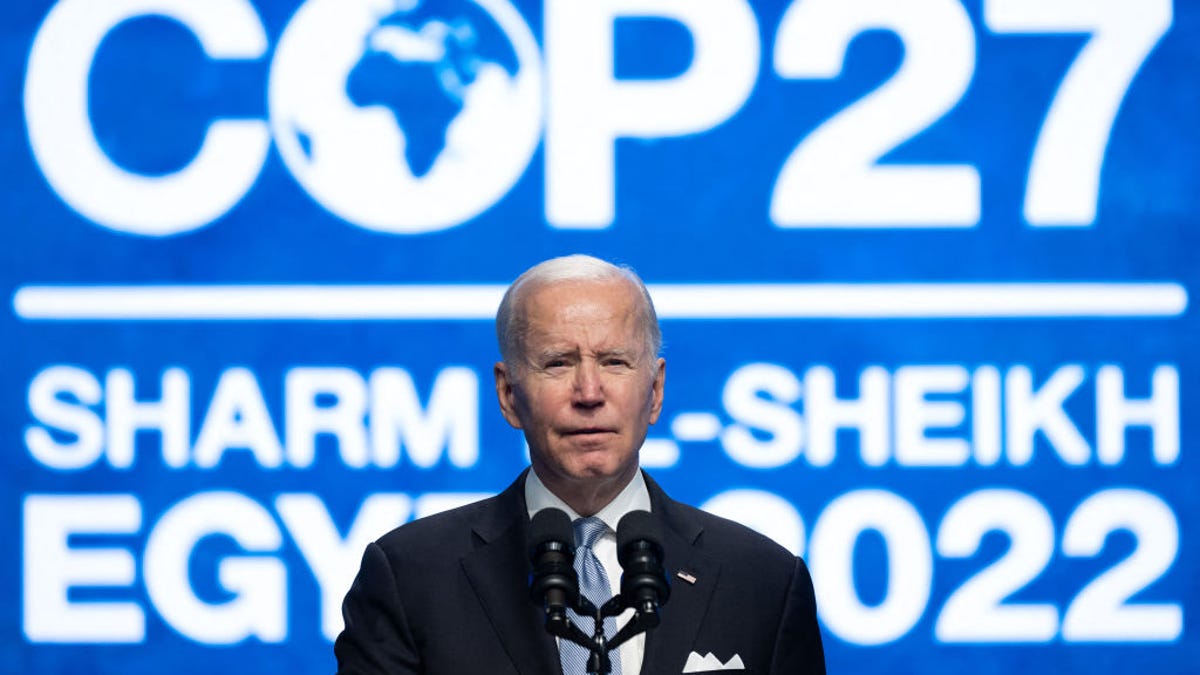 President Biden was in Egypt for just one day.
Saul Loeb/AFP via Getty Images

President Joe Biden made a flying visit to Sharm el-Sheikh, Egypt, on Friday to attend the world’s most important climate talks: COP 27.

With the impacts of the climate change being felt more keenly than ever through disruptive and destructive weather events, the COP27 summit is an opportunity for the world’s leading voices on climate to gather and make joint decisions about how to tackle this human-made global crisis. The impacts of these decisions will be felt the world over — from the new jobs that are created in renewable energy, to fewer negative health impacts and more economic stability. At least, that’s the idea.

Biden missed the world leaders summit portion of the talks — the bit he would usually attend — at the beginning of the summit due to the US midterm elections earlier this week. But he flew in on his way to Asia, where he will attend the G20 summit, among other engagements. It was a brief trip, but an important one.

The US is the highest historical emitter of any country in the world, and its record on climate action is far from flawless. Last year, President Biden attended COP26 with a lot of apologizing to do to his fellow leaders after his predecessor Donald Trump pulled out of the climate-focused Paris Agreement, which he immediately rejoined when he took office. This year, he is back to prove that he meant it when he said the US is committed to tackling the climate crisis.

Here’s what you need to know about his brief few hours in Egypt.

Biden met with the Egyptian president

One of the things Biden made time for while he was in Sharm el-Sheikh was a meeting with Egypt’s president, Abdel-Fatteh el-Sisi. They talked about a number of subjects, including the US-Egypt strategic partnership and their defense partnership.

According to a press briefing on the meeting, Biden “raised the importance of human rights and respect for fundamental freedoms” with el-Sisi. This vague description of their conversation may come as a disappointment to those who were hoping Biden might take the opportunity to call upon el-Sisi to release one of Egypt’s most famous political prisoners, Alaa Abdel-Fattah.

Earlier this week, the leaders of the UK, France and Germany asked el-Sisi to release Abdel-Fattah, a dual British-Egyptian citizen who is in prison for sharing a Facebook post and is on a food and water strike. Activists were hoping Biden might succeed where the others failed, but that appears not to be the case.

Instead, during his speech shortly after the meeting, Biden announced that the US, along with Germany, is investing $250 million in resources to unlock Egypt’s clean energy potential.

His visit was the subject of several protests

Even before he arrived at COP27, activists took aim at Biden. On Friday morning, Fridays For Future, the youth organization most closely associated with Greta Thunberg, held a climate strike calling out the US for spending money on African fossil fuels.

Today, @POTUS arrives at #COP27  – @JoeBiden will you finally SHOW US THE MONEY?

The US spent $9B on fossil fuels in Africa since Paris Agreement. Joe, you CAN pay for #LossAndDamage ⚖️

We need climate reparations! This is the MOST IMPORTANT QUESTION this week. Join me & ask! pic.twitter.com/KMI0pKaYS8

Later that same day, Biden came face to face with protesters who chanted at him about paying up for loss and damage — that is, compensation for the victims of the climate crisis living in the most vulnerable countries.

Even when he was speaking, protesters managed to interrupt his speech — although he seemed unfazed. Later on, activists expressed their disappointment that he didn’t mention loss and damage, which is one of the most high-profile issues at COP27, in his speech.

President @JoeBiden @POTUS came here, stood here, and left in 20 minutes. He told a beautiful speech. Room was full of claps. People appreciate his visit to #COP27 but everyone seems forgot why we’re here. He didn’t mentioned even a single word on core agenda of #LossAndDamage. pic.twitter.com/F8nCwvkSax

He called out Russia for making things worse

One issue that did come up in Biden’s speech was the subject of Russia, which has been a part of many conversations at COP27 this week.

Biden linked Russia’s war in Ukraine with food shortages and spikes in energy prices the world over. He made the point that Russia’s war only enhances the urgency of the need to double down on climate commitments and transition the world off its dependence on fossil fuels.

“True energy security means every nation … is benefiting from a clean, diversified energy future,” Biden said. “No action can be taken without a nation understanding that it can’t use energy as a weapon and hold the global economy hostage. It must stop.”

He positioned the US as a climate ally

Biden acknowledges that the US hasn’t always lived up to its responsibilities when it comes to playing its part in the global effort to fight the climate crisis. He also wants to change that.

“Countries that are in a position to help should be supporting developing countries so they can make decisive climate decisions, facilitating their energy transitions, building a path to prosperity and compatible with our climate imperative,” he said.

The US has announced a number of initiatives over the course of COP27 to provide international support amid climate change. These include investing in resilience to provide vulnerable countries with early warning systems to help predict extreme weather events. He also emphasized the US role in chairing the Forests and Climate Partnership, which is part of a wider push by Biden’s administration to lean into nature-based solutions to climate change.

“The best part is we don’t have to develop any new technologies,” he said. “We just have to make clear forests are more valuable when they’re preserved than when they’re destroyed. It’s that basic.”

2022 has been a great year for US climate progress

As well as rejoining the Paris Agreement, Biden has made climate central to everything his administration does, and a number of breakthroughs have occurred over the past couple of years.

At COP27 he talked about making a generational investment in the country’s infrastructure to allow the power grid to transfer more green energy. He also talked up investments in transit, rail and 50,000 electric car charging stations nationwide. He cited the Inflation Reduction Act, which he described as “the biggest, most important climate bill in the history of our country.”

“It includes less than I asked for, but a significant amount: $368 billion to support clean electricity,” he said. The Department of Energy estimates the law will reduce US emissions by about 1 billion tons by 2030.

Biden also took the opportunity to talk about something introduced only the day prior to his trip. All major federal suppliers must now disclose their emissions and climate risks and set targets for themselves that are aligned with the Paris Agreement, he said.