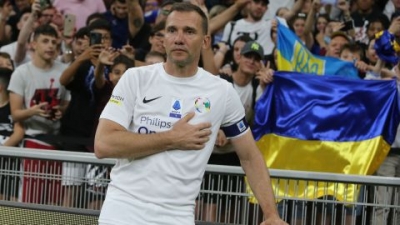 Andriy Shevchenko poses next to the Ukainian flag after an exhibition football match on May 23, 2022.

As he urges the world not to forget about those still facing imminent danger from Russian forces, Ukrainian soccer icon Andriy Shevchenko says sport has a major role to play in uniting people behind his country.

Fighting is still a daily occurrence in Ukraine with millions of people unable to return to normality having fled the country.

Since the start of the invasion on February 24, Shevchenko has been using his platform to raise awareness and money for his beloved homeland.

Like many, the former Ukraine captain and national team manager has been deeply affected by the war and says it took weeks for him to come to terms with what was happening back home.

“Personally, it’s very hard for me. I still feel frustrated about what happened,” he tells CNN Sport.

“I sometimes asked the same question and couldn’t find the answer, but now we only have one direction. We need to win this war and start to rebuild the country.”

Shevchenko and tennis star Elina Svitolina have since been named ambassadors of UNITED24, an organization set up by Ukrainian President Volodymyr Zelensky with the aim of directing donations to the war effort.

The initiative has so far collected over $166M and there are other projects in the works in order to raise even more.

“The message is very clear. Since the war started, Ukraine needs a lot of help,” Shevchenko, who won the Ballon D’Or in 2004, says, adding that he’s in communication with Zelensky.

“I’m here, as part of the UNITED24 platform, to bring awareness and talk about the war to try to find the funds for humanitarian and medical aid, because this is what, at this moment, Ukraine needs.

“We need some support […] to keep going for our future, our independence, and our democratic way.” 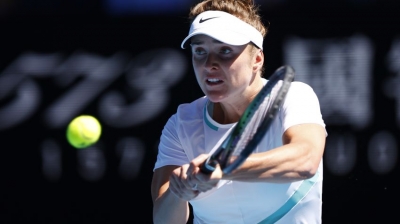 Elina Svitolina is on a 'mission' to help war-torn Ukraine

‘We need your help’

Shevchenko, who played for a number of high-profile European sides such as AC Milan and Chelsea, recently visited Poland to meet Ukrainian children who had fled the war and who are now facing an uncertain future as refugees.

While there, he spoke highly of tennis player Iga Swiatek and Polish football star Robert Lewandowski for doing their bit in raising money and awareness of the war.

“This is very important because, at the moment, athletes are icons for the younger generation,” Shevchenko adds.

The Russian invasion of Ukraine was covered extensively by the global media in the early stages but Shevchenko says it’s “normal” for the news cycle to move on.

However, he says it’s important that people are made aware of just how dangerous it is for those still living in Ukraine amid daily bombing.

The UN watchdog has warned that fighting at the occupied complex risks a “nuclear disaster.”

“We don’t have to forget what’s going on in Ukraine. Russians keep bombing and the war has never stopped,” Shevchenko says.

“Ukrainian people, for us, we need incredible support from the world. Please don’t forget about us. We need your help.” 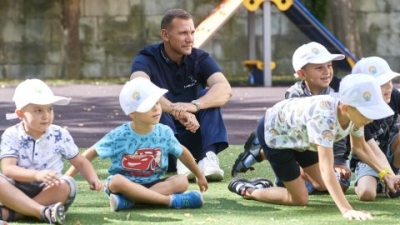 Shevchenko visits a Laureus supported Team Up programme, developed by War Child and Save the Children, on July 25, 2022 in Warsaw, Poland.

Shevchenko says he has seen just how powerful sport can be in spreading awareness and raising morale in the country since the war started.

In June, he watched the Ukrainian national team beat Scotland in its first competitive match since the invasion and, despite his country failing to make the World Cup in Qatar after losing to Wales, Shevchenko says the team gave their compatriots hope.

Ukraine’s midfielder Andriy Yarmolenko is mobbed by teammates after scoring the opening goal during the FIFA World Cup 2022 play-off semi-final qualifier football match between Scotland and Ukraine at Hampden Park in Glasgow, Scotland on June 1, 2022.

“Sport has an incredible power to unite people,” he says. “It was incredible to sit in the crowd of Scottish people and have incredible support for Ukraine.

“I felt like we were playing at home because the people united around the terrible war in Ukraine and wanted Ukraine to do well.

“I think the players did so well and tried very hard but it is sport, and in sport, there is only one winner.”

There are now plans for the Ukrainian Premier League to return later this month after fixtures were suspended when fighting broke out.

The country’s sports minister, Vadym Guttsait, said matches would be played behind closed doors and stadiums equipped with safety measures.

“It’s very important for the people, for the rest of the world – we can send the message that Ukraine is there,” Shevchenko says about the prospect of domestic football returning.

“Even if we’re at war inside the country, we are going to fight because we want to also live like normal countries, normal lives.”