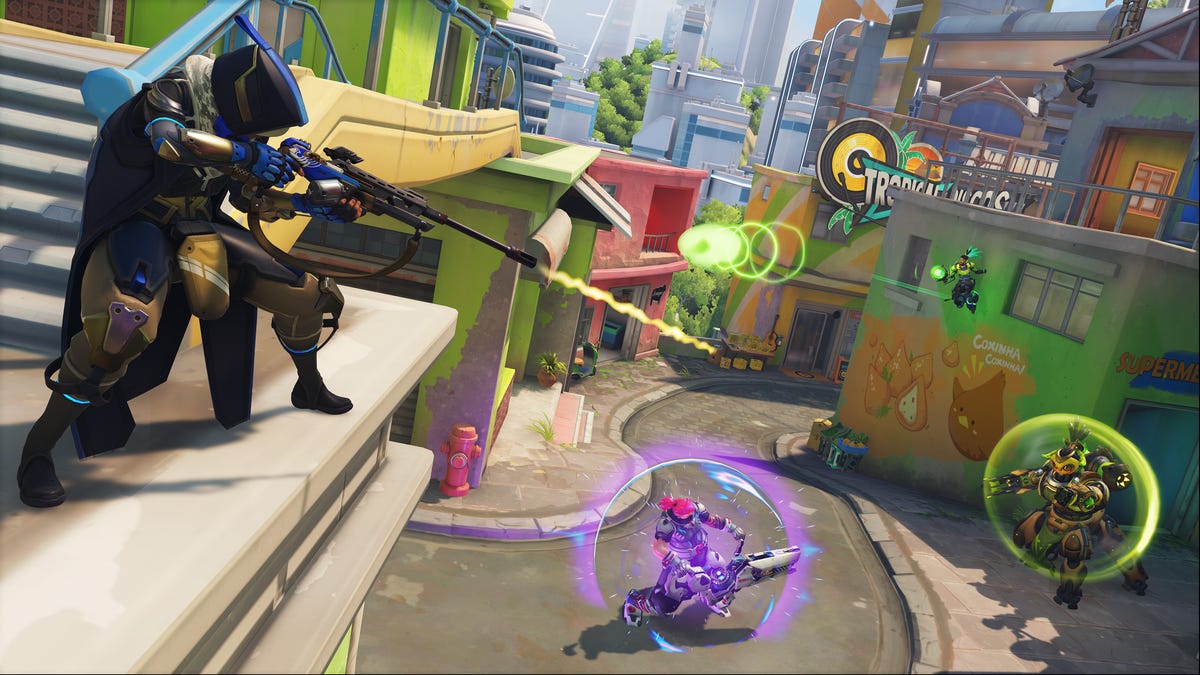 I spent more than 1,000 hours playing Overwatch. I’m ready to spend even more in Overwatch 2.
Blizzard

While I wait for Overwatch 2 to launch on Oct. 4, I’ve been thinking about my introduction to the original game. I first played Overwatch at a friend’s house in 2017. I played for only about an hour, but I was immediately hooked. I spent the rest of the night reading guides, watching videos and just generally soaking up everything I could about the game. I wanted to know who all the characters were, learn how to play them better and find out how much time I could realistically spend playing Overwatch in a day.

Sadly, the obsession faded over time. Overwatch turned into a slower, grindier game, muddying much of the initial fast-paced thrill that had originally enamored me. It was still interesting, and sometimes satisfying to play. But it wasn’t always fun. Most of my other friends turned to other games. And while I never completely abandoned Overwatch, I did eventually put down everything except for the game’s 4v4 Team Deathmatch mode, which was the only thing that still offered me the same joy as the early days.

Next Tuesday, Blizzard will release Overwatch 2, more than 1,000 days after the hero shooter sequel was announced. It’s a major shift for the series, changing the gameplay to two teams of five instead of two teams of six, and embracing a free-to-play, seasonal content model with new stuff coming every nine weeks. But the looming question is whether it can live up to the original game’s peak.

I’ve been lucky enough to participate in both of the Overwatch 2 betas this year, along with an early test build just ahead of launch, and everything I’ve experienced so far (especially the new heroes like Kiriko) has me desperately craving more. (And if you want instant access to some of the new content, you can buy the Watchpoint Pack on PC, Xbox Series X/S and Xbox One, PS4 and PS5 and Switch.)

My experiences with Overwatch 2 take me back to my favorite memories of original Overwatch: fast-paced, caffeine-fueled electricity. Shooting, healing, flying, crouching — the game is at its best when you’re in the action and making plays. The shift to 5v5, and specifically the move to one tank (a player that can absorb a lot of damage) per team invigorates the pace of the game.

There are also fewer things to slow the game down — crowd-control abilities have been tuned down and mostly given to tanks, which means you get to spend more time moving and shooting, and less time frozen or stunned.

And with only one tank per team to block damage, all players can feel the extra influence they have on the game — for better and for worse. Landing important shots could outright win fights for your team, but missing them could be the mistake that means a loss instead. There’s more pressure, yes, but it feels more rewarding. Matches give me that adrenaline-filled buzz that had been missing for so long and that makes me want to keep coming back for more. 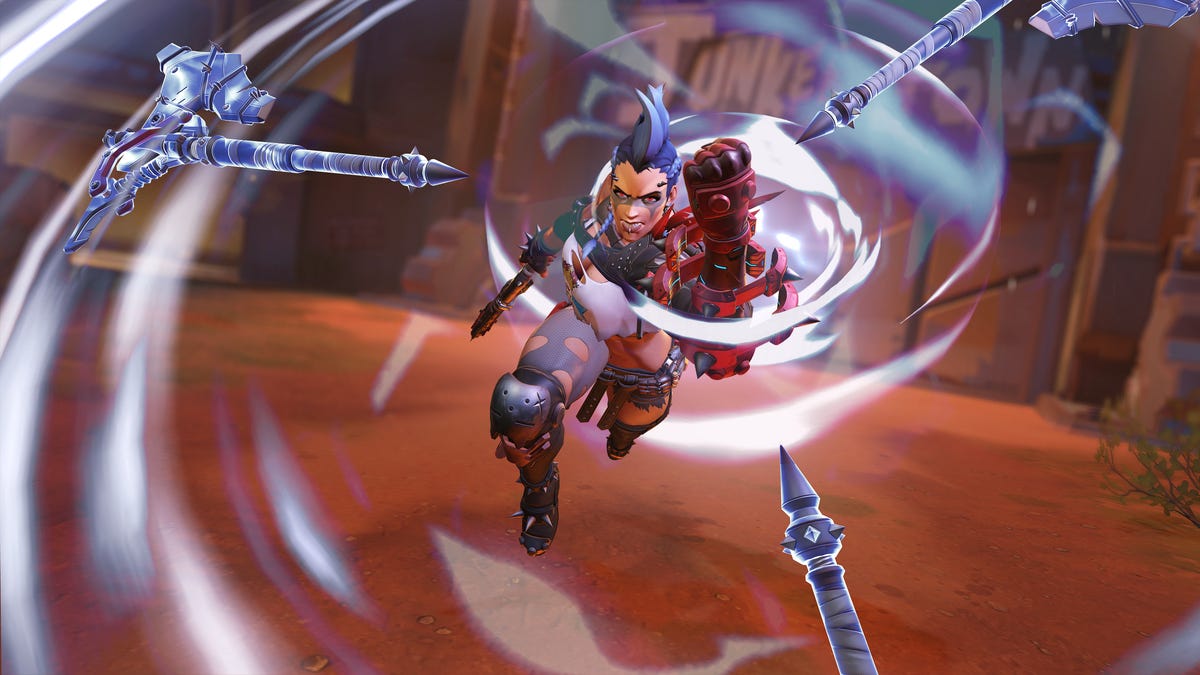 The thing that really hooked me on Overwatch was the lore — all the characters, their relationships and in-game interactions. The developers seem to understand how important those elements are for their game, because Overwatch 2 feels supercharged from the narrative side.

Lead Narrative Designer Gavin Jurgens-Fyhrie has said that there are 25,000 voice lines in Overwatch 2, and that there are some voice lines that only play in specific, unusual circumstances. These have been one of the most surprising highlights of the game. I don’t want to ruin the joy of discovery, but try putting Kiriko and Wrecking Ball on the same team if you want to hear some of the funniest prematch voice lines. Moments like that are such small details, but they have an enormous influence on how immersive the game feels.

These interactions give the game more narrative dimension and texture — I feel like I’m part of the game’s universe, rather than a meat person playing the game in front of a computer. And seeing how much has been squeezed into the PvP game mode makes me even more excited for the PvE game modes that are coming next year. 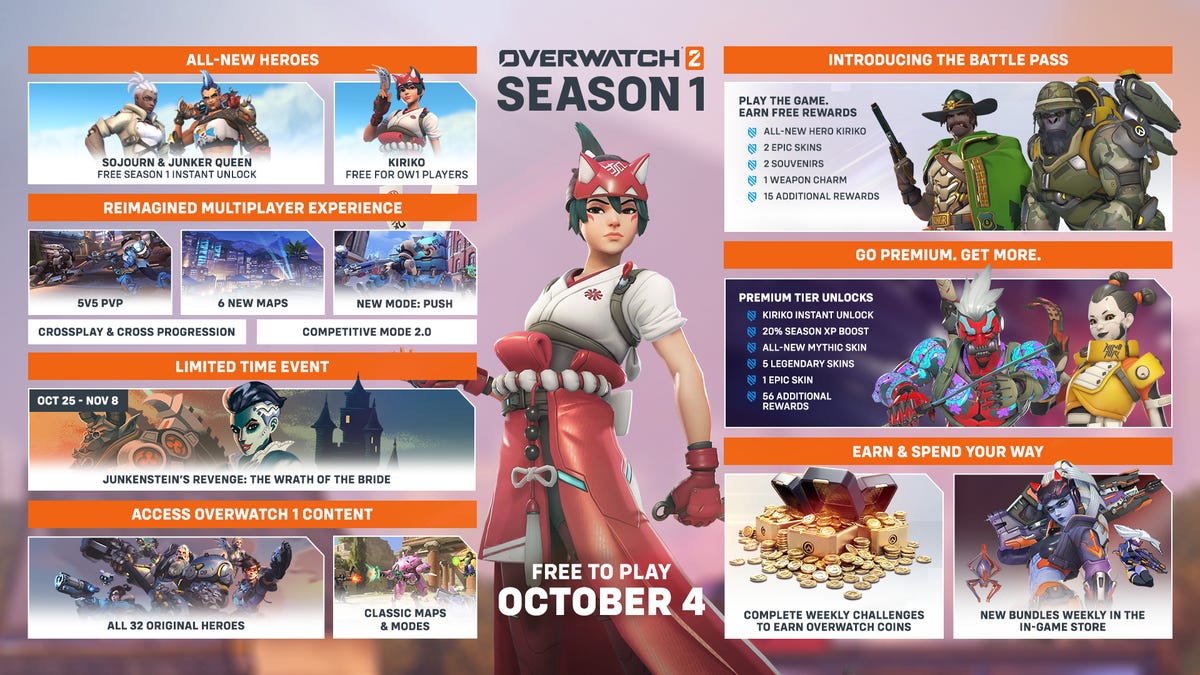 The first season of Overwatch 2 offers three new heroes and maps, plus a new Halloween event.

More than anything else, the thing that thrills me about Overwatch 2 is the thought of getting new content every nine weeks. The biggest thing that held back the original game was the dearth of content for the past two or three years. The last new hero in that game was Echo, who was added in April of 2020. A lot has happened since then — both in the world generally and specifically at Blizzard — but it was a difficult ask for players to stick around without anything new being added to the game.

Now the Overwatch team is promising us new heroes every 18 weeks (two in-game seasons, roughly every four months), with new maps in seasons where we don’t have new heroes. That means players get something major, either a map or a hero, each new season. The developers have also teased new game modes and future mythic skins — the new, customizable hero skins that honestly may be the coolest cosmetics I’ve ever seen in a video game.

My initial worry was that all the best content would get dumped into this first season. But I’ve gotten a look at some of the heroes, maps and more coming in future seasons, which was enough to reassure me that there’s plenty of cool stuff in the works in the months and even years to come. I’m talking, involuntarily-banging-my-fists-on-my-chair levels of excitement.

For the first time in two-and-a-half years, Overwatch will have a discernible future. And players will finally have something to look forward to.

Though the transition to a free-to-play, live service model feels like the right direction for Overwatch, I do worry about some of the details, like the battle pass system. The battle pass allows players to unlock in-game items and cosmetics by playing the game and completing challenges, or by spending in-game currency to advance the pass.

New heroes being released at level 55 of the free battle pass (or instantly with the paid battle pass) is a major and controversial change for the game. For the first time in Overwatch history, some players won’t have access to all heroes, and gaining access will take meaningful time for players who don’t purchase the premium battle pass. After a battle pass expires, any new heroes it contained will be unlockable through later challenges or in the shop. 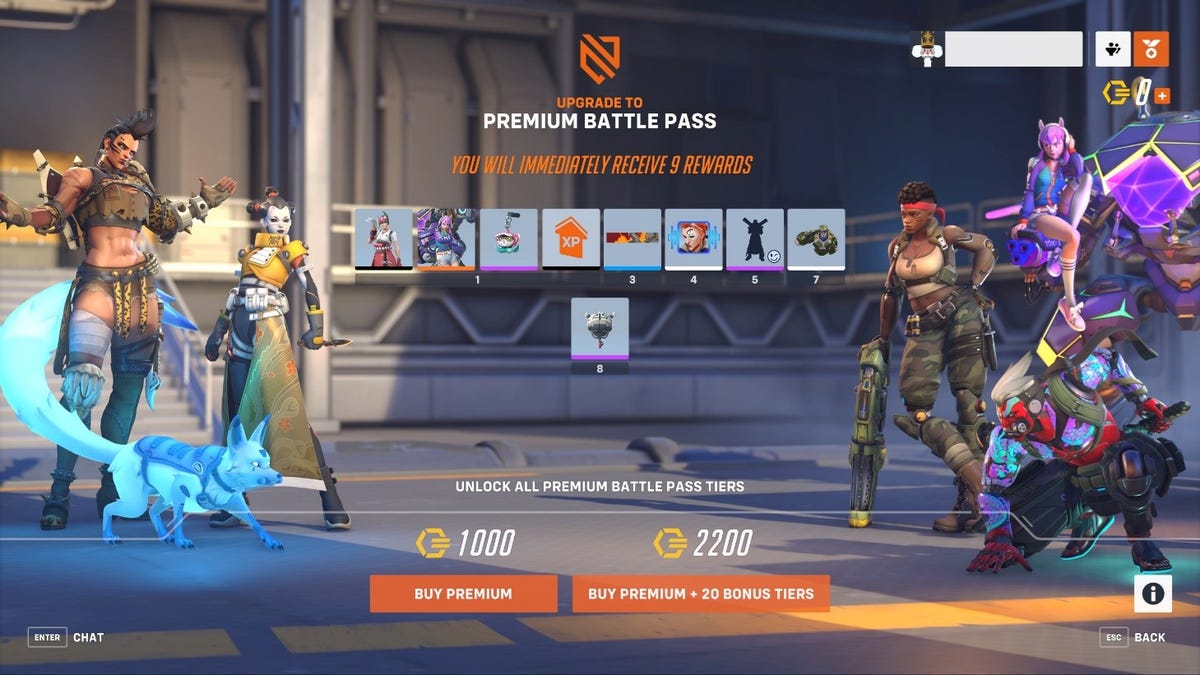 Battle Passes are standard fare for free-to-play games, and Overwatch 2 doesn’t do much to improve them.

Ultimately, the new battle pass does what battle passes are designed to do: ask players to sink a lot of time into the game in order to receive rewards. I think it’s an improvement over the loot box system — I’d much rather pay $10 each season than have to buy loot boxes. But, like all battle passes, it feels like the game is bargaining for your play time rather than simply inspiring it. I hope Blizzard moves away from the locked heroes model, because I think the battle passes offer such cool unlockables that they don’t need to resort to holding heroes hostage.

Even still, my hands-on experiences with the game have been overwhelmingly positive. In the recent early access, I’ve found myself signing on at odd hours just for the chance to play a few more games with people from other outlets. Those games don’t advance my battle pass, they don’t count toward challenges or unlock anything at all — they’re purely a chance for me to play the game even more.

And every night I want to sign on for just a few more games. A few more rounds as Kiriko. Another game as Ashe. Please, Blizz, just let me play. And that, more than anything else, tells me I’m going to be obsessed again.