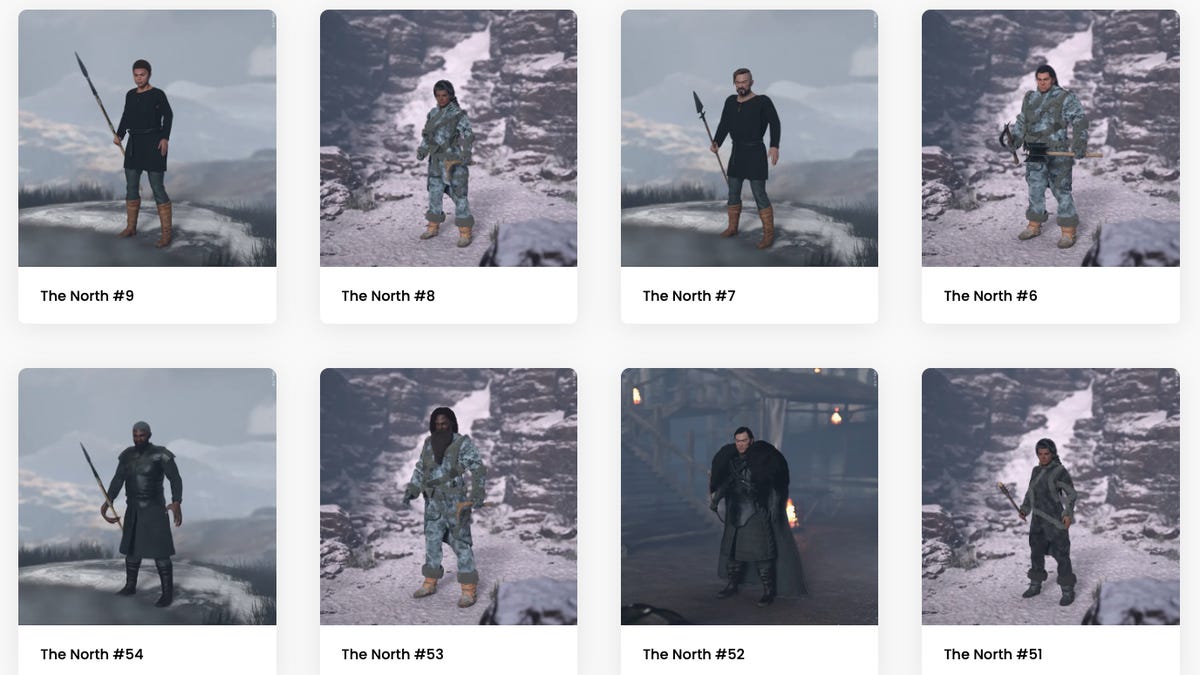 Eight of the 4,950 “hero” Game of Thrones NFTs. Some buyers criticized the official collection for poor artwork.
Nifty’s, Warner Bros.

When an official Game of Thrones NFT set hits the blockchain, regardless of your opinions of nonfungible tokens, you might at least expect the art to look good. Alas, no.

On Tuesday, Warner Bros.’ blockchain division launched Build Your Realm, a collection of Game of Thrones NFTs that will seemingly eventually double as a role-playing digital card game. It was sold in the form of Hero Boxes, each of which contained a set of cards: one “hero” card, three story cards and nine resource cards. There were 4,950 Hero Boxes, each of which sold for $150 (0.11 ether).

Nifty’s, an NFT marketplace that partnered with Warner Bros. for the drop, says resource cards will later be fused to create equippable weapons and armor for the hero character. That’s all fine and good. NFTs with vague promise of future value are exactly what most traders are after: an opportunity to speculate/gamble. But some buyers were let down when they opened their Hero Box and saw the artwork within.

Look at my man’s hands LOL

These are the official GoT NFTs. pic.twitter.com/6k85U91zLg

This Game of Thrones NFT collection is just like the the last season of the show.

No creative vision and terrible pic.twitter.com/I0v7cXai5N

If @GameOfThrones had actually committed more time, thought, and resources into their NFT art they could have been massively rewarded in the future📉 pic.twitter.com/iP5AEdGakP

The “hero” avatars are average 3D models of characters based in Westeros’ Northern region — a Winterfell maester, a warrior from the Night’s Watch, a crow from beyond the wall. But as you can see in the tweets above, some of the 3D models are, to put it mildly, below average.

One recurring problem among the Hero avatars is “salad fingers” — fingers that grotesquely curve around the weapon they’re clearly meant to be holding. Perhaps more egregious, however, are the resource cards in each pack. Twitter user SpicyTunaRoll discovered that many of these appear to have been taken directly from ShutterStock, a stock image provider.

The premise of NFTs, which are tokens on a blockchain, is that they allow digital goods to be owned as property. They are to digital goods what a deed is to a piece of land. HBO owner Warner Bros. is the latest company to try to grab a slice of the lucrative NFT pie. Fashion labels like Lacoste and Adidas have introduced their own NFTs, the latter partnering with the Bored Ape Yacht Club, while Nickelodeon, Looney Toons and Final Fantasy are among the entertainment brands that’ve tried to take advantage of the trend.

The story continues (credit to @spicyTunaR0ll)…

Even amid a bear market — both crypto and NFTs are massively down from this time last year — new collections occasionally break through and make serious money. Most recently, Donald Trump’s collection of poorly Photoshopped “digital trading cards” made over $5 million.

“This Game of Thrones NFT collection is just like the last season of the show,” tweeted user Justin Taylor, a former marketing director at Nike and Activision. “No creative vision and terrible.”

Ouch. Yet as poorly as the collection has been received by some people, in some ways it’s already a success. Just under 5,000 Hero Boxes sold out within seven hours, generating nearly $750,000. The Hero Boxes sold on Tuesday are the first of many drops in the Build Your Realm project, with subsequent collections focusing on different regions within Westeros.

Nifty’s and Daz 3D, the company that created the 3D art, didn’t immediately respond to requests for comment.