New York City Mayor Eric Adams on Tuesday called the migrant crisis that he says is overwhelming the Big Apple a “real embarrassment” on a national level as he claimed that there is “no more room at the inn” in the self-described sanctuary city.

Adams was asked about the migrant crisis that has reached into New York City as tens of thousands of migrants have made their way — including by bus — to the city in recent months.

“It’s a real embarrassment, I believe, on a national level, and we must have an appropriate response. We have had conversations around the issues on migrants for decades. This is a national issue. It must have a national response,” he said on WABC’s “Sid & Friends in the Morning.”

The host, Sid Rosenberg, responded by calling it a “Biden issue” and a “Democrat” issue.

“This is a Biden issue, a Democrat issue that now folks like you have to deal with. To be specific and fair, that’s just the truth,” he said.

“Well, when we think about the immigration reform, we’re going to need the help from Congress as well,” Adams replied. “I think the president has an obligation to deal with the immediate concerns. But when we talk about immigration, it is going to take a combination of the executive and the legislative body. We have to address this.”

The border has been hit by a historic number of migrants under President Biden’s administration, with more than 2.3 million encounters in FY 2022, and a FY 2023 so far on track to outpace those massive numbers. The White House has responded to criticism of its policies by pointing to record levels of funding for the Department of Homeland Security, as well as enhanced smuggling operations and cooperation with Western Hemisphere countries – and has called on Republicans to support its efforts to secure extra funding and to pass a sweeping immigration reform bill, which includes a pathway to citizenship for millions of illegal immigrants.

“What Americans should know is that the president has done the work to deal with what we’re seeing at the border since day one,” White House press secretary Karine Jean-Pierre said last month.

Texas, Arizona and Florida have all responded to the crisis with their own moves, including transporting migrants to liberal cities and jurisdictions. Texas Gov. Greg Abbott angered Adams by bussing migrants to the city for much of 2022 — as well as other sanctuary cities. Adams also said in the interview that Colorado would be sending migrants to the city as that state also faces migrant-related challenges in Denver. 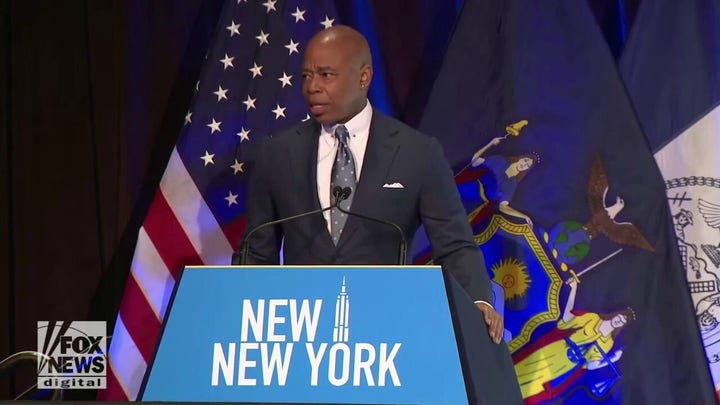 Adams stressed that an “onslaught” of migrants was not something that cities should be having to deal with — adding that his city had taken in over 30,000 migrants and that it was impacting “on the quality of life in New York.”

He then said it was “unfair” that local governments have to take on what he called a “national obligation.”

“There’s no more room at the inn, but we are compelled by local laws here that we must provide shelter and continue to move in the right direction,” he said.