Republican Florida Gov. Ron DeSantis used his fiery Tuesday inauguration speech to go after who he referred to as “jetsetters in Davos” and “technocratic elites” acting as a “threat” to freedom.

The rising GOP star and potential presidential candidate made the comments just minutes after being sworn in for a second term as Florida’s governor following his resounding November re-election victory.

“Now, fighting for freedom is not always easy because the threats to freedom are more complex and more widespread than they have been in the past,” DeSantis told the crowd. “The threats can come from entrenched bureaucrats in D.C., jetsetters in Davos, and corporations wielding public power. But fight we must. We embrace our founding creed, that our rights are not granted by the courtesy of the state, but are endowed by the hand of the Almighty.”

“We reject the idea that self-government can be subcontracted out to technocratic elites who reduce human beings to mere data points. We insist on the restoration of time-tested constitutional principles so that government of, by, and for the people shall not perish from this earth,” he added.

DeSantis has long been a critic of the global leaders, or “elites,” participating in the World Economic Forum’s annual gathering in Davos, Switzerland with the purpose of coming up with global solutions to issues facing the planet, including climate change, economic issues and global conflict. 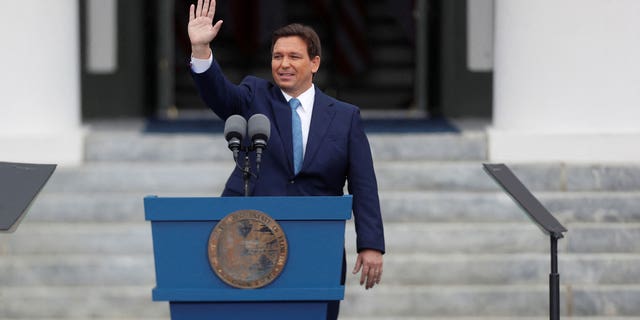 Florida’s Governor Ron DeSantis after taking the oath of office waves to those in attendance at his second term inauguration in Tallahassee, Florida, U.S. January 3, 2023.
(REUTERS/Octavio Jones)

In September, DeSantis told the National Conservatism Conference that his state would reject the “corrupt ruling class” and its attempts to influence the way of life in America.

DeSantis has remained quiet about his plans for the 2024 presidential election and whether he would make a run for the White House, however his popularity in Florida, made evident by a whopping 19-point victory over his Democratic opponent in November, has excited Republicans across the country in hopes that he’ll eventually toss his hat into the ring.