Nikki Bella recently explained why she decided to wear a wedding dress she bought while engaged to John Cena when she married Artem Chigvintsev last summer.

“I went back and forth with that decision,” Bella, 39, told Us Weekly. “For me, it [reflects] how I stand as a strong woman, I was like ‘Wait, why should I not wear what I love? Because of my past?’ It just didn’t make sense to me.”

The WWE star said she had “the moment” with the dress when she originally bought it before meeting Chigvintsev: “It was all something that I dreamed of.”

She said she wouldn’t wear it only if her fiancé had a problem with it. 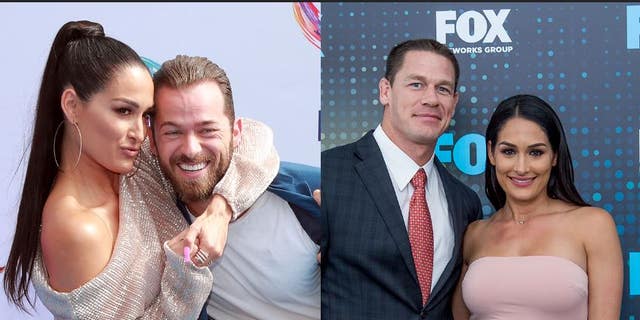 Nikki Bella broke up with John Cena in 2018 and married Artem Chigvintsev in 2022.
(Rich Fury/Roy Rochlin/FilmMagic)

“He looks at it as just a material thing,” the “Nikki Bella Says I Do” reality star told the outlet, adding that Chigvintsev was “cool about it.”

“It did not bother me at all,” the “Dancing with the Stars” pro said.  “I didn’t think it was going to be that big of a deal for people to react how I reacted … I think [if there’s] an issue with it, they’re bringing some other energy into our happiness.”

According to the outlet, Nikki had four different looks for the special day, but it’s not immediately clear which one was from her relationship with Cena.

The couple met when Bella was a contestant on “Dancing with the Stars” in 2017, but she was with Cena at the time.

Bella and Cena got engaged the same year but broke up in 2018 because they wanted different things, including that Cena wasn’t interested in having children. Bella gave birth to her first son, Matteo, with Chigvintsev in 2020.

A rep for Bella did not immediately respond to Fox News Digital’s request for comment.