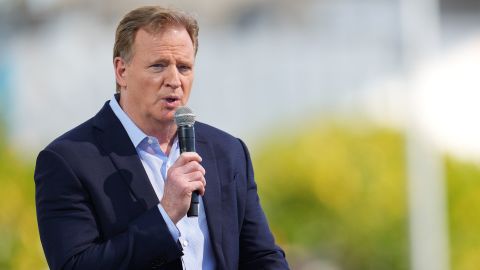 The NFL owners have approved an unprecedented postseason plan following the cancellation of Monday night’s Buffalo Bills-Cincinnati Bengals game, which would allow the title game for the American Football Conference to be held at a neutral site.

The league held a special virtual meeting with all 32 team owners or their designee on Friday to determine possible playoff scenarios, because two teams, the Bills and Bengals, will have played fewer regular season games.

Monday night’s game between the Bills and Bengals was canceled after Damar Hamlin collapsed on the field and was taken to the hospital. While other teams will have played 17 games, Buffalo and Cincinnati will enter the playoffs having played 16 contests.

Damar Hamlin's breathing tube is out and he told team, 'Love you boys,' via video, Buffalo Bills say

“I recognize that there is no perfect solution,” NFL Commissioner Roger Goodell said Thursday after the proposal was approved by the competition committee and before it received approval from the clubs. “The proposal we are asking the ownership to consider, however, addresses the most significant potential equitable issues created by the difficult, but necessary, decision not to play the game under these extraordinary circumstances.”

The NFL owners approved the unique plan to host the AFC Championship game at a neutral site if the two participating teams played an unequal number of games and both teams could have been a potential top seed had the Bills-Bengals game been played to its conclusion.

The Kansas City Chiefs (13-3) go into the weekend as the potential top seed, which in normal years means it would play all its playoff games at home.

The Bills are 12-3 and hold the No. 2 seed before the final games of the season on Saturday and Sunday. The Bengals are No. 3 in the playoff picture at 11-4. Teams are seeded by regular season winning percentage, the NFL said Friday.

Buffalo Bills’ Damar Hamlin is examined during the first half of an NFL football game against the Cincinnati Bengals, Monday, Jan. 2, 2023, in Cincinnati. (AP Photo/Jeff Dean)

There are three scenarios in which the AFC title game would be at a neutral site. They each involve the Chiefs and Bills having the same result (win, loss or tie) this weekend.

Here are the possibilities, per an NFL release

• Scenario 1 – If Buffalo and Kansas City both win or both tie, a Buffalo vs Kansas City championship game would be at a neutral site.

• Scenario 2 – If Buffalo and Kansas City both lose and Baltimore wins or ties, a Buffalo vs Kansas City championship game would be at a neutral site.

• Scenario 3 – If Buffalo and Kansas City both lose and Cincinnati wins, a Buffalo or Cincinnati vs Kansas City championship game would be at a neutral site.

The owners also approved Friday a plan to use a coin flip to determine the home field if the Bengals and Baltimore Ravens (10-6) end up as opponents in a wild card game.

The Ravens and the Bengals play Sunday and, with the schedule imbalance, the Ravens no longer have a chance to win the AFC North.

“If Baltimore defeats Cincinnati in Week 18 it will have defeated Cincinnati, a divisional opponent, twice but will not be able to host a playoff game because Cincinnati will have a higher winning percentage for a 16-game schedule than Baltimore will for a 17-game schedule,” the NFL explained in its Thursday news release. A Baltimore victory would push the Ravens to an 11-6 record while the Bengals would be 11-5.

Had both teams finished 11-6 the Ravens would have won the division based on defeating the Bengals twice.

The scenarios vote needed at least 24 of the 32 owners to approve the resolutions to pass.