NASA’s Hubble Space Telescope recorded a star’s final moments in detail as it was eaten by a black hole.

The agency said the process twisted the star into a donut-like shape in the process.

When a star gets close enough, the gravitational grasp of the black hole violently rips it apart, belching out intense radiation in what is known as a “tidal disruption event.”

Astronomers are using the telescope to better understand what happens, utilizing its powerful ultraviolet sensitivity to study the light from the AT2022dsb “stellar snacking event.” 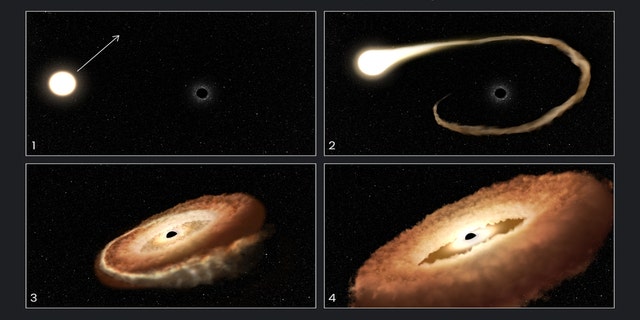 The star is located nearly 300 million light-years away at the core of the galaxy ESO 583-G004.

The agency recently reported that a high-energy space observatory spotted another such event in March 2021. 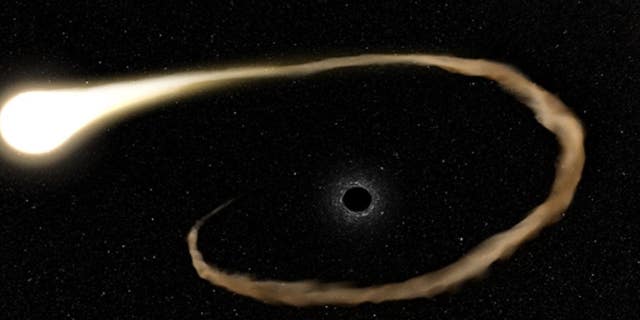 “We’re excited because we can get these details about what the debris is doing. The tidal event can tell us a lot about a black hole,” Emily Engelthaler, of the Center for Astrophysics | Harvard & Smithsonian, said in a statement.

For any given galaxy with a quiescent supermassive black hole at the center, it’s estimated that stellar shredding happens only a few times over every 100,000 years.

This AT2022dsb event was first caught on March 1, 2022, by the All-Sky Automated Survey for Supernovae, a network of ground-based telescopes. 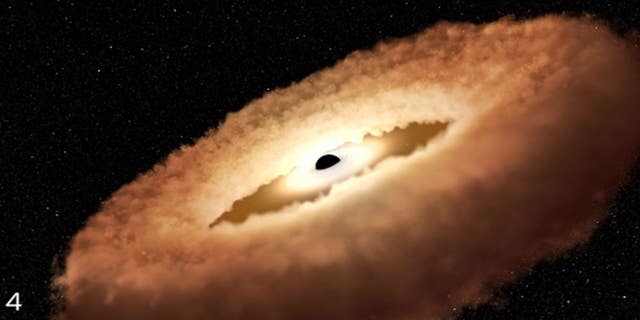 The stellar remnants are pulled into a donut-shaped ring around the black hole, and will eventually fall into the black hole, unleashing a tremendous amount of light and high-energy radiation.
(Credits: NASA, ESA, Leah Hustak (STScI))

The collision was close enough to Earth and bright enough due to ultraviolet spectroscopy over a period of time that is longer than normal.

“Typically, these events are hard to observe. You get maybe a few observations at the beginning of the disruption when it’s really bright. Our program is different in that it is designed to look at a few tidal events over a year to see what happens,” Peter Maksym, of the Center for Astrophysics, explained. “We saw this early enough that we could observe it at these very intense black hole accretion stages. We saw the accretion rate drop as it turned to a trickle over time.”

The data are being interpreted as coming from the donut-shaped area of gas that was once the star.

The area is known as a torus, swirling around a black hole in the middle.