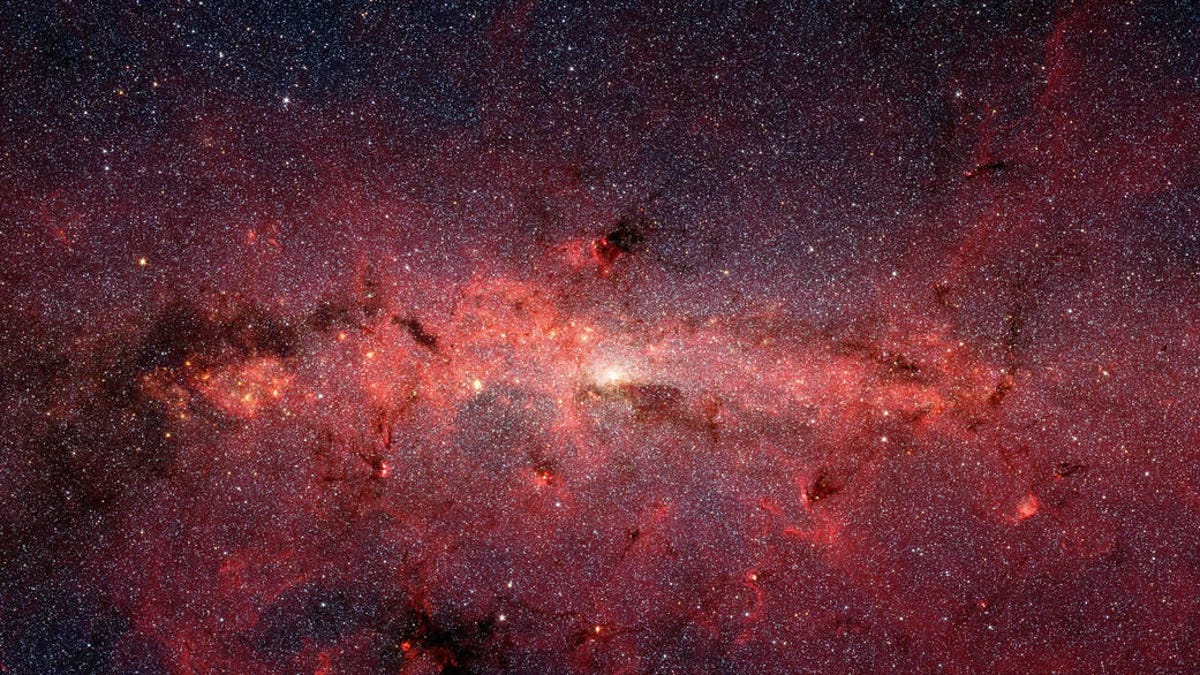 Our Milky Way’s center is normally hidden from standard, optical telescopes due to clouds of dust and gas. But the Spitzer Space Telescope’s infrared cameras penetrated much of the dust, revealing stars of the crowded galactic center. A million miles from this spot might lie the mysterious edge of our galaxy.
NASA, JPL-Caltech, Susan Stolovy (SSC/Caltech) et al.

Not only is trying to visualize the universe’s size a daunting — and kind of disturbing — task, but it’s also a paradoxical one. In a sense, our cosmic expanse is both finite because it hasn’t existed forever… and infinite because it’s constantly ballooning in every direction. What’s much more manageable, in terms of cosmic cartography, is mapping out how big all the stuff within our universe seems to be.

And what better place to start than our very own Milky Way galaxy? This week, at an annual American Astronomical Society Meeting in Seattle, astronomers announced they may have finally defined the Milky Way’s farthest frontier.

In short, they estimate that our realm stretches more than a million light-years from its galactic center, which is nearly halfway to our neighboring galaxy, Andromeda.

“This study is redefining what constitutes the outer limits of our galaxy,” Raja GuhaThakurta, professor of astronomy and astrophysics at the University of California, Santa Cruz and co-author of a study on the findings, said in a statement.  “Our galaxy and Andromeda are both so big, there’s hardly any space between the two.”

For context, one light-year is equivalent to about 5.88 trillion miles (9.46 trillion kilometers) and at a smooth 3,000 miles per hour — close to speeds of Artemis I’s Orion spacecraft which soared around the moon and back last year — it’d take you over a billion hours to travel such a distance.

I don’t even want to write out how long it’d take to travel not just one, but a million light-years.

The clues were in the stars

Basically, you can think of the Milky Way’s territory as separated into three sections.

First, there are the iconic spiral arms (one of which holds our solar system) anchored within what’s known as the “thin disk,” pretty much a flat disk speckled with stars, planets and moons that’s about 100,000 light-years across. 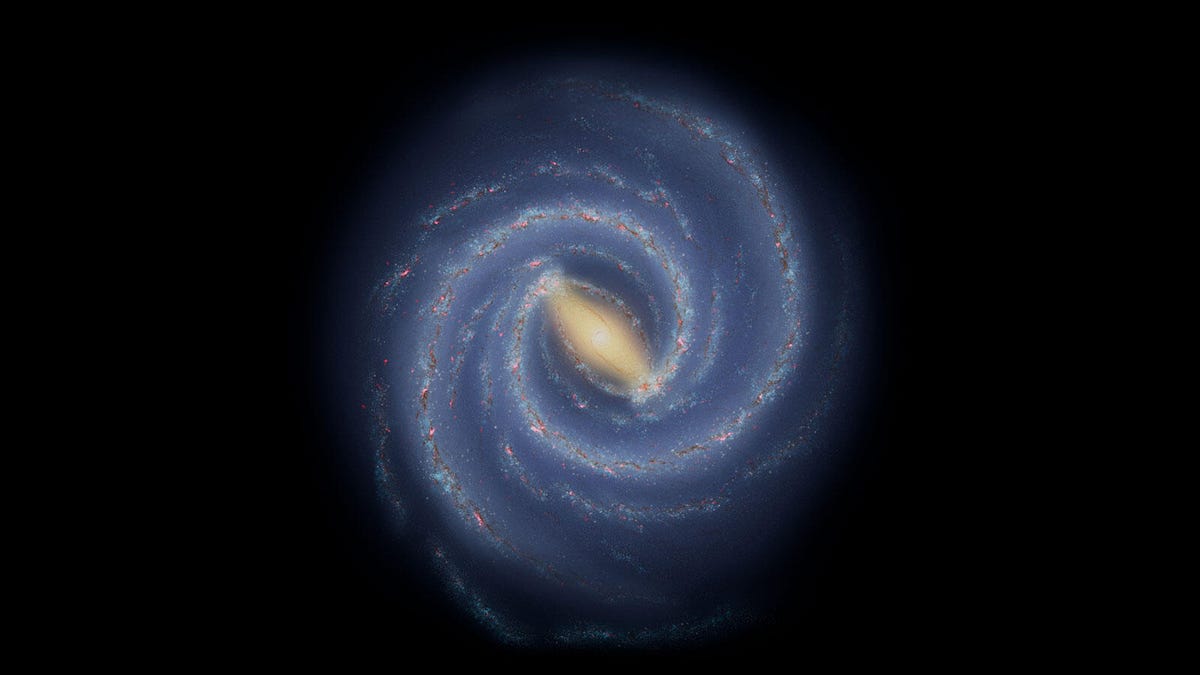 This illustration shows what we think the Milky Way looks like, with two large spiral arms.

Surrounding the central, bulging area of this disk is an inner halo, which contains some of the oldest stars in our galaxy and extends for hundreds of thousands of light-years in every direction.

And finally, there is the outer halo.

This elusive area, which floats around the inner halo, is dominated by dark matter (cue spooky music) and constitutes most of our galaxy’s mass. Yet it’s “the hardest part to study because the outer limits are so far away,” GuhaThakurta said. “The stars are very sparse compared to the high stellar densities of the disk and the bulge.”

However, GuhaThakurta and fellow researchers came up with an idea on how to figure out where the Milky Way’s outer halo ends. 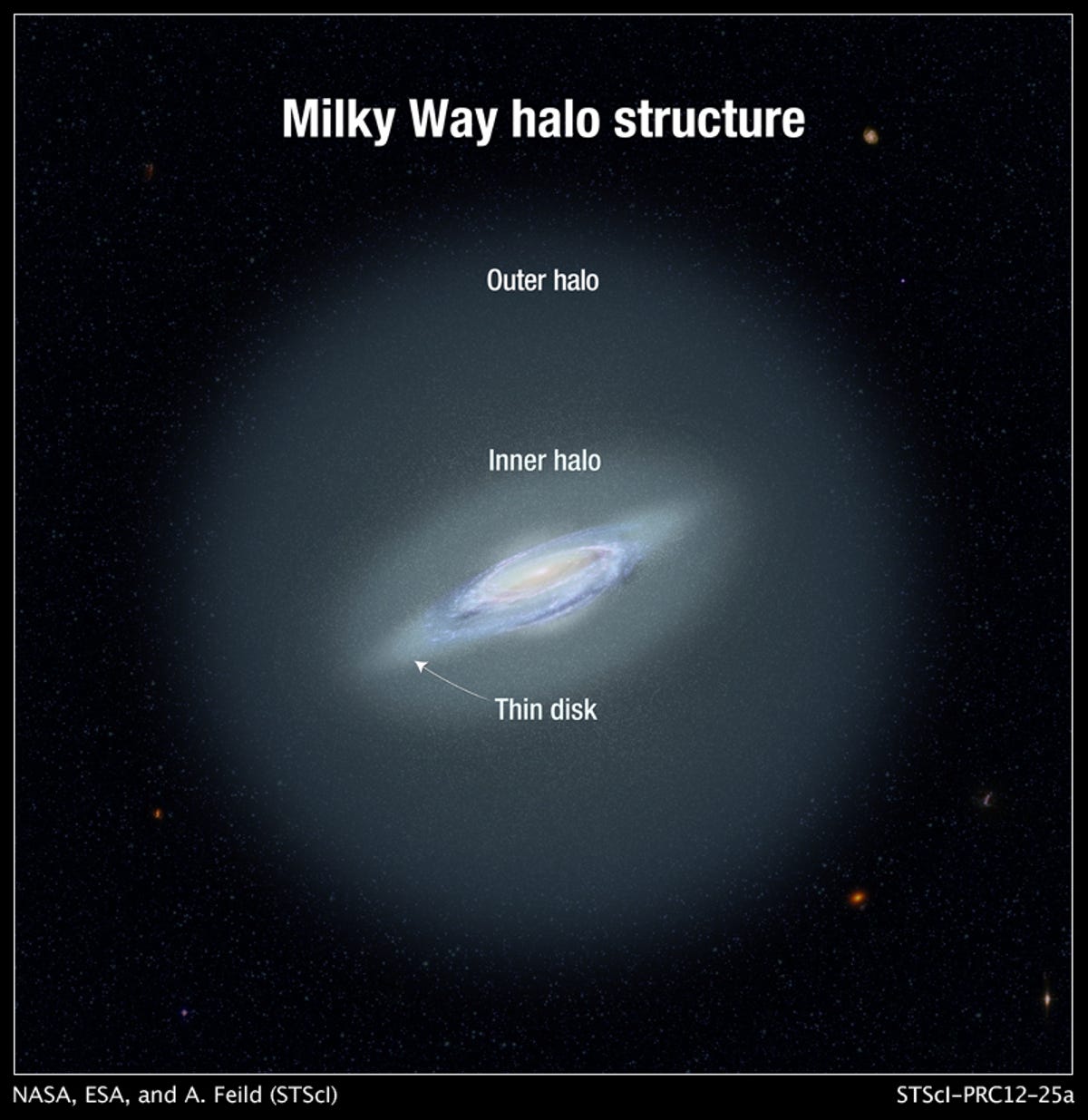 This illustration shows the Milky Way galaxy’s inner and outer halos. A halo is a spherical cloud of stars surrounding a galaxy.

They tracked what’re known as RR Lyrae stars living in its hazy glow. In a nutshell, RR Lyrae stars are special stellar bodies that sort of pulse in their brightness. They regularly expand and contract, showing up to astronomy machines on Earth as glowing a little harder, then fading away gently — over and over again.

“The way their brightness varies looks like an EKG — they’re like the heartbeats of the galaxy — so the brightness goes up quickly and comes down slowly, and the cycle repeats perfectly with this very characteristic shape,” GuhaThakurta said. “In addition, if you measure their average brightness, it is the same from star to star. This combination is fantastic for studying the structure of the galaxy.”

In other words, RR Lyrae stars are better for gauging distance because it’s possible to get an average brightness on them. Other kinds of stars, for instance, might be really bright because they’re close by or because they’re just… really shiny. RR Lyrae stars are less questionable. Their brightness is easily connected to their distance, so they help scientists calibrate the structure of our entire universe.

“Only astronomers know how painful it is to get reliable tracers of these distances,” Yuting Feng, a doctoral student at UCSC and lead author of the study, said in a statement.

Feng and GuhaThakurta hit the jackpot when they repurposed data collected by the Next Generation Virgo Cluster Survey, which imaged a large cluster of galaxies near the Milky Way. During its tenure, this program just so happened to also capture a bunch of foreground stars in the same field — 208 of which were RR Lyrae stars.

“The data we used are sort of a byproduct of that survey,” Feng explained. “This robust sample of distant RR Lyrae stars gives us a very powerful tool for studying the halo and testing our current models of the size and mass of our galaxy.”

Plus, according to Feng, the team’s observations confirmed long-standing theoretical estimates of the outer halo’s boundary.