NASA Webb Might’ve Detected the Ingredients for Life in a Cold, Dark Cloud 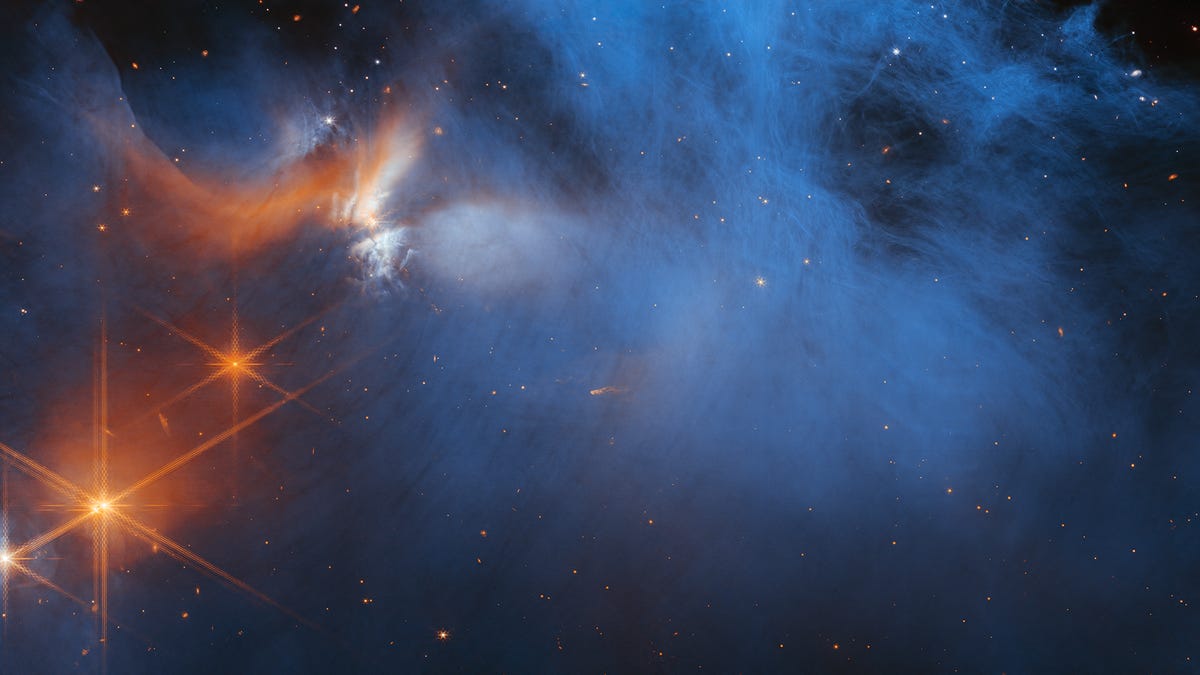 A few hundred light-years away from Earth (exceptionally close, cosmically speaking) lies a mysterious expanse called the Chamaeleon I molecular cloud. In an already cold and dark universe, this misty stellar nursery is considered one of the coldest — and darkest — districts known to date. And it is often in space’s most shadowed corners where we find the brightest embers of our universe’s evolution and history.

On Monday in the journal Nature, scientists working with the James Webb Space Telescope announced that pointing this machine toward Chamaeleon I has revealed a stunning menagerie of icy molecules hidden within the cloud. But these aren’t just plain old molecules. They’re the kind of interstellar bricks that’ll one day fuse into the next generation of stars, planets — and potentially even lead to the inception of life as we know it.

Sure enough, on top of structural icy bits such as frozen carbon dioxide, ammonia and water, the JWST also managed to detect evidence of what’re known as “prebiotic molecules” in the cloud, according to a press release on the find. That simply refers to specific chemicals known to foster the right conditions for precursors of life.

“Our identification of complex organic molecules, like methanol and potentially ethanol, also suggests that the many star and planet systems developing in this particular cloud will inherit molecules in a fairly advanced chemical state,” Will Rocha, an astronomer at Leiden Observatory who contributed to the discovery, said in a statement. “This could mean that the presence of prebiotic molecules in planetary systems is a common result of star formation, rather than a unique feature of our own Solar System.”

In other words, maybe humans, flowers and Earthling microbes aren’t so special. Maybe we’re not alone in the universe because the ingredients that made us are extraordinarily common byproducts of baby stars growing up into big, bad suns.

OK, to be clear, this doesn’t mean we’ve found proof of alien life or anything drastic like that. I mean, we don’t exactly know what’s going to happen to these cloud-borne molecules over time as mini-solar systems doppelgangers actually start to form.

However, it does open some (very preliminary) avenues in the hunt. “These observations open a new window on the formation pathways for the simple and complex molecules that are needed to make the building blocks of life,” Melissa McClure, an astronomer at Leiden Observatory and lead author of the paper, said in a statement.

In a nutshell, the JWST works by using its gold-plated mirrors and high-tech instruments to detect specific wavelengths of light that fall within the infrared region of the electromagnetic spectrum.

This infographic illustrates the spectrum of electromagnetic energy, highlighting the portions detected by NASA’s Hubble, Spitzer and Webb space telescopes.

Infrared light is super different from the regular light we’re used to seeing with our naked eye. Unlike the latter, known as visible light, infrared wavelengths are essentially invisible to us. Yet a lot of light emanating from different areas of the universe — particularly from inside star-forming clouds — arrives at our vantage point on Earth as invisible, infrared light.

That’s why the JWST is such a big deal.

This machine is literally constructed to decode all of that deep space infrared light and turn it into something understandable by our minds and technology — elucidating a wealth of cosmic secrets otherwise shielded from our sight.

And, you guessed it, while the JWST was observing Chamaeleon I, it caught a bunch of infrared wavelengths associated with the icy molecules hidden inside the haze, and turned it into information digestible by the team of scientists operating the scope.

Basically, light emitted by a star in the background of the cloud kind of touched everything in its path on the way to the JWST’s lenses, located a million miles away from our planet. More specifically, as the wavelengths passed through the cloud itself, they came into contact with all those icy molecules floating inside.

Thus, some of the starlight was absorbed by those icy molecules, leaving a sort of fingerprint in its wake. Such fingerprints are called absorption lines — and once analyzed, can help deduce whatever stuff created them. In this case, the fingerprints led scientists to learn about, of course, the icy molecules.

“We simply couldn’t have observed these ices without Webb,” Klaus Pontoppidan, Webb project scientist at the Space Telescope Science Institute, who was involved in this research, said in a statement. “In regions that are this cold and dense, much of the light from the background star is blocked and Webb’s exquisite sensitivity was necessary to detect the starlight and therefore identify the ices in the molecular cloud.” 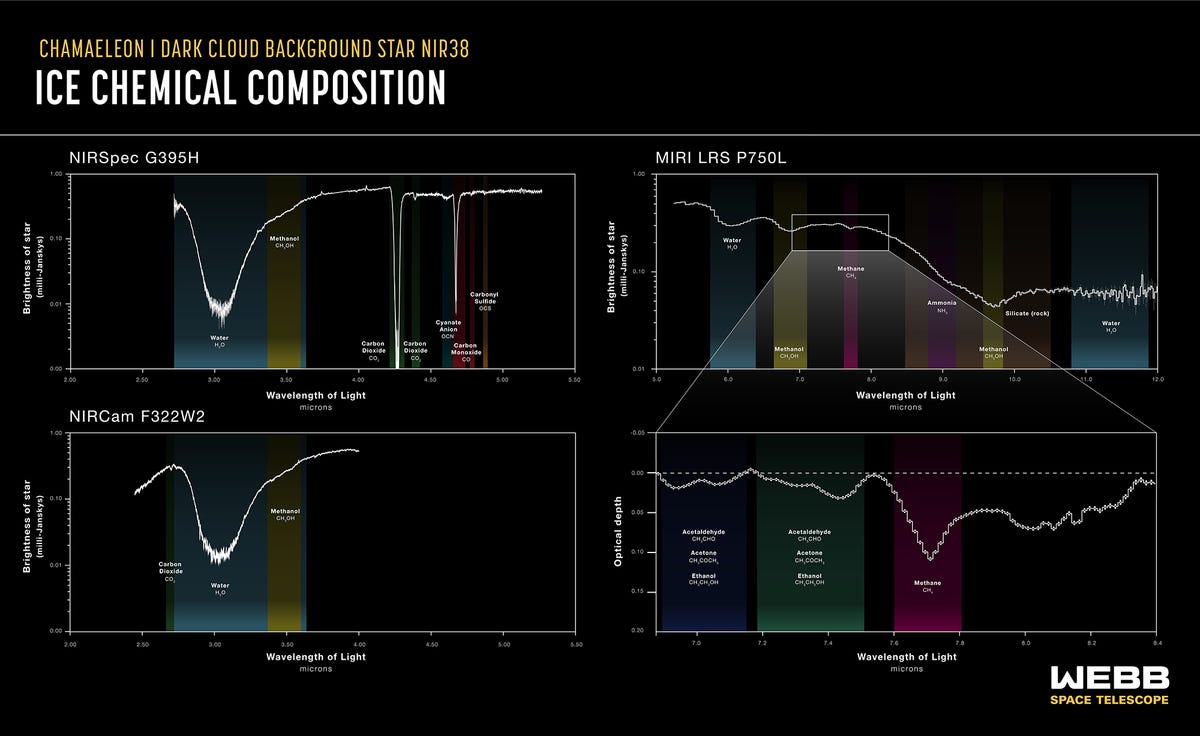 These graphs show spectral data from three of the James Webb Space Telescope’s instruments. In addition to simple ices like that from water, the science team was able to identify frozen forms of a wide range of molecules, from carbon dioxide, ammonia and methane to the simplest complex organic molecule, methanol.

Going forward, the team intends to see how these ices and prebiotic components evolve over time in Chamaeleon I as planet-forming disks start to arise in the region. As McClure explained, “this will tell us which mixture of ices — and therefore which elements — can eventually be delivered to the surfaces of terrestrial exoplanets or incorporated into the atmospheres of giant gas or ice planets.”